[mks_dropcap style=”square” size=”35″ bg_color=”#505556″ txt_color=”#ffffff”]B[/mks_dropcap]rian is irritated that the television isn’t working. I tell him not to do it but he’s sixteen and he does what he wants. He grabs my broom. He inspects the handle end, as if that will make a difference to his genius plan. It’s hailing outside. My wife is in the kitchen with the little ones. I am in the living room with Brian and my broom. He tells me, Mom, I can do it. I’ve done it before. I tell him, Go for it, turbo. My wife doesn’t hear. There’s no way my wife hears. If my wife heard what I told him, she would have already been out here, giving me that look and taking my broom away from Brian. Besides, he probably won’t actually do it.

He opens the sliding glass door. I follow him. The hailstones are the size of dimes. They ping ping ping on our plastic Walmart furniture that he uses as a boost to the roof. The storm is dying down. My wife doesn’t hear. I watch him as he pulls himself up by the gutter. I think about telling him to get down. I want to tell him, You’re going to knock that gutter off and your ma is gonna be pissed. I don’t. I’m interested in what he’s going to do next and he’s been on the roof plenty of times. He takes his friends up there during sleepovers to take shots from our vodka bottles we keep in the freezer. He doesn’t think we know but I know because he’s replacing what they drink with water. Water freezes. Vodka doesn’t. I didn’t tell my wife. I get a feeling in my gut and I peer through the door. My wife is still involved in an elaborate dishwashing assembly line with our youngest. She doesn’t see.

He is on all fours on our roof. He reaches toward me. I hand him my broom. He’s wearing one of my wife’s old t-shirts from high school. It’s red and has a lion on it. I can’t remember what high school she went to. His hair is in his face and I’m the one who told him he could keep it long if he wanted as long as he took care of it. He doesn’t take care of it. His shampoo and conditioner are still under the sink and he doesn’t know that we know he washes everything with Axe body wash.

He flips the broom around so that he’s holding the handle. Why did you inspect that end if that’s the end you’re going to hold? I ask him and he looks at me with that look, the same one his ma will give me when she hears about this. I peek back inside. She doesn’t hear. I’m supposed to hold on to the broom bristles, Mom? C’mon. He prods the antenna with my broom. I look at the TV’s reflection in the glass. No improvement. I tell him this. I am about to tell him that we’ll fix it in the morning, in the light, when Ma’s at work. Before I can speak, he gets closer and prods harder—CRACK!

He slumps forward. He jerks back up. I look inside. The TV is working. I look back at Brian. My wife hears the noise. She’s giving me that look through the glass as she rushes outside to me and Brian and my broom, blocking our youngest from following her. I climb on top of the patio furniture and shake his foot. Brian! He turns to me and he’s smiling with all of his crooked teeth and shakes his head while pointing to his ears with the hand that’s not holding my broom. He doesn’t hear me.

What the hell are you two doing? Brian slides down on his belly. His long gangly legs are hanging off of the edge, the gutter is bending, I’m waiting for the snap. He slides down and he holds on to the gutter with his pointing hand, still clutching my broom with his other. He falls to his ass: no snap, just a thud. I smile. He laughs. She gives me that look. What were you doing? I shrug. I squat next to Brian and put my hand on his shoulder to help him up. Instead, he lies back on the pavement and lets go of my broom.

Brian! Your hand! I didn’t notice the burn until now. He shakes his mop head, crookedly smiling again, pointing to his ears again. The palm of his hand is red, blistered, boiling. He covers his face with his burn because the dying remnants of falling hail keep going into his mouth. His eyes close. He’s still laughing. I want to laugh, too. His laugh is contagious but my wife is not laughing.

Why would you let him do that? She is so much older than me. She is younger than me. You know him! I point to him: his burned hand covering his mouth, his eyes still closed, his hair on the pavement. I cannot believe you. She kneels down next to our son, next to me. She looks at me with that look again as she tosses my broom further into the yard. Seriously? I retrieve it. By the time I come back, Brian’s arm is wrapped around his ma’s neck and she’s opening the gate to the driveway. We’re going to the hospital. Watch them.

Time for bed. The words are out before I’ve closed the glass door behind me. The girls are crying. They hug my legs. I keep walking to their bedroom. I go to their dresser and I pull out matching pairs of pajamas. I put them on their beds but they just stand at the door. Is Brian okay? I nod and gesture toward their beds. They rub their eyes and come to me. The older one looks at the pajamas and goes to their dresser. She pulls out matching pairs of underwear and keeps one for herself but tosses the other on her sister’s bed. Ma says you should always wear clean panties to bed. I can’t believe she uses that word with them. I fucking hate that word. Okay, that’s fine. Get changed. They change and they get under their covers and the little one looks at me so expectantly that I almost cave and tuck them in. Good night, girls.

Mom, leave the door open. I oblige. I go downstairs and check my phone. They are in the ER. She texts with perfect grammar. U ok? I don’t text with perfect grammar. No. I’ll let you know what the doctor says. I pour a glass of wine. Well, fuck you too, then. I’m glad she doesn’t hear me. I lean on our kitchen island and put my head in my hands, fingering my thinning hairline, pulling some of the hairs out. They’re still wet from being outside in the storm with Brian and my broom. I think back to his birth.

He came out of her so slowly. It literally took days for him to wedge himself the wrong way, forcing our doctor to stick his hands in and twist him out like a stubborn cork from one of our college wine bottles. He didn’t cry right away. The first thing he did was sneeze. The second thing he did was look into my eyes. The third thing he did was cry. She couldn’t get him to latch onto her without three nurses’ help and when he did, she said it hurt too much. Brian, be nice to your ma. She didn’t laugh. She cried.

He cried at night for nearly a year. She cried for two. I lost her then. She would hand him to me at three a.m. and he’d stop crying and she’d start. I’m a horrible mother. With the hand that wasn’t holding Brian, I tucked the hair behind her ears and I played that game where you pretend to put makeup on each other for a face massage. I rubbed her tears into her cheeks, pretending it was dark red blush. I drew on a clown smile. I drew on raised eyebrows like the ones she had when I told a joke she wanted to laugh at but deemed too inappropriate. Eventually her breathing would deepen and Brian would shit himself and I could leave the room to breathe with him while I picked out a new onesie. That’s when we became us.

He always gravitated toward me. We have no biological connection. It killed her. Legally, he was ours. She considered him hers. I read to him every night and he cried when I left but didn’t look up when she walked in. When he was five, he told her he hated her and that he wished I was his only mom. She gave me that look and she acted like she didn’t hear him. I talked to him later. It hurts Ma’s feelings when you say stuff like that. He nodded at me and hugged his bear and he never said anything mean to her again. She let me hold her as we slept for weeks.

He found me last year in the guest room of our house. She had kicked me out of bed because I told her to stop texting me so much at work. He lay down next to me and he rubbed my tears into my cheeks. He farted under the covers and explained to me what a Dutch oven was. He kissed my cheek and laid his head on my shoulder. I’ll pick you if you guys get divorced. I told him we weren’t getting divorced. He nodded at me and hugged my shoulder and he never said anything about it again. She hasn’t even held my hand since.

Brian will be fine. Burns are only second degree. Some ringing in his ears. Be home soon. Couch. I am not sleeping on the couch. I go to our bedroom and I grab my favourite pillow. She put it on her side. Again. I start for the guest room but I stop at our latest family picture in the hall. The girls are hugging her legs. Brian’s on my side, on the outside. His polo shirt is too big for his frame and the open buttons reveal too much of his chest. I sit on my side of the bed that we’ve never slept in together. When he inevitably finds me in here tonight, I plan on asking him if he was telling the truth last year, the last time we were both in this room. I hope she doesn’t hear. 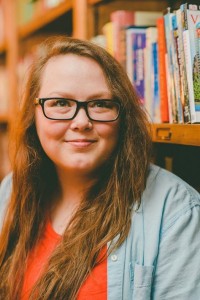 Meaghan Loraas is a queer writer living in northern Idaho. She’s currently finishing her undergraduate degree after a decade of dropping out, dropping in, and moving across the country. She enjoys drinking iced coffee and craft beers with her friends and watching Parks and Rec with her dachshund-terrier mix, Harriett. Follow her on Twitter: @meaghanloraas