on the nipple of the city we watch clouds life off mountains
slow motion bedsheet lovers barely breathing
as the lips of night close
the Henry Moore gleams
cold and bronze
pelvic bone maze
we enter, lose one
another in
magenta murmuring we
throb, sense each other
rapping knuckles on
hollow casting
it sings out desire
back
and forth
pulsating pounding
mons, mouths meet on
the “Knife Edge”
exiles’ embrace/the knife
glistening in our face

It’s my nipples I miss most. But I’m getting ahead of the story, this poem was written in 1982. Setting: the Queen Elizabeth Park high above downtown Vancouver with the blue-green-grey of Costal Mountains behind (The Lions twin peaks rising above) while my logan-berry-sized nipples were erect with lesbian desire.

we are open circle
word without end
a well-come
break down in communication
breg-, suffrage + down, from the hill

over the hill
we are the split subject
split, slit, slot,
hollow between the breasts
no longer divided against our/selves
are the subject of two mouths
which now face, form
words of their own
prefix and suffix in dialogue
no longer waiting to be heard
no longer eating our hearts out

my word!
eating pussy
cat got my tongue
we make love in the company of four

To be found in that intoxicating intimacy between the breasts, to disrobe male-defined language aggressively, arrogantly, ardently; to be together as two women writers on the loose.

A-dam does not know this
cannot tell this hystery
He shares the body as guest, hospes, stranger
Is not host is afraid of host of being held (host)age
A-dam creating an ecto-Genesis
ectogenous, able to live and develop outside a host

He writes with penis, pes-, pencil
Eve (w)rites with nipples, nadja-, nib
Not opposite but different
Speaks both side of Her brain

The necessity. To go back to how it all started — the genesis. Recognize a fecund parallel image source.

The astonishing volume of an infant’s crying: so small; so loud!

Decades pass by us before we occupy that total-body-outcry again. This time, however, it is: “Oh, yes!” “Oooh yes!”  “OH YES!!” OOOOOOOOoooooo…..

the reader grows up
is interested in other options

Duality. Unlike other gender-specific anatomy, breasts are apparent, obvious, hard to conceal. The duality of our twin breasts insures that our offspring are fed, kept alive. The danger: reductive thinking. Duality = sameness. Or conversely, that duality inherently signals opposition, antagonism.

A third woman in the waiting room is called back in for yet another worrying round of x-rays.

Here we sit, strangers suddenly on the edge of believing whether we are living or dying. We witness one another’s outcomes with growing fear & dissociation.

There is no intimacy in this room.

There is no small talk.

There is only the desire to get out unscathed. I begin to meditate for the other women. The fourth is called into her stall; is spoken to in hushed tones; the little I hear does not sound good. Finally my name is called out; the technician tell me to go immediately over to see my breast specialist and surgeon; she sends all my x-rays with me.

There are reasons why our breasts put us at risk but those reasons are denied for they are too profitable. Let’s consider the etymology of, and definitions for, the word “boobs.”

Booby hatch. 2. Slang. An asylum or hospital for the insane.

Booby prize.  An insignificant or comical award given to the person who receives the lowest score.

Booby trap. A concealed or camouflaged device designed to be triggered by some unsuspecting action of the intended victim.

The diagnosis. The decision. I had a young son. Later, what had seemed so foreign  surprised me with its familiarity.

what we call perception
is mostly habit

— then the body recognizes itself —

this is me
before
i had breasts

Post bilateral mastectomy and treatments, others’ expectations. For prostheses. That Oscar.

Absurdity of
: bra-binding if you have them,
camouflage if you don’t.

Others’ expectations (act as if it’s not happening), unacknowledged terror (this will never happen to me), innuendoes of causation (it won’t, and “If you had been a vegan you wouldn’t have breast cancer”), were the hardest part.

Odds of survival. Her body insisting upon.

Oscar: disengaging from societal preoccupation with.

Over which the bra still reigns.

Insatiable greed for
: the spilling out.
Hands on.
Mouth acquiring.
Breasts enlisted.

The meaning of “Mine.”

How profound truths are reduced and dismissed with clichés.

How our obsession with breasts is an impossible yearning.

Taboo: to acknowledge our grief for the loss of that body. That body we were once so embodied in, erotically embraced by with no effort on our part.

The gravity (as in force, as in seriousness) of the situation.

As I aged, my breasts began sagging and my large ribcage made this uncomfortable. But, my nipples? They were remarkable! After the surgery, I dedicated their exuberance to the similarly shaped twin peaks known as The Lions above West Vancouver. When the miners and loggers arrived in Vancouver in the mid 1800s, they called the twin peaks Bethsheba’s Paps.

I am comfortable with my body; enjoy its streamlined litheness. How others react, however, is uncertain.

Although Penny’s and Margaret’s lives are more conventional than Oscar’s, neither is traditional. On the third morning, as Oscar came down the stairs for breakfast, Margaret determinedly stepped out from the study and stood at the landing: “What happened? I’ve just finished reading Bloodroot and you didn’t say what happened after you went back for more tests about your breast.”

Time stalls above them with no place to alight.

Oscar’s been debating how to tell them but suddenly there’s no more debating. It’s now.

Instinctively, she takes Margaret’s hands in hers and places them firmly where her breasts used to be.

Then replies with conviction. “I’ve already thought about it. If I ever have breast cancer, I’m going to do the same thing.”

Then. They erupt. Into laughter about the bizarre exchange they’ve just had.

In order of their appearance. 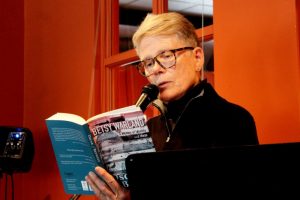 Betsy Warland has 12 books of poetry, creative nonfiction, and lyric prose. Her collection of essays on writing, Breathing the Page—Reading the Act of Writing (2010), is a bestseller. In 2013, Warland created an interactive salon on her website that features excerpts from Oscar of Between–A Memoir of Identity and Ideas, Guest Writers and Artist’s work, and Featured Readers. Oscar of Between—A Memoir of Identity and Ideas was published by Caitlin Press’s new imprint Dagger Editions in 2016. Reviews of Oscar of Between in the U.S., Germany, Iceland, and Canada have called it “a roman à clef,” “truly luminous,” and a “tour de force.” Director of and mentor in the six-month international Vancouver Manuscript Intensive program, she will be the Lyric Prose and Poetry Mentor for The Writer’s Studio in 2017.