The motorcycle jacket my mom brought home from Denmark,
small enough for my niece now. Around the house mostly, never to school.
Cindy and me punching each other on the hide—against our fists, the sound thick—
and smoking too, in the backs of buildings            turning suburbs to cities.
The summer time            filling a ball cap with water in the fountain, and tipping it over
our heads by the tennis courts. Baseball. Alone in the field, hitting
as far as I could and then chasing the ball, out, way out, farther than I could hit now
over and over—
whatever it was is still there
when I jump off the dock
one leg higher than the other, one hand in the air,
the other on my nose. 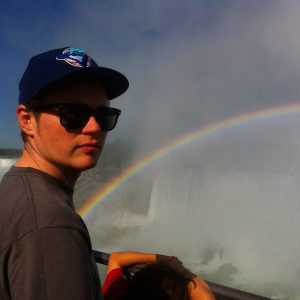 Nolan Natasha Pike is a writer, comedian, and multi-disciplinary artist living in Halifax, Nova Scotia. Nolan was shortlisted for the Atlantic Writing Competition in 2012 and the Geist Postcard Contest in 2013. His poetry will be published in the upcoming issue of Event magazine. Nolan’s literary work is comprised of poetry, fiction, and a critical theory practice examining metaphor as inherently queer language. He is currently working on the completion of his first novel and attempting to eat less Kraft Dinner, both of which are proving challenging.