This is a nonfiction story that deals with emotional abuse, and may resonate with readers on many different levels. If you or someone you know needs to safely reach out for help, we invite you to consult the Canadian Women’s Foundation list of support services, found here.

Having not yet had my first cup of coffee, I could be forgiven for making the mistake. He was slender, wearing a pea coat against the chill of Edmonton’s early March, his brown hair vertically arranged. He looked like he was sending a text. My heart stopped. I wanted to walk away, but I couldn’t. I held my breath. I thought he might not be able to hear me if I did.

He turned. His face was wrong. Brown eyes, not blue. Clean-shaven. A harmless stranger stood before me on the platform. As the train pulled in, I let my breath out. My hands shook. I almost tripped on the gap between the concrete station and the LRT car.

It wasn’t that he’d been violent, but after cutting off contact with him, the city terrified me. He lived only six blocks away. We took the same buses, the same train, walked the same streets to the university campus. I vaguely knew his schedule from when we’d dated, and I planned my days to avoid him.

If you’d asked me what I was so afraid of, I wouldn’t have had an answer. It wasn’t like running into other exes, the discomfort of awkward small talk, wondering if you looked cute enough to prove you were better off without them. Those moments when I saw someone who barely resembled him brought me out of my body. More than once, walking through halls I knew he frequented at school, I’d miss entire conversations with friends, looking over my shoulder.

At first, when everything shut down, I was relieved. I knew I wouldn’t have to be terrified of leaving my house. If I were lucky, he’d leave town, move back in with his parents. Thousands of kilometres away, a brief look at his face couldn’t bring back the accusations he’d hurled at me for months, years, even, over the course of our friendship and eventual relationship: Unreasonable. Not smart enough. Not sexy enough. Crazy. Too emotional.

“I knew you would react this way,” he’d recite, like clockwork, whenever I got upset. Suddenly, my emotions became a predictable personality flaw, a fault he’d grown accustomed to in his ever-pitiable work of managing my high-maintenance self. “You knew what you were getting into.” When he listed mutual friends he wished he could sleep with, I laughed. I wanted to be a cool partner. I wanted to be a good woman, one who didn’t get angry when he compared me to others, one who conveniently forgot how he laughed about how drunk I got at that party, at how easy it would’ve been to take me home, and, in his words, “have sex with me.”

Locked up at home, I made myself remember. I made myself process these things, finally free of the accusation I most feared, from him and our mutual friends, from the world: crazy. The worst thing a woman could be. But the days turned into weeks, the weeks into months. The world around me began to feel frighteningly familiar.

Do you feel like you have to do everything exactly right, or something terrible will happen? You keep waiting for the penny to drop, for the wild, incalculable luck of his attention to disappear. This ill-timed joke, this one trip to the grocery store for milk and eggs and flour (God, please, let there be flour) could be the one that destroys everything. You’re always holding your breath. You’ve been holding it for so long that it’s almost more painful to let it out.

You have no control over your body, your desires, your needs. When you smoke at a party, when you cheat at your casual vegetarianism at your parents’ Thanksgiving dinner, he tells you how you’ve become less attractive to him, how he’s lost respect for you. He says this is because he’s worried about you. He wants to keep you healthy. And you believe him. You laugh, and you aren’t afraid, or, if you are, you laugh about that too, because only a crazy woman would be angry that her partner said those things. You look at your future and can’t imagine it. Around you, everything is nebulous, changing. You don’t know what tomorrow will look like, let alone next month, next year. You can’t plan anything. Everything is contingent.

You’re isolated from your friends, your family, the people who love you. He says your male friends want to sleep with you, asks if he should be worried. He reminds you that nobody else understands you, appreciates you like he does, and you believe him. You are thrilled to be receiving the best possible love that you can, the only version of love that you deserve.

The days start to blur together. There are whole weeks you can barely remember. As your hair grows longer and you increasingly subsist on a diet of popcorn and beer, your body shifts under your skin, expanding and then shrinking again, the skin stretching to accommodate you. The person in the mirror is someone you don’t recognize, someone you no longer like. And yet you spend all your time with her, alone, forced to be with yourself.

Sometimes, though, the memories you’ve let slip away, whether in self-defense or out of sheer exhaustion, come rushing back with a force that knocks you off your feet. You’re sitting on your best friend’s couch, half-drunk on eight-dollar wine after a play you left at intermission, less than a month before the world would end, when you remember another time you could barely walk, another time you were being taken care of by someone you trusted.

You have never told anyone this.

It was after midnight. You were nervous about the party. All you wanted was for his friends to like you, to respect you. You were not outgoing like him, interesting like him, charming like him, smart like him. You lost track of how much you drank. For a long time, you sat on the couch, half-prone, unsure where you were. He was downstairs somewhere. Above you, the dim light of the rental home’s living room swam. You were happy. You were warm. He tugged on your arm. “I think it’s time to go.”

You walked through the trees. He brought you a bagel. He took you upstairs. He left you at the door.

It was only later that he made the joke, trying to tell you how often he’d fantasized about you before he finally caved and admitted he was attracted to you. He laughed as he said, “It would have been so easy.”

When you remember he has your address, you no longer feel safer at home. 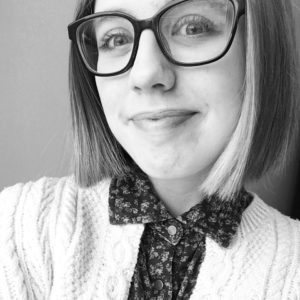 Katherine DeCoste is a queer settler and writer in amiskwaciwaskhikan, where they recently completed their BA Combined Honours in English and History. Their poetry has appeared in Grain, Glass Buffalo, and elsewhere, and their first play, red wood, was produced at the University of Alberta in 2019. In 2019/2020, they were a member of the Citadel Theatre Young Playwriting Company. In September 2020, they will begin their MA in English at the University of Victoria.