When I say poetry saved my life I should mention
other forces–
by 1999 all the cars cruising the kiddie stroll had power
lock doors, crystal meth turned the girls

My mother lived beside herself in fear
I was going to die, one day leave
the house and never come back,
dragged from the walkway beside
the side-by-side duplexes where
Hermitage Drive folds into Argentia
to the blackberry-bush-overrun tracks
west of Railway and Williams. I was born
during the hot and sticky summer of ’91
and at six years old I told my parents our
house was a prison: I was going to move
out soon and get the cat I always wanted.
When I say poetry saved my life I should mention

I was raised on the sounds of suburbia:
high pitched drone of Saturday morning
lawn mower engines cutting through
stucco, screen door sliding in tracks,
footrest creaking into motion,
murmurs from behind a closed door:
Larry King Live on CNN,
Gettysburg reenactments with the same
persistent channel 44 Ashoken Farewell
longbow violin background track, obsessive
rewinding of Pretty Woman VHS to the pancake
error scene, Dances with Wolves on repeat,
and yes, there were other forces–

Smells: Herbal Essence shampoo, brewed
Hazelnut flavoured coffee, freshly sprayed
Febreze and chocolate chip banana bread
baking in the oven, taste: middle-class, white;
touch, the way everything has the same sort
of texture; sense, the way you know something
is wrong before anything happens. I was told
there was no God but I knew what to do in case
of fire, the steps following loss of a guardian.
Still, the real problems are child pornography
and no-collar crime, self-locking illusions of safety,
youth protected from everything and yet nothing–
By 1999 all the cars cruising the kiddie stroll had power.

My father always said if there was a gun
try to scream, hope someone would hear
because they don’t shoot until you’re out
of the city but almost always do other things
to you first. There is really nothing you can
do except change yourself; there is no control,
only influence. Institutionalized paranoia:
fence in the house, don’t dress like a slut,
lock doors, crystal meth turned the girls. 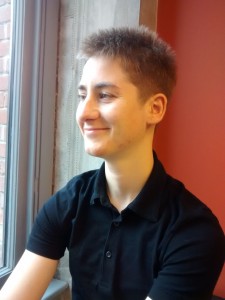 Jade McGregor graduated from the University of British Columbia with a Bachelor of Fine Arts in creative writing and psychology. Her work has appeared in Fugue Magazine, The Outrider Review and Spacecraft Press. Born and raised in Steveston, Richmond, Jade now lives and learns in Vancouver, BC.