Serendipitous Corruptions and Erroneous Ghosts in the Culture Queer Sea: An Amble through jam ismail’s Work 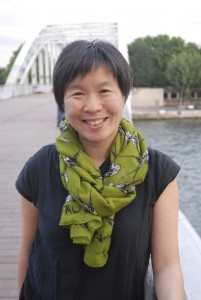 The most important writers in my life didn’t just teach me about writing, they also showed me how to live and how to engage with community. They showed me how the practice of writing is continuous with the practice living. And because community connection is important to me, it’s hard to name just one writer– I’m most taken by the people who could make conversations happen and could shift our ways of living, feeling, thinking and being. I could name Lee Maracle, SKY Lee, Roy Miki, Fred Wah, Jim Wong-Chu, Daphne Marlatt, Betsy Warland and many others. But today, I’d like to hold up jam ismail, partially because she is remembered less than others, but partially because her writing, thinking and way of being struck me so profoundly when I was young, and continues to resonate with me now, in these messy neoliberal, fame-obsessed, earth-destroying times. These are also times of human mobility and immobility, in which capacity for movement in profoundly connected to economic and historical conditions, though in complex, situation-specific ways.

hah? bosan crossing georgia street said, to the driver
who’d muttered something.
the light turned amber.
he stuck his head out the window, yelled:            hey, ricie!
grinned, & zoomed off.
bosan cracked up:     ricie! it’s pretty funny!
sum wan said: hey, you just got insulted.
ginger smiled:        we’ve always had to tell bosan how
oppressed she is.

I first met jam when she was hanging out with Lee Maracle, SKY Lee, Daphne Marlatt, Betsy Warland and others. These women are my foremothers; I was in awe of them. Some of them identified as lesbian or queer. I think all of them identified as feminist. I know they were in conversation with one another, though as a younger generation person, I wasn’t present in those conversations in the ways they were with each other. No doubt they will describe their conversations and connections to one another differently than I would. The Telling It Collective was key to their work together. The collective held a conference in 1988 to address questions of women’s writing community. I had a few lucky friends who attended– my generation was just finding its throats, ears and feet in the 1980s.

photosynthesis    in plants must be imagination in humans. what ar stories,
for plants?    we call them stores. what is narrativ ,    chemically speaking-
?   tran s port.

I met jam slightly later, maybe through SKY Lee or maybe my friend Lily Shinde, a founding member of Asian Lesbians of Vancouver, and a survivor of wartime incarceration. These histories are continuous. I identified with jam, because of her Hong Kong British accent, her spectacles, her unapologetic intellectualism. She is the same generation as my mother and knew the girls’ school, Bellilios, that my mother attended in Hong Kong. This mattered to me because I had grown up in relative isolation from other Chinese people, in St. John’s, Newfoundland. The connections I was making to Chinese Canadians in Vancouver in those years were precious to me, though most of the CBCs I met then were lo wah kiu descendents, belonging to a different, earlier wave of immigration–one that I profoundly respect, and that I inherit as a kind of social wealth and as a responsibility. But it is not the one that my family comes from. jam’s is, though my background is Cantonese and Hakka, while hers is Cantonese and South Asian Muslim. I recognized something familiar and familial in her immediately. It was a kind of relief to meet a progressively minded, intellectual lesbian from Hong Kong, who liked me, was interested in me, and supported my burgeoning desire to write.

about serendipity.  oxford & brittanica hav it sarandib, a former name of
ceylon ( now sri lanka), is an arabic ‘corruption’ of the sanskrit simhaladvipa
(dwelling-place-of-lions island); & that an englishman hitched –ity onto seredip
to make serendiptiy.   well, that’s one way to do it.   english a word by romanizing
an arabesque of sanskrit & grafting on a latin tail.  it’s a tail that wags the dog, for
latin sends on its imperializing ways.   but a colonizing onomatopoeia (ceylon
became a crown colony in 1802) needn’t be an onomatopooper.   one could learn
by it to resuffix the paris-ian with an –ite, or decline ‘british’ to ‘brutish.  me, i like,
e.s.l. trips, such as ‘united sates’.

from the DICTION AIR

I knew jam’s writing from the anthology Many-Mouthed Birds, and I knew that there were printing errors that upset her. She plays with spellings and misspellings, standard and non-standard Englishes, family language, hybrid language and puns. An editor or copy-editor of Many-Mouthed Birds had “corrected” her spelling, in the header of her piece “from Scared Texts”, converting “Scared” to “Sacred.” But of course, she was playing with the idea of sacred texts–her “scared texts” in a sense actively queered and racialized the language itself by pushing readers to see the short linguistic distance from “sacred” to “scared,” how easily one can become the other. At a location in which a certain Orientalism infiltrates much West Coast spiritual practice, we odd Asian bods are always a little scared of how we might get misread next.  In “from Scared Texts,” jam was playing, but the colonial schoolteacher in us all had come to correct her raced and gendered specificity to make it conform to the straight/Anglo norm.

While this was a bad experience for jam, it was a good experience for twenty-something me, because it taught me in very concrete terms how to read her work. In the copy-editor’s teacherly error, I recognized what jam was doing, and how one could take standard English and turn it to the way it is practiced and played with language across a broad range of geographic, cultural, political and familial locations. Shortly after this, jam published The Jamelie/Jamila Project with the Lebanese Canadian visual artist Jamelie Hassan. This was an another important moment because their collaboration showed me how it is possible to make art and/or writing with another, across the gulfs of both difference and sameness. Further, Jamelie Hassan was in her own right an important mentor for me, helping me make sense of how to handle a very rough moment in my twenties when I was attacked by a group of progressive racialized women for something they perceived me to have done, which I had not. It was very difficult to find language to respond to that complicated situation. Jamelie showed me how storytelling might be a way. In those days, Jamelie was interested in relationship and human continuities. She was particularly interested in the relationships and continuities between the Arab world and the Chinese world, particularly as they pertain to knowledge practice. Her conversation with jam ismail–through poetry, text and visual art–taught me about the deep and nuanced ways that relationships can be built through a recalling and a remaking of past relationships and through linguistic and visual play. Together they did the work of connecting the Chinese and Arab worlds in ways that I still hold, and still apply to my present interest in relations across a broad range of cultural, racial, and aesthetic differences.

‘don’t think so much
about right and wrong,
it’s more a matter of
how to reach someone’

The three of them were jumping all over the room hurling their bodies around the way some children
do just before supper.

They didn’t. “Look,” I say, “I’m here to keep an eye on you. But I’m not like your mummy and daddy. If you hurt yourself I don’t know what to do to make it feel better till the doctor comes.

Children can take care when they know adults can’t. Ali switched on the T.V. Nur took up a toy. Sami followed me into the kitchen and watched me jab the microwave. Then, “Jam”, he said, “are you a girl, a mummy, or a Japanese?”

That’s more to pick from than I’m used to, but I wasn’t in the mood. “What do you think?”,
I scowled.

I was still smiling a little (chagrin) at how I’d been outsmarted in this old test, when he slid in again and asked,   “Do you have a johnny?”

He laughed, and fluke, I seized momentum, “And when did you change your name, Sami?”, I asked.

He laughed and laughed, happy that I’d come out to play. Then he made me pronounce the real, personal, names of other sexes we knew, including Mummy-wummy and Daddy-waddy.

On Planet Earth, five billion human genetalia stirred, unwilling to take on the headache of namehood.

Prime Ministers moan: “How are we going to handle this, Michael!”

Larissa Lai is the author of two novels, When Fox Is a Thousand and Salt Fish Girl; two books of poetry, sybil unrest (with Rita Wong) and Automaton Biographies; a chapbook, Eggs in the Basement; and, most recently, a critical book, Slanting I, Imagining We: Asian Canadian Literary Production in the 1980s and 1990s. She directs The Insurgent Architects’ House for Creative Writing at the University of Calgary.‎