Sassafras Lowrey’s most recent novel, Lost Boi, was released a few months ago with Arsenal Pulp Press, and it has already gone into a second printing. Lowrey has even been recognized on the streets of Brooklyn, where they live, by fans of the book, which takes the fairy tale of Peter Pan and spins the story in such a way that we see the text and characters in another light. I had the pleasure of talking with Lowrey about the Lost Boi book tour, writing and re-writing, watching Peter Pan on VHS, and who would play who if Lost Boi was ever made into a movie. Needless to say, Sassafras Lowrey has a lot of interesting things to say, and offers up some good writing advice as well! 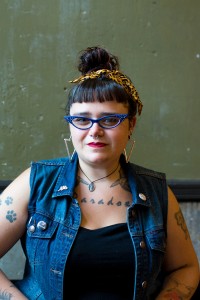 Where were you when you got the news that Lost Boi had gone into its second printing? Did you do anything to celebrate?

Yes! I’m so thrilled that Lost Boi has gone into a second printing just three months after it released! To be honest it’s  actually kind of unreal, definitely not something I expected would happen.

I got an email from Arsenal Pulp Press with the news on my phone and I might have done an awkward happy dance right on a Manhattan sidewalk. My partner who is amazingly supportive took me out to dinner the night I found out to celebrate.

Where did you get the idea for the novel, Lost Boi? How long did it take you to complete it?

I’ve always been fascinated with fairy tales and other classic children’s stories and especially Peter Pan. J.M. Barrie’s original story is so dark it just lent itself to being queered. Once I had the initial idea the story just came to me and I knew I needed to write it. It took me about a year to actually write Lost Boi, and the first few months of the year  were spent outlining. It was a shockingly fast writing and publishing process. From the time that I started writing Lost Boi to when it was out on the shelves was about two and a half years.

What drew you to the story of Peter Pan? Did a particular book, or books, help you see and build the world depicted in Lost Boi?

I’ve always been fascinated with the story of Peter Pan, when I was a little kid I had a VHS tape of Mary Martin in a stage production of Peter Pan. I watched that movie over and over again until I wore out that VHS tape. How could a closeted elementary school kid not be obsessed with a middle aged woman playing the part of a boy who would never grow up!

I didn’t really draw on any books other than J.M. Barrie’s original Peter Pan while I was writing Lost Boi, though I did spend a lot of time thinking about queer punk communities that I had been part of, or had seen. I drew heavily on that for building Neverland and the rest of the world the lost bois would call home.

Before you started writing Lost Boi, what were you working on? Did you work consistently on the story, or did you find yourself going back and forth between projects?

Before Lost Boi I had been working somewhat simultaneously on my first novel, Roving Pack, and on editing a kink anthology titled Leather Ever After, with the occasional anthology submission and magazine column thrown in. Most of my writing tends to be pretty book focused, and once I set my mind to completing a particular book I tend to stay focused on seeing that project through. I fell in love with the Lost Boi characters hard and fast so we spent a lot of quality time together getting this story down onto the page. I like to keep really busy though, so while I was working on editing Lost Boi I was also co-curating the Queer Book Diorama Show with Hugh Ryan, which meant wrangling artists and writers from around the world for a queer literary gallery show at the New York Public Library.

What’s on the burner for Sassafras right now, in terms of writing? I read on Facebook you were working on a new novel. Could you give our readers a little insight into what your next project may be?

I intentionally took some time off from big writing projects once we I finished editing Lost Boi. There is a lot of pressure on queer authors (and authors in general) to constantly be producing new work. I really wanted to let myself have the opportunity to enjoy the release of Lost Boi, without the distraction of looking ahead for what comes next. Focusing on enjoying Lost Boi’s release was a great choice for me, and I came back to writing inspired, and energized to create something new. In the past month or so I’ve started working on a new novel. iI’s still very much in the early stages of outlining, and I’m working on getting to know the characters. I’m not ready to give too much away yet, but the story is still going to be queer although I think it might be branching off in a bit of a new direction, and will be aimed at YA audiences.

With Lost Boi I was interested in retelling Peter Pan but switching it up and so something that felt really important right from the beginning was not to tell the story from Pan’s point of view or even from the point of view of Mommy Wendi. For me, the most captivating part of the Peter Pan story is the lost bois. I’ve always wanted to know more about them, where they came from, and what drove them to build a home with Pan and then walk away from it. When I started writing Lost Boi it just made sense to me that it would be told from the perspective of one of the bois.

I don’t want to give the ending away, but it was a good one. Had you tried out any other endings, or had the ending you had in mind changed over the course of your writing?

Thank you! I’m so glad you liked the ending. There were a few details about that scene that I played around with early in the writing process, but I felt pretty certain there was a specific way I wanted the story to wrap up. Most of the editing work I did was about ensuring that I captured the intensity of the moment for characters, and making sure the scene had just the right combination of hope and heartbreak.

What would you say to writers who are sending their work out, some for the first time, about rejections? Have you received rejections? How do you handle them?

The first thing I would say is Congratulations! Overcoming the fear of sending out writing for the first time is a huge accomplishment. Then, best advice I can give is to keep doing it! Send out work to as many places as you can. I’m a big believer in the more places you send your work, the more likely some of it is to find a published home.

When I get rejections, I let myself be sad or disappointed if it was something I really wanted. Mostly I really try to remember that a rejection doesn’t mean that I’m a bad writer, it just means that particular story wasn’t a good fit for where I submitted it. I’ve edited anthologies and so have been on both sides of the table. As an editor I’ve had to reject lots of writing that I really liked, but just wasn’t a good fit for what I needed in the particular project. Ultimately not everyone will connect with what you write, but by sending lots of work out into the world you really increase your odds of finding the folks who will appreciate your work!

You have spent a lot of time on the road, reading with other celebrated queer writers. What were some of the memorable moments from the road? 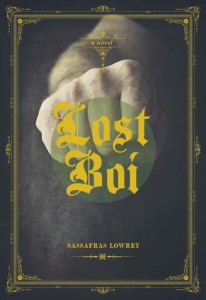 It’s been so exciting to be able to do so much touring with Lost Boi! I was all up and down the West Coast in the spring and then up to Toronto. It’s been amazing to have the opportunity to be on tour and read with amazing queer writers like Amber Dawn in Vancouver and Toronto and Michelle Tea in San Francisco. Definitely though the biggest highlight for me was getting the chance to meet so many incredible queer readers who have connected with the book and have come out to the readings! My passion for writing comes from wanting to create books where queer and leather readers can see themselves, and their worlds reflected on the page–knowing someone connected to my book enough to come talk to me at a reading is such a tremendous honor.

Are you strictly a fiction writer? I read a poem of yours once–is poetry something that you are also writing?

It’s funny just a few years ago I wouldn’t have considered myself a fiction writer at all! I didn’t think I had it in me, but that’s something that has really shifted over the past six years or so and now I would say I’m primarily a fiction writer, though not exclusively so. I’ve done a lot of personal memoir style writing both with my first book the Kicked Out anthology and short pieces in a number of anthologies. I’ve dabbled in a number of forms–poetry is one that I don’t often feel comfortable with but have played in.

When I was reading Lost Boi, I was trying to envision it as a movie. It could be a movie! If it was turned into a movie, who would be your dream cast? Who would play Mommi Wendy, for instance?

Oh goodness I would love to see Lost Boi the movie!!!! Hmmmm, dream cast, that’s a hard question! I’m not sure who I would want to play Mommy Wendi. It would have to be someone who looks very young and who would also be able to capture the transformation that character goes through. I would love to see Lynnee Breedlove of Tribe 8 and author of Godspeed play the character of Pan.

When was the first time you realized that you wanted to be a writer? What ignited your love of writing?

I discovered a love of writing first through zines when I was seventeen. Prior to that, I wrote when I was given an assignment for school, but it wasn’t a way I felt very comfortable expressing myself. I had diagnosed learning disabilities as a kid and was (still am) a horrible speller, and punctuation eluded me. All of this made writing a source of anxiety instead of comfort. I also became homeless, partly because of my first journalling attempts being discovered and outing me which made me distrustful of writing. All of that changed when I discovered zines and more specifically queer zine culture. Suddenly, I found people who were writing about abuse, survival, love, and building a family and community with other runaway/throwaway queer kids. I like to say that I’m a zinester-educated writer!