My masculinity is red and hot, excited and vibrant—a body that’s been too long ignored. An acutely sensitive organ of denial. My masculinity is tight and wants to loosen. I can feel the tension of repression against it. I can feel myself opening to my man. My voice lowering; my stance solidifying. Words that have been silent, crushed, inkblots are forming into expression that can be shared and even celebrated. My masculinity is penis and heart. Gut and mind. Arm, leg, and love. My masculinity is calm and strong. Is dramatic and dances. Does not want to quash femininity, but rediscover it through beard and bicep. My masculinity acknowledges the responsibility. Of cock and balls and testosterone. Of sensitive man. Beautiful man. Poet man. Man who loves man clothes. Bowties. Man who hugs. Lifts weights. Prances, preens. Drinks beer. Cocktails. Finally drinks cocktails because he is guy and can do it his way. Man who treats his girlfriend or boyfriend nice. Who loves his man voice. Sings to hear it resonate. This deepening man. Man who is called he. Who swims oceans. Cool, transmasculine, blue. 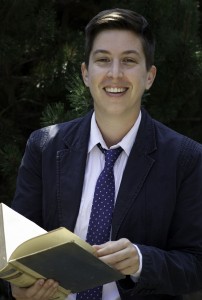 Julian Paquette has published his writing in magazines and journals across Canada and the US. He has also published two chapbooks of poetry, A Theory of Darkness (the unkindness of ravens press, 2010) and The Burden of a Song (Mercutio Press, 2007), and was also published in Ian Cant’s book Papercut Heart (conundrum press, 2009). Julian earned an MA in English and creative writing from Concordia University. He has taught college-level communications and writing courses, and has also worked in a number of communication-related jobs. Julian now lives on Salt Spring Island, BC, where he is at work on a collection of poems called I Went Walking.