Please note: The following excerpts do not appear consecutively in the novel.

[mks_dropcap style=”letter” size=”52″ bg_color=”#ffffff” txt_color=”#000000″]W[/mks_dropcap]
ith the exception of absentees—partiers laid up by the 24hour flu and boys who’d decided that a paper diploma meant less than legit offers for mill shifts—nervous excitement rippled across 176 Grade 11 bodies for two mornings starting on a Monday in mid-October. On the first, the Principal granted boys freedom from classes in order to take a test, a diversion “not mandatory but highly recommended.” Girls made their way to one of three assigned rooms on the next. Knock, knock: the future had just dropped by.

In polar opposition to easygoing stretches of nobody pressing much about an adulthood that would assuredly unfold as expected, vague promises that “the world is your oyster” as though that meant something useful, and the occasional practical-minded pointer to stop dreaming and start grabbing a clue, the blue van of city-dwelling representatives of Science and Mathematics arrived to classrooms of fretful whispers to cooly determine students’ likeliest slots via exactly one authoritative multiple choice test, the cryptic weapon of their trade.

Once computed, their tests—a few white pages of pencilled in ovals, a meaningless pattern to the naked eye—contained powers of clairvoyance any fortune teller would kill for. Pacing up and down aisles the suited men intoned “Don’t worry, there are no wrong answers” to a corps of frowns and newly skunky pits.

Assigned to adjacent rooms the year before, Gordyn and Jay had filled in the tiny ovals as instructed (carefully, with the stubby 4B pencil provided). They compared notes right after, their joshing around peppered with dismissive as ifs.

When the results arrived three weeks later with a page of small print explanations, the Principal had set aside a spare class to ponder future career choices selected by the machine, which students pictured as blinking and churning as its huge body took up an entire room in one of those futuristic office buildings with mirrored windows at the city’s core.

“Aptitude is not destiny,” Mr. S had assured his milling wards from the second step of the bleachers, “but it does imply that you’ll be far better suited for some sectors than others.” “Like a rabbit is suited to carrots,” he added.

Accompanied with theatrical glances toward the gym’s high bank of windows, as though the actual future sat right there on the horizon, the earnest speech featured heavy phrases—“a time of important decisions,” “careful consideration,” and “discuss such matters with your parents.”

The man emphasized relative freedom of choice: if the meeting had been taking place in another country, a miserable, drab-uniformed one just a stone’s throw from Big Brother—an East Germany, a Soviet Union, a China—all of this would have been decided, iron-clad and no ifs, ands, or buts, by the final year of elementary school. Without a word of juvenile input. By their early years as teenagers luckless kids there were already sorted, no better than chicks at a hatchery. Well before their sweet sixteenth, in other words, their destiny as a specific cog in the machine of the state had been pinpointed; tests and computation mapped it down to the smallest detail. Soldier or plumber, calculations existed to tell them which. Signalling his finale, he hitched “Seriously, now, consider your luck” to a slow, thoughtful nod.

With a no-fuss pageboy that mixed uneasily with hair dyed platinum, perfectly neat and matching skirt and sweater combos in pink, yellow, or white, and year-round beige sandals, the girls’ councillor and the Principal’s right hand, Mrs. D’s frosted pink lips smiled widely with these morsels of news and wisdom. As far as choices went, she summarized, the lives of these unfortunates were as good as over, so count your blessings.

During the period’s leftover minutes, Gordyn had fixed on the ridiculous appearance of ditch digger and farm labourer, as though the career list had been compiled in medieval Europe; the only missing options were blacksmith, executioner, and court jester. He also poked holes in the stupid assumptions on the part of the machine’s makers (it being nothing but a massive pocket calculator, after all): possessing a strong mechanical aptitude, which his test scores had revealed, did not make the next logical step stopping by a garage or a mill to fill out an application form. Designing a pattern for a shirt and then smkewing it, or starring in and directing a home movie made equal demands on someone’s mechanical know-how. Arranging a flower bouquet used as much mechanical aptitude as that other popular career recommendation for boys, mortuary technician.

Jay had shoulder-checked Gordyn when he made cracks about “Clerical,” miles above Jay’s second-place aptitude, “Custodial.” Apparently, wrong answers were possible if his earnestness with oval filling had predicted that he’d wind up typing forms for decades or serving his boss coffee. Or humming brainlessly while using the floor polisher, scraping gum from desks, and scrubbing toilet bowls. He felt pangs of envy at Gordyn’s the-sky’s-the-limit scores, which showed him as possessing aptitude in practically everything. And Gordyn’s zingers about hiring Jay as his secretary and Jay’s future destiny as a welfare mom hadn’t helped either. 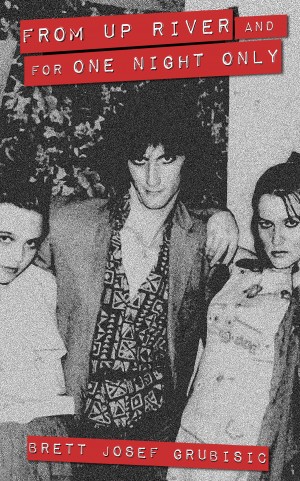 “Better a welfare mom than a … ” Jay raised his voice, “cornholer.” Sometimes Gordyn needed a public reminder of the limits of friendship.

Speeding through the door frame Jay slam-dunked the balled paper into the garbage can. The resounding thunk had satisfied him, the up yours, man noise a warning to anything, print outs included, crowding his path.

The identical process a year later encouraged a brief cascade of tears. Dee’s talents, according to her score, pushed her toward the domestic arts: housewife, florist, beautician.

Dry-eyed, Em threw her sheets directly into the trash can, convinced that she knew herself better than any machine ever could. She’d just skip telling her dad, who’d wait about a quarter of a second before the raised eyebrows of “I told you so.”

She’d rather slave away in the new fiberglass factory than pass her days poking at patient’s decaying teeth and saying “Open wider” from 9 to 5 until eternity.

The machine had practically sent all the girls pastel uniforms, free toothbrushes, and a lifetime supply of bibs. Ditto for sticking needles into arm crooks and taking dictation year after year from suit-and-tie executives in office towers. The girls councillor announced the top slots should be thought of as recommendations. And that being naturally skilled at something didn’t mean you’d enjoy doing it. She remarked that fishily the machine had determined that no girl had a natural talent for politics, car repair, or the entire field of law, except for stenography.

[mks_dropcap style=”letter” size=”52″ bg_color=”#ffffff” txt_color=”#000000″]I[/mks_dropcap]n the rumbling, tremor-prone weeks that followed the afternoon departure of Stepmom #1 and her bronze four-door, Joey moped in the city after work.

If talkative once home he’d say, “I stopped for a few.” He’d ask about dinner and hint that sitting at the dining room table while he ate would be a wise gesture toward the man who kept clothes on their backs.

Slamming the convertible’s door on other evenings, he’d kick off boots and woolen socks outside, and not bother to ask about or look for the covered plate in the oven. After changing into Blue, a ratty pet sweatshirt Jay and Em had rechristened Bad Mood, he mixed a Manhattan, parked on the recliner, and stonily clicked through channels. Now and then he’d drag his slippered feet from the rec room bar to the couch upstairs and listen to the Freddy Fender record with weepy songs about wasted days and teardrops falling while studying his matador painting. Handling these grizzly routines meant tiptoeing, stealthy transparency until called upon.

Jay had to agree with Em’s impatient assessment: “It’s not like he got dumped at the altar.” Some self-pity just looked pathetic, a toddler’s tantrum over its own mess.

On the Saturday morning that Em and then Jay peered down from the kitchen as a quarrel of hand gestures with the new neighbour about the man’s baffling unwillingness to mow the lawn as far as the common property line escalated into mutual shoving and two stunning punches to the slouch’s defeated and shocked face, Joey requested Jay’s help with assembling the garden shed. The boxed aluminum parts of the catalogue purchase currently waited at the foot of the driveway.

“The less said about that incident, the better,” he warned. “You can’t solve every problem with $2 words, Berm.” Joey’s little joke: book and worm squashed together into a nickname. One of several illustrations in the novel.

Still tearing open the cardboard they’d dragged into the back yard, Joey grumbled that the trouble had really started with her—Stepmom #1’s actual name stricken from the history books, verboten—D and C way back when. “A Dusting and Cleaning procedure, right,” he added for clarification while making a vague circular gesture in the crotch area. Jay uselessly searched his memories for a major blow up during a chore weekend. “I met that frozen bitch in Agony. What else is there to say?”

Jay guessed that whatever his opinions on the subject might be, Joey didn’t care for them. The conversation flowed one way only. Jay widened his eyes to convey deep interest. That trick worked equally well for teacher finger-shaking lectures and greyhair reminiscences.

Joey’s official line, “It was time to move on, kids,” contained a second part, for Jay’s benefit only, that hinged on guy-to-guy universal truths—“frigid as a nun” and “a man has needs”—that rendered a fuller explanation pointless and the question of duty or vows or responsibility closed. He let it slip as well that wife #2 had moved to Los Angeles with a short-lived dream of becoming an actress, only to wind up “being an escort that called herself a model.” He’d known about this wrong turn when he married her, and felt, as a result, that she should have cut him some slack with Lorraine, she of the married-but-willing wandering hand and foolish husband who thought a gold and half-carat trinket could tame the vixen’s wild side.

At “Fucking settlement got rid of her for good, let’s hope,” Jay wondered about the eventual target for the pent-up rabidity. Other than the obvious, maybe he’d punch a tree trunk, break rocks with a sledge hammer.

Bored and listening to “You hold ‘er, I’ll screw ‘er” for the umteenth time as he positioned a dismal fraction of the shed’s exhausting supply of bolts, nuts, and screws in front of his father’s tool-clasping hand, Jay couldn’t wait to tell Em the LA business. When Joey brightened and moved on to a survey of better news— that the shitbox Volaré of Stepmom #1 no longer dripped oil all over the driveway and her ridiculous hairspray bills had come to an end—Jay scarcely listened.

Calculating the hours needed for the shed’s assembly felt harder than those baffling Arithmetic questions about same-track trains and varying speeds and looming collisions. He could bring a practical example to class—

Father A is badmouthing Ex-Wife 1 at a rate of 3 insults per minute.

Each panel requires 6 screws that take Father A 7 minutes to properly insert.

How many insults will Son B hear before he is free to tell Sister C about Ex-Wife 1’s former occupation?

From Up River and for One Night Only comes out this April from Now or Never Publishing. 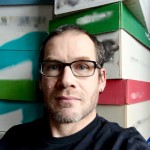 Brett Josef Grubisic is the author of the novel The Location of Unknown Possibilities (Now or Never Publishing). His first novel, The Age of Cities (Arsenal Pulp Press), was a finalist for the City of Vancouver Book Prize. He’s the author of Understanding Beryl Bainbridge, co-editor of National Plots: Historical Fiction and Changing Ideas of Canada, and curator of the Plenitude series, The Query Project. He lives in Vancouver and teaches at the University of British Columbia.