If you’ve ever taken a Canadian Literature class, or perhaps simply a literature class in Canada, then you’ve probably heard of Sinclair Ross. Maybe you’re like me, and had your introduction through his short story, “A Field of Wheat,” published in the Queen’s Quarterly in 1935. Or you’ve read CanLit parodies pointedly roasting Ross through the unyielding references to the harsh prairie climate.

What you may have learned about Sinclair Ross . . .

Sinclair Ross was born on a homestead near Shelbrooke in northern Saskatchewan in 1908. He dropped out of school after grade eleven to work in a bank. After working in many small-town bankds in Saskatchewan, he transferred to a bank in Winnipeg in 1933. In 1941 he puiblished his first novel, As for Me and My House. This prairie is the major setting for his two collections of short fiction, The Lamp at Noon and Other Stories and The Race and Other Stories.

From 1942 until 1946 Ross served with the Canadian army in London, England. In 1946 he returned briefly to Winnipeg before settling in Montreal, where he continued in banking until his retirement in 1968.

Ross’s later novels, The Well, Whir of Gold, and Sawbones Memorial, continue his exploration of prairie life and its power to challenge as well as sustain its inhabitants.

Upon his retirement Ross lived in Greece and then in Spain. He returned to Montreal in 1980, an two years later moved to Vancouver.

What you may have heard about As For Me and My House. . . 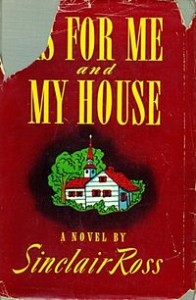 The town is Horizon, the setting of Sinclair Ross’s brilliant classic study of life in the Depression era. Hailed by critics as one of Canada’s great novels, As For Me and My House takes the form of a journal. The unnamed diarist, one of the most complex and arresting characters in contemporary fiction, explores the bittersweet nature of human relationships, of the unspoken bonds that tie people together, and the undercurrents of feeling that often tear them apart. Her chronicle creates an intense atmosphere, rich with observed detail and natural imagery.

As for Me and My House was nationally canonized at the 1978 Calgary Conference on the Canadian Novel as a classic example of the “failed-artist narrative.” It is the story of the wife of a small-town church minister, and illustrates the despair of life in the Canadian prairies of the 1930s – among other things, of course. In fact, it is famously know for the many things left unspoken or evaded, and the ambiguous natures of its characters.

What you may not have learned in your Canadian Literature class . . .

Ross’s homosexuality became public knowledge after the posthumous publication of the memoir, As For Me and My Body, by his friend Keath Fraser.

But on the topic of secret homosexuality in fictional characters, Ross said “I suppose a man would write that way whether he knew he was [a homosexual] or not.”

And I will just leave it at that.

For those interested in further commentary on Ross and As For Me and My House, I recommend Here is Queer: Nationalisms, Sexualities, and the Literatures of Canada by Peter Dickinson. As For Me and My Body by Keath Fraser offers portrait of Sinclair Ross himself, with a focus on the relationship of his writing and sexuality. And of course, you can still find As For Me and My House at many bookstores and libraries. Are you ready for some good old-fashioned Canadian narrative transvestism and homosexual fantasy – I mean, exploration of the bittersweet nature of human relationships, unspoken bonds, and undercurrents of feeling that often tear people apart? Yay!