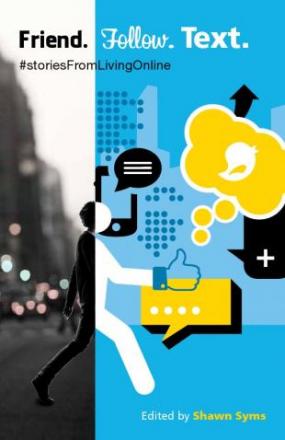 In Friend. Follow. Text., editor Shawn Syms offers a comprehensive exploration of all things online. Through 27 short stories, ranging from new writers to award winners like Zoe Whittall, we “follow” protagonists to a gay gym, an abortion clinic, an Indian wedding; on an international pop music tour, to an anonymous hook-up, or to a nightclub for one tragic evening.

Online communication dominates our lives more each year (remember the first time you said, “What is Facebook?). In Friend, writers attempt—sometimes expertly, sometimes clumsily—to make sense of the nuances of such communication. Ultimately, the stories seem to agree, we fail to find meaningful connections this way. Stories are often open-ended, unresolved, and the characters unsatisfied in their search for connection.

Alex Leslie offers her fictional vision of a Justin Bieber-like pop star in “People Who Are Michael.” Through expert use of the second person, Leslie positions the reader in an uncomfortable, yet familiar, voyeuristic role. Although “you” only see Michael as he is presented publicly—on TV interviews, Youtube videos, on stage—Leslie succeeds in rendering an intimacy between “you” and this fictional pop star, and the consequent trauma of the indiscriminate and one-sided nature of such intimacy.

One of my favourite stories is “No One Really Wants to Listen,” by Heather Birrell (though I don’t think she is a queer writer. Because this is a queer literature website, you would probably like to know that). Through posts in a pregnancy chat room, Birrell reveals a diverse community, from reproductive rights activists to conservative Christian moms, with names like “Straight Shooter,” “On the Side of the Innocents,” and “Wings.” Although the characters only meet virtually, this is one of the few stories that implies a redeeming connection; with the benefit of anonymity, the women discuss realities of pregnancy that are rarely talked about.

Besides these recurring themes of connection, writing about online communication apparently lends itself to a certain point of view and form, too. Of the 27 stories, 16 are told in the first person, and four in the second person. These are intimate points of view, and typically lead to an informal voice. And this makes sense—online communication is predominantly text-based and informal in its use of language. This leads to another pattern: of these stories, many take the epistolary form—a story in letters. Sometimes the “letters” are just 140 characters long, sometimes they are emails, sometimes chat room exchanges or blog posts where no one comments. At first glance, such forms may seem experimental and innovative, yet the epistolary story has been around for a very long time. Take, for example, Pamela, a novel published in 1740. Or Dracula, by Bram Stoker, a story told in letters, diary entries, ship’s log and other texts.

Of course online communication is different than a letter. It’s faster. It’s shorter. It is easy to send. I used to have a job that would email me about four times for every three-hour shift. Online talk is cheap, and sometimes, perhaps as a result, vacuous. Certainly, some of the stories in Friend fall victim to this. After all, if you write an epistolary story based on a form of written language that is typically void of authenticity and genuine feeling, then you may end up with a story that shares those qualities.

But I will have to think about that. That is a very simplistic conclusion, and there are many stories in Friend that got me thinking more about the nature of online communication. Others feel heavy-handed in their directive, with obvious “points” to make about such communication, or predictable outcomes. At 296 pages, it’s a massive anthology, and one that would have been stellar had 80 of those pages not made it into the book. For anyone striving to make sense of the experiences of “living online,” Friend. Follow. Text. is worth picking up.