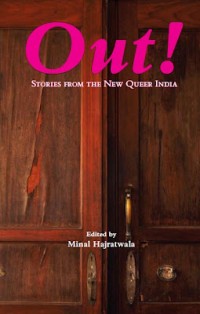 During my last visit to India in 2010 I noticed an overt shift: queer was everywhere–in mainstream news, family conversation, Bollywood nuance. It’s not that queer had been completely invisible before, but I didn’t feel that I had to search as hard. I felt more comfortable being out. The July 2, 2009 Delhi High Court ruling found Section 377 of the Indian Penal Code unconstitutional. Sex between men was no longer illegal, and India’s long history of diversity in gender and sexual expression could resume visibility.

So when Out! Stories from the New Queer India was published in 2012 by Queer Ink, I was excited: our stories, our bodies, our sex, our country and diaspora. But I was also anxious and didn’t expect much from the writing. I thought I’d get a few cliché stories about gay men hooking up in parks with priests, lesbians committing suicide together, groups of queers being harassed by police, men dying alone of AIDS.

Edited by Minal Hajratwala, this collection of thirty short stories from many regions and communities throughout India moved me through anger, tears and laughter. It is far from being the first collection of lesbian, gay, and trans writing from India; it is, however, the first collection since Section 377 was struck down. It is queer and the shift in tone is present. For a community who experienced decriminalization only a few years ago, the voices are clear and diverse and beautiful.

Characters throughout the anthology struggle with familiar queer themes like coming out, monogamy and polyamory, gender identity, love, shame, fear and acceptance. The collection opens with a gay man discussing Section 377 with fellow law students as it is being discussed at Delhi’s High Court. We move on to meet Kolkata’s “golden girls,” who plan to intervene when a young gay couple in their building breaks up. A dyke on a bike is discovering herself. And boarding school girls titillate each other. Two small-town girls plan to leave for the big city, only for one to pull-out as the bus pulls away with her lover standing on its steps. Parents recount as their child lies in a hospital bed waiting for sex-reassignment surgery to commence, one supportive, one resistant. One story is a tribute to Christy and Rukmani who took their lives in May 2008 in Tamil Nadu, resisting their community’s attempts to keep them apart. 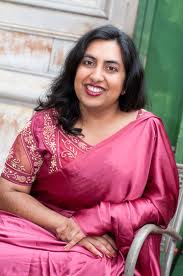 In “A Small-Town Girl,” Jhanvi finds out that she is in a non-monogamous relationship with the woman she just moved in with. As she reports on the suicide of two young women who were barred from seeing each other by their local village tribunal, she contemplates, “I couldn’t help but admire the cousins for their total commitment, the extreme to which they were willing to go to preserve their love.”

The final story in Out! is touching. Mayank is a gay man who chooses to marry Aditi and have a child rather than live with his male partner. He is hospitalized, diagnosed with AIDS and passes away quickly. A widowed mother chooses courage and love for the sake of her daughter by embracing her dead husband’s gay lover. This story explores the complexities of love, sacrifice and what chosen family can look like, and what is more Indian, or more queer, than that?

Out! closes with a conversation between the editor, Hajratwala, Queer Ink’s publisher, Shobhna S. Kumar, and two artists Nandita Das and Chitra Palekar, about their work as LGBT allies and activists.

The stories cover many facets of life, class, religion, regionalism, culture, sexuality, and gender identity, which are all realities in today’s India. This anthology further complicates perceptions of what it means to be queer and Indian, or queer in India today. The stories are a true reflection of the country as it stands in all its multidimensional glory–and all that it is striving to be.

Rachna Contractor is a freelance writer interested in art, community and social change.