When I was about twenty years old, my brother around seventeen, our dad took us out for what was meant to be a nice family dinner at one of Vancouver’s tackiest sushi restaurants. Fairly close to a university, the place’s tagline was “Miso Horny” (Get it? Just like that war zone Asian sex worker in that movie!), and it was done up in quasi-Tiki decor that seemed designed to reassure frat boys in their choice of shell necklace. Ringing the outside of the dining area were normal tables, but up the middle were a collection of semi-enclosed, ersatz–South Pacific hut-tables, one of which had been reserved by my dad.

There was, however, a hitch in the plan (one that went beyond mere matters of good taste). For whatever reason, the diners that night were taking an inordinately long time in the Tiki huts. Dad was uncharacteristically ornery and short-tempered about the seating arrangements, insisting that he had reserved a hut for his family. For our parts, my brother and I—being, with the exception of a few forever-lagging body parts, grown men— squinted in petulant confusion: Who the fuck cares? Insisting that we were hungry and largely uninterested in themed seating, we cajoled Dad into accepting the host’s offer of a regular table along the wall. Once seated, Dad nervously and enviously eyed the shelter of the Tiki huts.

As it happens, he hadn’t chosen the special tables for the whimsy. He had wanted the privacy of those obnoxious enclosures because he had something important to tell us. But having screwed up his courage for the big night, he wasn’t going to stop now.

We sat quietly for a second, absorbing his words, reading his sweet and vulnerable and expectant face.

“Is that why the house is always so clean?” I asked.

The revelation was sort of a non-surprise surprise. This was just a few months after my little brother had come out of the closet, so it felt like a time in my life when if somebody had something important to tell you, it was probably that they were gay. Our family was like something produced by the writers’ room on a stale sitcom, turning everybody gay as a means of producing a host of zany new plot lines.

But my brother’s coming out had been a mere formality—as a kid playing dress-up, Nick had cycled through more princesses than the British paparazzi. He took a minute out of his schedule, the tiny open space between giving shoulder rubs and making collages out of celebrity magazines, to tell the folks closest to him that he was gay. He didn’t even bother to tell my aunts and uncles; he just started showing up at family gatherings with dudes and nobody batted an eye. Things were different with my dad; I’d always thought he had a moustache because he was French.

I’d known that Dad embodied a different kind of masculinity. It was one that I revelled in and sought to pattern my own after (See? How butch is it to get excited about patterns?). He was handsome, strong, clean and well dressed; he took us to the symphony, to see Shakespeare; he knew nothing about sports or cars and, just as importantly, was totally unperturbed by his lack of knowledge. He was the kind of man I wanted to be—we could love live theatre and breasts! As a young kid, I’d felt a trill of superiority over the idiot boys who played soccer on the gravel field at recess and lunch while my friend Chad and I went off to a remote corner of the playground where two of our female classmates would lie down on top of us (though a word to the wise: don’t do this if you have a younger brother who gets out of kindergarten at lunch hour and your Mom waits for him at a car that’s parked where she can clearly see your little junior swingers excursion).

The guys-’n’-sports-sports-’n’-guys incarnation of masculinity always seemed to be a world full of homosocial platitudes, plus a lot of running and sweating. Who gave a shit about sports? Better to be a man like my dad. When the Vancouver Canucks made their run to the Stanley Cup finals when I was thirteen, I pretended to care because my high school crush, Kathleen, would hold my hand as we watched the game at a birthday party and squeeze when the Canucks did something exciting (having been taught nothing about the game by my father, I had no other metric for assessing what was going on). 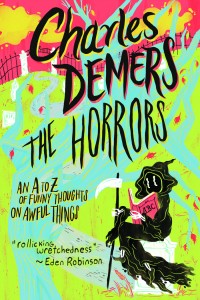 Not that I wasn’t occasionally tempted by the musky side of masculine gender “performance”—Judith Butler’s term was an apt descriptor of my theatrical attempts at butch. Succumbing to peer pressure and wanting, Pinocchio-like, to be a real boy, I bought a car magazine one day, memorized a handful of incomprehensible (to me) statistics about the engines and then, having no means of contextualizing them on my own, took wild guesses as to which were impressive. I practised speaking about them in excited—no, rapturous—tones, assigning random emphases to various terms and syllables.

I remained, though, largely mystified by straight male culture. When we were sixteen years old, my friends and I, all young communists, pined to visit Castro’s Cigar Lounge downtown— without fake ids, though, it seemed as much a long shot as when a band of rebels disembarked the good ship Granma only to face the troops of Fulgencio Batista (incidentally, I have no recollection of what we expected to find in Castro’s Cigar Lounge— doubtless some Marxist salon with overstuffed leather chairs and a libertarian approach to smoking bylaws). One night, unable any longer to resist our curiosity, we did our best to age-up, carefully choosing our clothes and sneaking into my friend’s older brother’s room for some hair gel, because for reasons I can’t possibly understand today, we apparently didn’t have access to our own hair gel. Crossing the threshold into Castro’s, passing a collection of billiard tables, we moved to the bar and asked for the pool balls, which were handed to us without a fuss. We’d done it; exchanging sly smiles, we made our way to the felts. On the way, I noticed an attractive server dressed in tiny aggressively sexual cut-offs. In a fit of extraterrestrial naïveté, I (honestly) thought to myself: “Those are inappropriate—it’s weird that her boss lets her wear those to work.” We then noticed on the wall a tacky pastel line drawing of a naked woman with feathered hair—the kind of thing a young man in the early 1980s might have dreamed of airbrushing onto the side of a van. Just as we began piecing together where we were, a stage in the far corner of the room began to fill with artificial fog. Our feminist sensibilities outraged (yes, really), the four of us hightailed it, beating a tactical retreat in tribute to the guerrillas before us. (In the years since, sitting in the sad sobriety of post-ejaculation, closing the browser window, I’ve often wondered where that sweet sense of shock went.)

In truth, much as I’d patterned my own heterosexuality after my father’s heterodox approach, I remembered, in the aftermath of his announcement, that I’d suspected he might be gay back when I was thirteen. It was a few years after my mother had died and Dad was seeing a lot of his friend Don—a sweet doeeyed man with whom he would sit in his room with the door closed and watch movies (Jesus Christ, was I ever so fucking gullible? I feel like even a six-year-old waiting for the Easter Bunny to arrive would have nudged me and said, “Hey, get a load of the queers!”). Lying in bed beneath a Montreal Canadiens pennant that signified 100-percent ethnic affiliation and 0-percent interest in actual sports, I would pray to God that neither my dad nor I was gay. I’m not totally sure where that came from—it wasn’t what I’d been raised with. I think it just seemed, to me, like a burdensome, shitty thing to have to deal with; in which case, I don’t think I was incorrect. That said, there was clearly some adolescent homophobia (in this case literally fear, terror) in the mix. Responding to a behaviour problem reported by my teachers and school administrators, my dad had threatened to enroll me in a local private all-boys school, a fate made scarier to me by the academy’s colloquial name, Homo High; Dylan, one of the other class clowns/denizens of the principal’s office, would taunt me that I was going to be sent to Gaylesbian School, running the words together into his own little portmanthomo. If only I’d known to call my single dad’s bluff: there was no way he could have afforded to send me to private school.

In the instant my dad came out of the closet, the only thing that worried me was what it might mean about my parents’ relationship. To have a sham marriage added to my dead mother’s collection of tragedies would have been far too much to handle—I’d sooner have spent a thousand summers at Gaylesbian School. Dad calmly assured us that he and Mom had loved each other very much, that it was a real marriage and that if she were still alive, they’d still be together. I believed him, which, at the time, may have been another case of Watching-Movies-with-Don gullibility. But later on, my dad’s mom put my mind at ease. She told me about Dad’s first coming out, when he was about twenty, after he’d left Montreal and arrived on the West Coast, sending a letter home to his mother explaining to her what she already knew: that for her petit chou, hommes was where the heart is. She had written back with her unconditional love and support, explaining— as I understand that many mothers do—that she’d always known. Some time later, he wrote to tell her he was in love with a woman, and she told him he didn’t have to pretend. He assured her that he wasn’t pretending, that he was in love, with a woman—my mother—and they were getting married. The whole story sounds even sweeter in French. My panic about the authenticity of my parents’ romance was satisfactorily dismissed.

What I probably should have been worrying about, instead, was losing my model of a cool, gentle, sophisticated heterosexual manhood. As the sole familial responsibility for vaginal intercourse fell on my shoulders, I was left behind. I’d grown up thinking that the men in my family were swans, more elegant and sophisticated than the ugly ducklings surrounding us. As it turned out, though, that was only partially right—Dad and my brother were swans, but I was just a duck, and, in the end, as they opened their white wings to their full breadth to take flight, I’d have to learn to live among my own kind, sinking into melancholy as I realized all the other ducks wanted to do was talk about how Anaheim is doing in the NHL Western Conference.

This excerpt published with permission. To purchase The Horrors, visit your local bookstore or find it online from Douglas & McIntyre.