A: i have fed a dying gorilla peanut butter in a strip-lit hallway.

Q: were you the receptive partner?

now he is suspended between us. technicians dress and jug him, though he is still living. secretaries step below his outflung arms, slipping in the blood which drenches the manila files and the well-kept databases.

Q: did you discuss HIV together at any point before or during the encounter?

he signed to me on his fingers, so much like a man’s, so delicate for all their girth: behold your father, behold your son.

Q: have you had historic sexual experiences which you have found traumatic?

quick-handed young men drive a communist into the agora, break his bones with hosepipe lashes, light his neck aflame with dripping gobbets of tar that run together with his bubbling flesh. they pass a bottle of malt liquor among themselves and curse him in the idiolect of the northern swamps. they have a pantechnicon badly hand-painted with an osprey insignia and they may or may not be real river police. in any case, they keep what rule of law remains in the city, lifted from the delta on the rotted stumps of fishing villages, at the brink of collapse back into the alluvial mire. accordingly the stall-holders neither chant nor jeer. mamas in jade serapes make their purchases and return home in haste, clinging to the gold-flanked omnibus.

Q: shall I put that you prefer not to answer?

this is what I am trying to tell you, my darling. in the market is much bushmeat, hacked in stinking lumps, skewered from hooks and festered with flies. beyond in the bush men of science hunt down great apes. see the chatter-jawed mangabey brought low with buckshot, the crab-eating macaque garrotted with glass-dipped wire, the spot-nosed guenon burned. see most especially the cornered chimpanzee with a man’s reach and a wolf’s jaw, fever frothing up in her blood as the hunter gags her with cloth, opens up her bow legs with perverted care, has his way as white men do among the spent shotgun shells, the spatchcocked young. this is what I am trying to say.

Q: was this most recent partner someone you have slept with before?

Q: are you aware of his HIV status?

a lemur clung heavily to his back, shaved, skinned, raw and bleeding, its arms as long as a man’s arms, its guts as warm.

Q: what do you know about the way HIV is transmitted?

others like it are parcelled up and smuggled around the world in hand luggage. monkey-meat at market, portioned for sale. dripping haunches of contrabanded flesh.

Q: what do you know about its prevention?

there is nothing to be done about these things, you see, my love. five million tonnes of meat traded daily across our hungry hemisphere and i am here in this dank little office, being dripped on by this gaunt and godlike gorilla with mascara smeared across eyes as bright as a man’s, being asked about alkyl nitrate and the bruising at my joints. you will forgive me if i laugh.

Q: how do you tend to meet your partners?

smallpox consumed the rubber-tappers and studious men grew concerned. the troopers checked one another’s bollocks for chancre and laughed and cuffed their women and in the night they wept fearfully. something, it was said, had to be done. so in the labour camps we vaccinated them by force. the blood leapt in fountainous arcs from arm to arm, rotten and transfused, and the hard-faced children screamed at the needle’s bluntness. xenotransfusion from brute to man, done, we said, for their own protection. men of science. my god.

Q: do you use any chems or stimulants to aid you during intercourse?

Q: are you aware of the precautions you should take when meeting partners through gay dating apps?

in the fleshpots which cluster like leeches around the garrisons of the lawless seaboard, it is not uncommon to come across a flea-bit old gibbon, shaved and plagued by flesh-eating tics which burst scarlet when pressed with the thumb. if the carcass goes to market once the anus has prolapsed and will no longer serve purpose, the meat is likely to be laced with the xylazine and bootlegged liquor used to keep the animal docile and subservient. caution is accordingly advised.

Q: What factors prevent you from using a condom?

but caution is not taken, only samples of pus from the black buboes bubbling around the crotch, rich with lymphogranuloma venereum, thronging with curious and unspecified disease. weak-chinned white officers laid low by the labour of women: strange victory of the damned: that victory revenged on their unquarantined sons, on their son’s sons thereafter.

Q: Do you find it difficult to ask your partners to practice safe sex?

now we are all wrapped around with clear tubing, conveying plasma from joint to joint, ensnarling the technicians, overturning the ranks of urine samples they convey to and fro down the clinical halls. even the dead are conjoined. we haul them with us through the black-lit bars, macabre dark mounds which are not spoken of, and they snare us with looped intravenous drips and drag us choking into their world.

Q: swab your inner cheek and uvula. you will gag a little: this is normal.

i cradled his head in my hands. this is what you must understand. that old simian queen. i fed him four bottles of cheap white wine and i painted his cheeks. my sons, my fathers, why have they forsaken me. i did as i was asked. apes, apes, drawing slight pleasure from the earth, its budding fruits, its streams of water.

Q: insert the second swab two to three centimetres into your rectum and rotate it several times.

and now he is suspended from the ceiling like a child’s mobile, mortified by iron needles, necrotised by tumours.

Q: unfortunately, pre-exposure prophylaxis is not available on the NHS.

he falls apart, is consumed.

Q: you will receive the results of the examination within a week, by text.

Q: Is there any way we can help you to take fewer risks?

his carcass is hung from a hook. there is nothing more i can say.

Q: is there anything else we can help you with today?

this is the secret name of the devil: the very ape of god. 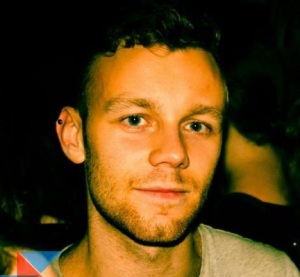 Matt Broomfield is a writer and activist currently living in Lesvos, Greece, working in solidarity with the thousands of refugees still trapped on the island. His prose has been published by Litro, The Mays, Anti-Heroin Chic, and Cherwell, and his poetry by the National Poetry Society, the Independent, and Bare Fiction. His work was last year displayed across London by Poetry on the Underground, and he is a Foyle Young Poet of the Year.