Falling in love with women taught me how to read poetry [properly].

I was trying to explain to a questioning friend what making love with a woman was like. She had inquired. I was also trying to convince her to sleep with me. “I could show you beautiful things,” I said. I wondered how many other women have said that to women they are infatuated with. I meant that I could show her that:

She’s brilliant. A PhD student with honey brown hair and big, brown eyes. Eyes that turn small white blossoms inside of themselves when she talks to me. “It was only after I’d started actually sleeping with women that I began to read to poetry, and by read, I mean actually understand it.” She writes, too. I wasn’t sure how else to make my point. Another straight girl. This broken-hearted thing had already become cliché. Okay, one last try—“I learned a different language by making love to women,” I said. “I could understand what love poets were spelling out in their poems. Metaphors made sense. I began to read poetry like water.” No. Less lucid. “I began to read poetry like red wine.” It is always heavier. But we all know that. Earlier in bed I’d told her: “I have a crush on you.” And shit, it did not come out the way it was supposed to—it was supposed to come confident, my voice husky with early morning sun and rough from the clouds of jasmine shisha we’d smoked all night. It came out like this instead: “Ah. I think I have. Ah. I think I have ah crush on you.” I am 26 years old. People are proposing to each other and I used the word crush. [I need to interrupt myself here: I’ve just realized that I only write poetry when I’m infatuated. This is dangerous. And haphazard. This is no guarantee for a writing career, but it is a guarantee that I will turn into a lush someday.] Her response was silence, at first. Then “thank you for being honest with me.” Always a stab to the gut and then the feeling of relief. Now she can take what she will of this. Bleed away. She fell asleep a few minutes later, and so did I. We slept in the afternoon sun. It was anticlimactic. It was very nearly perfect. But what I had told her was true. Poetry became plain as water and alabaster. I am not bragging. I understand you now, Brossard! Marlatt! Warland! Mouré! You all make some sort of sense. Ah. The first time. The first time felt like another body [my own, freckled. Hers, goosebumped] on a blue planet [my best friend Serena Lou’s basement] on graduation night in twelfth grade and it wasn’t a coming-to moment and it was a scale tipping and it was “the cookie crumble of earth” and it was a bare mattress which was springy and stained already. It was drunken laughter from the hallway outside and ah … It was fear of the doorknob being turned moment of—The first time I read poetry and understood it I already knew quer—to queer—to make strange and this is the thing—I don’t so much want to sleep with her as I do want her to read how I read and see what I see. If only. Imagine the close reading possibilities! Making love with women has practised my close reading skills. Ah. The academy would be proud. Those bylines and subtext the “minutiae of lash” and arch of foot and—zoom in—one craft fair earring dangling in straight red hair [my ex]. Side grin. I saw skin for the first time. Think about that. Slow it down—

I saw skin for the first time.

I saw the page for what it was. It was alabaster and spilled paint and cheek. The words were a too-big aloe vera plant growing in a red clay pot. The roots want out! There’s grief here too, if you can feel it. Maybe she will never. She probably will never. There are so many that never. For once, I saw the page for what it was, a spectre, it’s a spectre like the black hollow circle in the centre of a guitar that the fingertips of a musician always dip into just ever so. Gently.

To strike a chord.

We’d had spaghetti Bolognese that night. The sauce was rich. It mixed in my mouth with the shisha smoke. The windows of my apartment were steamed up and dripping condensation, but I could still see the moon. Was it waxing or waning we’d both wondered out loud. [Take my hand.] Was it turning just a little ivory as the night hours swooped up? [Answers to these questions were important.] Would you please.

The page implores. A poetic corpus. I’ve read some pretty scars and some fresh scratches, delinquent. When I open a collection of poetry now—the right kind—there is a “cream rhapsodic streaming” it is the page stroking back. Love poetry isn’t easy, though, and your eyes are like limpid pools. Careful drowning. Inhaling water, flush of smoke. Your eyes like limpid pools, the surface layered over with white blossoms, twists of jasmine curling up. Spanish moss heavy in the air and pressing stillness. Foggy moors. Weigh me down. [I could breathe the word please.] I will ask you one day: how can I slip in, without making a ripple, right beneath the words on your page?

The page does implore. You typed this out from hundreds of miles away in a city of stone. Three years later, I will accuse you of. [A heart on ice.] “Who wrote this?” I asked. “Me or you?” I had forgotten across the golden field of wheat, hollows pooling with shadows in the forest beyond. “Did we one hand?” [I know for a fact there is only one pen shared between the two of us.] Is this a fractal. Is this a decimal this “like art?” I. I put you between two square brackets. Now I can look all I want. You. Straighten it out. This is the danger—you in the purple skirt, squinting into the sun. You hold your palm open to the sky. In the garden around you the flowers wither, very fast, as if on film. They faint, one after another.

I had you read you and you liked what you saw, I think. At least, you were impressed. Good. I’ll dive in now, not a ripple … the water is black beneath the peal of white above and I can see perfectly. I did not expect that. Ah. I had you in the sheaf of the page. I had you. I would like to have you. “Shit,” I told my friend over a balcony smoke, “I sent her this. This I told her to read she’s reading this and.” “Did she freak out?” “No, she’s cool. She’s been very cool about it.” [it as art it as strange] “I did apologize for being intense, though. I did chalk it up to being passionate which functions as some sort of excuse for gayness, sometimes.”

“I know what I’m doing,” I told my friend on the balcony. “I don’t just hit on straight women. That is not my shtick it is not a ‘fun challenge’ I am not into the idea of ‘turning’ a woman I learned not to do that in first year university jeez that’s basic I can compartmentalize my feelings when I need to I’ve had practice doing this.”

Flick the butt into the air.

“It’s just that there’s something different about her.” [blossoms turning, they turn like snowflakes, drift down into still black pools]

I hope that the end result will be [what?] a winter sunrise seen through the chinks between my white curtains from bed her arms around me her brown nipples [I imagine this particular, this fine detail] against my back my one hand tangled in her hair the other down the early light will be gray the sheets gray and then the colours will come.

Note: The phrases “cream rhapsodic streaming” and “minutiae of lash” are quoted from Daphne Marlatt, This Tremor Love Is (Talonbooks, 2001). 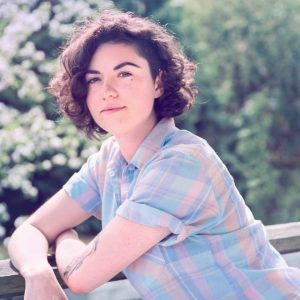 Rachel Lallouz‘s work has appeared or is forthcoming in Cactus Heart Magazine, Spectra Journal, SAD magazine, and Theories of HER, among others. She is the previous co-editor of Queen’s Feminist Review, and previous editor-in-chief of OutWrite: A Queer Review. Rachel recently completed a two-year stint as a community journalist for the Royal Canadian Navy. She writes in Victoria, BC.