The scariest part was that
they liked you, making jokes
about the dick you don’t have.
And there were some days you’d

rather not sit with them at 9am
“lunch,” congregating with the
regularity of high-school cafeterias.
Like the day when, each time

you stood, you glanced at your
seat, having gone to the men’s
to stuff toilet paper up your vagina.
Unable to ask for a solitary

sanitary napkin, too timorous
for a tampon. Unable? Unwilling.
They didn’t need to know more
than the outline of your child-

bearing contours when you only
planned to stay six months. You
made it three before your joints
couldn’t bear the early-morning

repetition. “Wait ‘til you’re my age,”
a mocking refrain from a woman
who called in sick for her first time
in two years, when for one, you’d

claimed as rabbit-armour?
Now, you wonder whether
you should have spoken up
when the manager asked,

“So, why do you go by
Simon? Is it your middle
name?” and your supervisor
grimaced. Whether you might

known. You wonder if you both
needed it, rediscovering the
Christmas cards they gave you,
signed by family you never met. 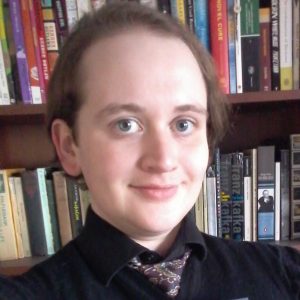 D. Simon Turner is a poet, short fiction writer, playwright, and philomath. They have previously been published online by bird, buried press and in the Aurora Award-nominated anthology We Shall Be Monsters (Renaissance Press). They have written four plays produced in Peterborough, Ontario.