after “Bilingual Pathways” by Dominik Parisien

In Paris the air tastes like pain, ancient,
golden, Gauloises, Gitanes, paint the skin
with guttersweat grease. I learn to limp

through the Louvre, loving the Winged
Victory of Samothrace both for slowing
the staircase pace, & reminding

what holy is. Armless, headless, “right wing
truncated, reconstructed” nonetheless, a vision
of wholeness. Let my body be so in translation.

Is the Mona Lisa smugger on oxycontin
or is that my blood sugar dropping?
“Does this soufflé contain gluten”

dinner in the Michelin-starred restaurant,
learn to starve in new languages, sicken
myself bitching about the Eiffel Tower

crouching in a rat run parking lot.
Cathedrals I can’t climb are yes, quite
staggering from outside, but treasure isn’t

left on the curb to writhe, the theremin
whine of tinnitus more tedious in
French. I’m queasy on the Champs-

Élysées and throw up again in the Seine.
The pharmacienne sneers at my stinging
skin, recommends sixty euro Avène,

can I keep walking through this pain,
temporary, like Paris, September, the sun.
Next time I’m here might be never.

It’s no honeymoon hobbling on cobblestones,
but Larry Eigner wrote from his room,
how can I complain if once a decade

I leave mine to board a plane? In an alley
a refugee mother shelters her son from my eyes,
teenage soldiers with submachine guns saunter

The Pavillon de l’Horloge, I drag myself
to the Sorbonne to kiss Death at the Faculté de Médecine,
Henri Allouard’s marble reaper leans

on a gleaming scythe, my teenage goth dream
date, all boneshroud & fingerbanging, Death,
Death, who comes for you? Who knew Shakespeare

& Co. was so steep & narrow: Give what
you can, take what you need. Can I give
myself Paris, can I take a step, can I give

you a sign I need help, can I take living
in need? Help me please, don’t help me, give
me breath, dignity, jesus fucking wept, give

me strength to forgive myself for giving
a shit what people think if I crawl, or
weep, moan or beg, if I am ugly, “crazy,” poor,

in pain, not OK. Can I be here in
Paris, as I am, crippled, not chic,
middle-aged, ignorant. Left foot, yes then

stamp, cramp, can I accept not much is
how we expect, if we get what we need
not to want more than that. Double up, sob, hot stab

but can I take another breath? 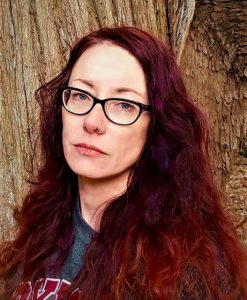