Here is the final of four interviews and story excerpts as part of our Youth Spotlight project. For details on this series, see our original post.

“Sushi Tears” by Emma Bishop chronicles the process of coming out while also interrogating gender norms in the context of summer camps and the constraints of normalcy. Emma’s prose will impact readers in ways they may not expect, but in ways that are necessary to help queer individuals and those working at summer camps work to improve the lives of young people.

“Sushi Tears” gave me a lot to think about. As someone who grew up within the context of a lot of religious summer camps, Emma’s narrative made me think back to my own childhood and evaluate it in a whole new light. Though I wish we could publish the whole piece, the excerpt included here will very much affect readers, whether they grew up in a similar context or not. But before I lose track of my train of thought, here’s my interview with Emma!

Tell me a bit about yourself and how you came to start writing?

I was born on Salt Spring Island and spent my early childhood living in an old house on a vineyard. I have loved reading books and creating stories since my youth. I would read magazines while picking grapes from the vines. I still have a picture book I wrote in elementary school. I loved writing comics. I also kept a journal where I would write about anything that was going on in my life, no matter how mundane. It felt important to document things. Writing has always been with me, since those early days.

What inspired you to write about your own experiences through creative nonfiction?

I wanted to capture the strong emotions I felt in my life in a way so that I would be able to look back on it and remember just how powerful those things that I was going through were, even if they might fade with time, and also share something that others could possibly connect with.

What have you been working on since this piece?

I’ve been writing articles for my school newspaper, poetry, creative non-fiction and keeping a journal.

Have you ever come across a book that made you rethink how you approach writing?

The collection of short stories All the Pretty Girls by Chandra Mayor offers humanity to women who are often not afforded any, due to unfortunate circumstances that land them in poverty or abusive relationships. Each story created its own world that portrayed the complicated nature of emotions and relationships in an evocative style that I admire.

What motivates you to write?

I’m motivated to write by the beauty of being able to conjure an image or a moment in someone’s mind. I want to move others with my writing as others have done for me. I also want to provide the world with something new, something to make people consider a different perspective and maybe understand something in a new way. Writing is an important element in shaping our world and our understanding of ourselves.

What is the first book that made you cry?

Aristotle and Dante Discover the Secrets of the Universe by Benjamin Alire Sáenz. It was the first time I’d ever read a book that I felt reflected me profoundly.

There was a girl who captivated me. I bumped into her in the hallway and blushed. I woke up from a dream about her and I finally realized why I could never find words around her. This crush surprised me but looking back, I saw signs I’d ignored, such as the folder of photos I kept on my phone of Marina and the Diamonds, a pop singer. She was my #WomanCrushWednesday, my “girl crush.” I thought she was beautiful and hot and mesmerizing and yet I still considered myself straight until the crush on a girl in real life. I channelled my attraction to women towards a celebrity, someone untouchable, so that there weren’t consequences. I didn’t have to avert my eyes or control my body language. I could simply admire her. When I finally acknowledged a crush on a girl I knew in real life, I moved through the world differently. I was hyper aware of the way people talked about gay people, even the offhand comments like “That’s gay,” because I needed to know who would treat me the same.

I could feel the distance between my closest friends and family and myself growing as my awareness of my own sexuality grew. I became a porcupine, puffing up my quills so no one could get too close. I avoided conversations about crushes and dating. When my friend asked if there were any cute boys in my class, I faked a laugh. This facade made me feel isolated so I turned to Skam, One Day at a Time, and other movies and TV shows with LGBT characters that reflected my feelings. In these stories, I found the confidence to tell a few friends the truth.

I told one friend in the cafeteria. While stabbing hash browns with my fork, I launched into the preface I’d prepared by combing through online forums and reading the articles that show up when you google “How to come out to your friend.”

“So, I want to tell you something. I’m nervous because I don’t want this to change anything… Um…” I took a deep breath and looked out the window at the expanse of mountains.

“Oh, that doesn’t change anything,” she said.Later, on the bus to the grocery store, she leaned on my shoulder and I rested my head on hers.

Coming out to my dad felt like the biggest hurdle. Every time I considered it, some detail popped into my head: How he skipped past the LGBT section on Netflix, or how he laughed at the homophobic jokes on Friends. His imitation of a gay man. He would talk about how he didn’t understand why people made a big deal out of it. Deep down, I always wanted that pride I saw in others. I wanted to be loud and unashamed. I didn’t want to hide my journal under my bed anymore or switch tabs on my computer when someone walked in the room, but his words haunted me.

He used to say, “When you have a husband…” and my stomach turned because I couldn’t see that happening. Later that year, it changed to, “When you have a boyfriend… or a girlfriend.” Maybe he was starting to see me. Was it my short hair, the Tegan and Sara concert I’d gone to, or my advocacy for the LGBT community? Even so, I wanted to make it clear that I wouldn’t live in silence anymore. I found the words and put them in a letter one summer night, around 1 AM. I couldn’t fathom the idea of saying it to his face, to see his expression change, revealing disgust or disappointment. It took months before I got the courage to leave it on his desk. I psyched myself up by watching coming out videos on YouTube. Then I went to the library, trying to stop the worry that I’d made a mistake by browsing the familiar shelves. I borrowed a graphic novel and went for sushi. As I was sitting down to eat, I got a text.

“Thanks for the letter and opening up to me. I’m proud of you for standing up and being who you are.” 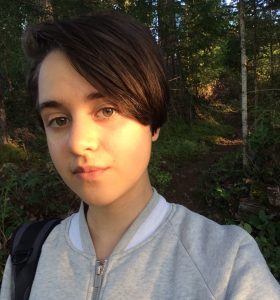 Emma Bishop is an English student at the University of Victoria. She grew up on Salt Spring Island where she loves to go on hikes and swim in the lakes. She spends a lot of her time reading, writing, playing guitar, and listening to indie music. You can follow her on Twitter @emmagbishop.