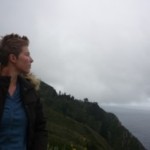 It was the final semester of college. I was sitting with one of my advisors in her office, and we were reviewing my most recent batch of poems and flash-prose; two of them were about having sex with a woman. Yes, they were big, queer, gay-ass poems imbued with desire and feelings (So. Many. Feelings). My advisor, while endlessly kind and approachable, was also (as far as I know) straight, intimidatingly beautiful, and making a big splash in US poetry, so I was nervous. When we got to the poems in question, I laughed awkwardly, rolled my eyes, and said, “I mean, is it really that important to write about queer sex?”

She blinked at me for a moment as though I had said something very silly indeed, then told me seriously, “Thea, of course it is important to write about queer sex.”

It was one of those rare, magical moments where I heard what I needed to hear, and never looked back. I can honestly say I have never again questioned whether there is value in writing about queer sex. After all, if more straight writers questioned whether or not it was valuable to write about straight sex, I’d have read a lot fewer accounts of backseat trysts that are peppered with words like “quivering,” “salaciously,” “spurted,” and “thrust.”

Great, good for me. But maybe you need a little more convincing, so if you find yourself doubting the worth of your sexy queer words, here are just a few reasons to reconsider:

If no one told their queer sex stories, how the hell would anyone know about queer sex? Judging from mainstream porn we certainly cannot trust non-queer-identified people to give us an accurate representation, so it is up to genuine bonafide queers to combat the stereotyped bullshit with actual lived experiences. Representing a range of sexuality not only helps us build community with other queer folk by recognizing common experiences, struggles, and desires, but also reminds the world that each human is different, and hey, LGBTQ folks have their own individual practices and preferences, just like any other homo sapien. And bonobo chimpanzees.

Won’t Somebody Think of the Children?

Young people often navigate coming into their sexuality by the landmarks society gives them. So, while some people find queer sex writing pointless or frilly, it just might open the door for some young queer-to-be. The greater the diversity of content we make available, the greater the chance a young person has of finding experiences that speak to them and confirm that the feelings they have are not wrong or unnatural. How cool is that?

Too Much Bad Sex

There is a lot of bad sex writing out there: uninformed, offensive, or just poorly written. You should write some good poems or stories about sex, so the chances of coming across good sex writing are higher. Please, do it. Seriously.

Do it for Science

When our society collapses and the archeologists of the future/Alpha Centauri find documentation of our world, it would be tragic and remiss if they never found out about queer sex and how very very awesome it is. It would be like not discovering Machu Picchu, or the Acropolis, or Abba.

Like I said, there are lots of reasons writing about queer sex of every variety is not only important, but necessary. Also, who told you you need a reason? You don’t! If you want to write about your fabulous sex life, then do it. If you want to submit or post it in an appropriate forum in print or on the web, by all means, do so. There are people out there who want and need your words.

*Please note that, while I mostly use the term ‘queer’, I mean this to be an umbrella term for all of those lovely letters (LGBTQI, etc.) and do not intend to exclude anyone of any identification or orientation.

THEODOSIA HENNEY is a Pushcart Prize nominated queer whose poems and flash prose have appeared or are forthcoming in over a dozen publications, including RHINO, Grey Sparrow, Fifth Wednesday, Vestal Review, Ozone Park, Dirtcakes, and Plenitude Magazine, Issue 1.