This review posted with permission from Coastal Spectator. 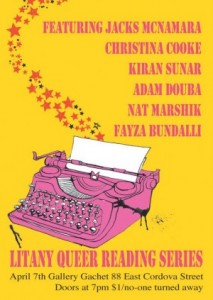 The first Litany Reading of the year (back in January) was so well-attended it almost burst the small comfy surroundings of the Rhizome Cafe on E. Broadway in Vancouver. So well-attended that I couldn’t get in.  On April 7, Gallery Gachet on Cordova offered a larger space to house the queer reading series. This larger-but-still-packed event was certainly a success for co-hosts Leah Horlick and Esther McPhee, both graduate students with the University of British Columbia’s creative writing department.

Horlick and I chatted briefly after the evening had wound down about the influences on the creators and the origin of the event. The series itself takes its name from Audre Lorde’s poem, “A Litany for Survival.” When co-creators McPhee and Horlick noticed a dearth of queer, anti-oppressive spaces and readings in Vancouver (with few exceptions, notably the thrilLITERATE series which was organized by Vancouver-based queer author Amber Dawn from 2007 to 2012), the two engineered the Litany reading series .

The evening introductions started with pronoun usage, identity and biography. Readers laid bare their histories in this safe space and were appreciated for exactly the person they identify as, whether the pronoun be she, he, or they. The showcase of five readers, with Adam Douba unfortunately out sick, contributed life experiences that most of the audience could relate to. First reader, Fayza Bundalli, explored rites of passage through coming out. Her frank, embodied performance of queer creative non-fiction was an excellent introduction to the Litany atmosphere. Kiran Sunar’s unfinished manuscript work about brown family queerness and diasporic existence in the Fraser Valley was impassioned poetry trapped in prose sentences. Nat Marshik’s short poems were sweet honey in my ears, a quick whisper of love affairs. Christina Cooke’s evocative short fiction brought sense memories of “home” into the gallery. The featured reader, Jacks McNamara, a Bay Area genderqueer artist, brought the house down with sexy queerotica. Jacks cooed short, punctuated bursts of radiant orgasm. I adored the high these writers gave me, and I floated out of the Gachet.

The next Vancouver reading will occur some time this summer. Check Facebook or Tumblr for updates.

Dorothy June Fraser is an MA History in Art student at UVic and the online gallery curator for Plenitude Magazine.