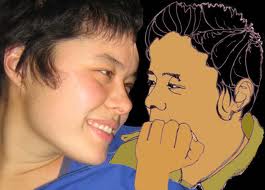 Elisha Lim’s work makes me think in whispers. Their voice, narrating videos or voicing claymation figures, is coy and intriguing. Their most recent work, however, focuses on different voices: those of Queers Who Pray. Lim “loves to praise God,” even though that devotion is intimidating, perhaps even daunting at times, considering the treatment of those who are openly queer in religious sects that condemn non-normative sexualities and gender presentations.

Lim has recently launched an indiegogo campaign to fund the completion of Queers Who Pray. The campaign has a goal of $2000 to meet in order to produce the next segment of the film. You can donate and watch the trailer here.

In the trailer for QWP, Lim animates a portrait of Vivek. I watched their pencils move up and sideways, animated on the page. Vivek’s face emerged from details, starting with his eyes. Lim’s smooth, confident lines portray a queer whose relationship with god was once his safe place, a space of love. This series will focus on queer people who practice four sects of religion that de-legitimize queer practitioners of prayer as much as dogmatize queer living: Islam, Catholicism, Protestantism and Judaism. By giving space to queers who practice to narrate their relationship to prayer and drawing them, Lim’s rendering is a short devotional to those who pray, even when it’s stigmatized to do so.

This work builds on the wealth of material we can see on Lim’s YouTube channel, where they question the roles of gender binaries, love, big city alienation and affirms the value of queer family history. They also have an Etsy store, where they sell graphic work, calendars and more. Upcoming projects include a graphic novel set for next spring and the goal of creating new art, everyday. You can follow Lim through their website.

Elisha Lim is a talent that can’t be denied (even by the art schools that are kicking themselves now for not admitting them years ago). Their work exalts non-white, non-straight and non-cisgendered experiences that often go unrepresented, working with such queer and radical institutions as the Feminist Art Gallery and A Space, both in Toronto. I’ll be watching for more, waiting, anticipatory whispers filling my head.

I really hope the crush is mutual . . . because I’m crushing HARD.