I draw myself with smearing wrists
unlifting and end up with three charcoal
mouths talking into each other, leaving
my body

to her own devices; counting the brown hair
on his forearm, counting the gray fuzz on
his puppy-tongue, wishing to dissolve
my identity in glitter and pseudonym, my mouths

smooch themselves which is to say I talk
about myself, which is to say I lie my name into
Scheherazade, he’s complicit in the telling
of my stories and he touches me through the
narrative, encouraging, how my first kiss was teeth
and queer angles, waking up with grass-stains and
cricks in my neck—what

is a boy but an excuse to linger in the mirror, and more
than that, an excuse to nail down the nebulous parts
of description; my eyes are x and then y, for every man
I am a different man, my body a different woman 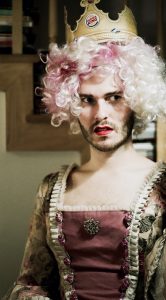 Mitchell King is a Witch and runaway Texan living in Kansas City. He was awarded the Jody Donahue Poetry Prize from Stony Brook Southampton in 2014, has published memoir in The Southampton Review, and has featured poetry with Matrix Magazine and The Red Cedar Review. He is currently working on his first collection while sweeping floors at a café in Kansas City and he hopes someday to colonize the moon. He can be found lurking about online at https://twitter.com/star_fag.