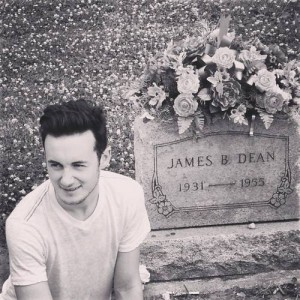 In October 2014, transgender novelist Elliott DeLine released his third work, Show Trans: A Nonfiction Novel. DeLine’s book is both confessional booth and road novel, both romance and tragedy, and both true and entirely made up. Interspersed with screenshots of his phone, Grindr hookup profiles, and selfies, DeLine’s work is an innovation in the field of transgender memoir.

DeLine’s writing career started in 2010 when he self-published his first novel, Refuse. This novel, about a transgender man named Dean living in Syracuse without a job or hope for the future, marked DeLine’s writing as predominantly about failure. Because of this focus on the negative side of transgender life, his work has often been ignored or rejected by some members in the queer community. This has not stopped DeLine. He has since produced a prequel to Refuse called “I Know Very Well How I Got My Name,” a short story in The Collection (Topside Press, 2012), and several articles in various publications. Talking about positive images or completely happy endings has never interested DeLine, but in Show Trans, DeLine has taken the dichotomies of true/false, positive/negative—even male/female—and completely blown them apart.

Transgender stories, as a genre, have depended on realism. The genre has consisted of mainly autobiographies told by transgender patients after they have received gender reassignment surgery. Christine Jorgensen’s text is one of the first of this kind, and Chaz Bono’s recent work in both film and print also echoes this commitment to realism. Photographs are another common medium taken up by transgender storytellers as a way to document and represent their transition. What these autobiographies and photonegatives represent is a way in which the transgender subject has taken back agency from the doctors who perform these surgeries—but also decide who is allowed to get them.

In the US and Canada, the process of obtaining the right to transition from one gender to another is long and arduous, often requiring the approval of at least two doctors. This constant viewing and sensationalizing of the transgender body and mind makes many transgender people feel powerless. In Second Skin, transgender theorist Jay Prosser notes that the transgender subject, in order to get what they want, must go through this medical gaze, but after they have passed through, it is utterly imperative that the transgender person tell their story. Trans people write, take selfies, and also flock to YouTube to post vlogs in order to have control over their own stories and bodies again.

DeLine has been through the typical transgender narrative himself. What makes Show Trans different from many of the other memoirs in this genre is that this is not a story about his surgeries or even his gender identity, but about how his body is perceived by others. Even if what’s on the surface finally matches what’s inside, DeLine does not seek complacency in his identity, but disruption. Though the people on Grindr consistently tell him he looks great “for a transgender person” (as if this is a new standard of measuring), DeLine refuses to take part in the dialogue by actively responding in jest. 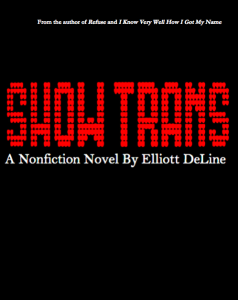 By calling himself a “show trans,” DeLine acknowledges the constructed nature of the transgender narrative—only success stories are seen to give trans people any merit, and he takes it to the next extreme. DeLine casts himself in the role of a show pony meant for display and actively refuses the role through ironic distance. Moreover, by calling his memoir Show Trans, he embraces his future in this role at the same time that he calls attention to its artifice.

Show Trans is a narrative that disrupts the standard surgery path of transgender people, while also calling attention to the difficulties of being sexual while trans. But this is also a story in which the protagonist (a thinly veiled stand-in for DeLine himself) desperately wants to change. Having just gotten out of a bad relationship with a former lover named Isaac, DeLine dates around in Syracuse to try to forget his woes, only to return to Isaac again in San Francisco. The tone and convictions of Deline’s prose never stay the same for very long, but sway like a pendulum. Staying still, for DeLine in this book, means becoming a fixed object that someone can put on display. After producing two books and many articles that have often been misinterpreted by the audience he wishes to reach, DeLine knows that danger all too well.

This book is filled with very Kerouac-like spontaneous rambling, and in many ways, this text feels to me like the queer, trans version of On The Road. The characters are real, but not real at the same time. DeLine calls his hybrid version of the fictitious truth a “non-fiction novel,” borrowing the term from Truman Capote’s In Cold Blood. Everything here happened, more or less, but the creative way DeLine weaves these scenes with past and present images, with commentary and photographs, makes no claim for truth at all. For me, DeLine is one of the best transgender writers out there right now simply because he does not confess with hope of redemption, but because he wishes to change the very nature of what constitutes truth itself.

By the end of his journey, DeLine is a changed person. I won’t spoil the ending or the many revelations that DeLine has along the way, but the purpose in this text is for DeLine to find multiple versions of himself while on the road, only to come home again to Syracuse, where he can be accepted and okay with what he has found.

At least, for now.

Show Trans can be purchased online at ElliottDeline.com.