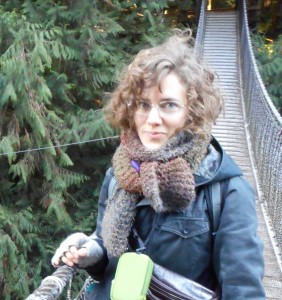 Plenitude Magazine has established a writing award for up and coming queer voices called the Emerging Writer Mentorship Award. The award alternates each year between poetry, fiction and creative non-fiction, and the recipient works with an established writer on a manuscript. In 2014, the award was for poetry, and the winner, Nat Marshik, had the opportunity to work with writer Arleen Paré, who recently won the Governor General’s Award for her latest work, Lake of Two Mountains. Nat and I talked about her writing process, what she does when she’s not writing, and what it’s like to get a phone call from Arleen Paré.

Where were you when you received the news that you won the Plenitude Emerging Writer Mentorship Award?

It’s a pretty safe bet that it was a cold and drizzly day in Vancouver, and that I was at Britannia library hunkered down at a computer. As a respectful library patron, I would have suppressed any squealing, but I’m sure an exclamation of some kind — appropriately hushed, of course — escaped my lips.

Had you published any writing prior to winning the award?

Not unless you count two melodramatic poems which appeared in an anthology of work by high school students. I’ve written a few newsy pieces for grassroots media, but Plenitude is the first publisher of my adult creative writing.

Inspiration often arrives at night, when I should be in bed but am instead bundled up with a cup of tea, a blank notepad, and a warm wool blanket. I also like cafes. The relentless tide of gentrification has “bestowed” a lot of little homespun cafes on East Vancouver, and even though I experience some guilt about how terribly hip and trendy they are, I get a lot of pleasure from writing at their wood tables, beside large windows.

What do you do when you aren’t writing?

I ferment a lot of cabbage. It’s cheaper than buying fresh veggies and way more fun to eat — you can put it on almost everything, except maybe dessert. I’m also a member of the Dundarave artists’ printmaking co-operative on Granville Island. Workwise, I’m under-employed, but indulging in visions of collective land projects that might include fuzzy ungulates, fresh milk, and glorious countryside queers.

What do you need to be able to settle down and write? Music, coffee, a cat?

I generally don’t turn on music while I’m writing a first draft — it makes it harder for me to sink into whatever emotion I’m trying to catch. On the other hand, if I’m editing something for the umpteenth time, a soundtrack of obnoxiously catchy pop songs sometimes keeps me from getting too groggy and stuck in the details. I always write on unlined paper and I get a little cranky without my favorite pen, the super fine-tipped Pilot G-Tec.

What was it like working with an established author like Arleen Paré, who just won the Governor General’s Award? Were you nervous?

I wasn’t familiar with Arleen’s work until I won the prize (I immediately headed to the library bookshelves to find her work). That spared me the extremes of awe and wonder, which I definitely would have felt had I already encountered her prize-winning collection, Lake of Two Mountains. Overall, I felt a lot of gratitude.

My first phone conversation with Arleen, as we sorted out how to structure the mentorship, left me giddy and laughing to my roommate, maybe even blinking tears a little — as if I had fallen suddenly in love. Having not only a poetry mentor, but a queer mentor, overwhelmed me with a kind of relief. In fact I ended up writing a poem about it, called “No elder.” Excuse me while I quote myself:

I had the honour of seeing you read at the Plenitude Issue 5 launch this year. Was that your first time reading your work aloud? Had you read anywhere else before?

I first read my work aloud at REVERB Queer Reading Series in Vancouver in 2013. The quarterly event, hosted by Leah Horlick and Esther McPhee at Gallery Gachet, was a great first opportunity — the room was packed and full of supportive murmurs and appreciative laughs. At last fall’s Plenitude fundraiser, I had a very special guest — my high school English teacher!

What has working so intensely on a manuscript taught you about your own writing?

I learned that I have a lot to write about, especially childhood. I’ve been held back sometimes by the thought that my childhood has been too privileged, too easy, too “normal” (whatever that is) to write about. Yet details and nuances of it kept surfacing unexpectedly in response to my writing prompts. I consider this a reminder that I can, actually, write what I know, and it doesn’t have to be as dramatic as the writing I did in high school.

How do you think you benefited most from this mentorship experience?

I wrote and wrote. Knowing that someone expects you to produce something made a huge difference. Arleen suggested that I try the poem-a-day challenge in April, after the mentorship had finished, with the promise that she would faithfully read every poem I sent her. That was fun! At the end of four months I had written more poetry than in my entire life before that.

I’d also really encourage any future recipients to spend some time at the beginning of your mentorship discussing your ideal structure and how you’d like to receive feedback. I didn’t have a manuscript in progress before the mentorship began, so I benefited a lot from the schedule we came up with to guide my writing over the three months. I sent Arleen four new poems in a single batch every two weeks; twice we met up in person. Arleen would arrive with print-outs of my poems and handwritten notes, and we’d go over them in detail, starting with her reading each poem aloud.

Arleen was excellent at giving feedback. She was sparing but incisive with her observations. Best of all, she wasn’t afraid to say, “Scrap this one” — so I knew I could trust her when she said “Yes” to a poem.

Matthew Walsh is currently studying Creative Writing in UBC’s MFA program. His work has been or will be featured in Arc, The Found Poetry Review, Carousel, Descant, Existere, Matrix, Carte Blanche, The Steel Chisel and as part of the Halifax Commons Poetry Anthology. His long poem “Cloud Grape” won the York University President’s Prize for poetry. He is also the recipient of the 2014 John Newlove Award for Poetry. He is currently a member of PRISM International’s editorial board.