Men yell at each other
at the fish market in Tokyo or so I’m told.
I want to be a respectable monger like them. Instead
I peddle analogies in which I am a whole catch
of Alaskan crabs, creatures
susceptible to sea sickness. I live on the floor
not in the waves. Meanwhile, men make money
throwing tuna around. I travelled
to Tokyo once. I ate eel and took pictures
of crowds in the street. It felt like a sea,
like you could drown pleasantly.
But I never got myself to that market.
Men with yesterday’s newspaper
buy the fresh dead. You have to wake
early, you have to line up. It has to be
the right season, but you will have
a whole day ahead of you if you go. I heard
it is exciting and I believe it. I heard
when Alaskan crabs are caught, the motion of the boat
makes them sick. When I went to Tokyo,
you wrote me an email that said
wow when you agree to get out of bed you really commit.
If one crab gets sick, it releases a chemical,
contagious as doubt. That’s what I’m selling.
The whole catch and a wish remain underwater
on the calm sea floor. Later you asked
if I slept through a night
& if I learned enough Japanese
to understand the price of fish. 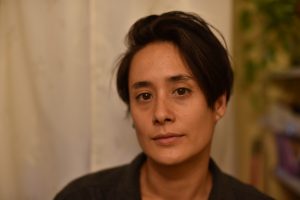 T. Liem’s writing has appeared in the Boston Review, Room Magazine, PRISM, Best Canadian Poetry 2018 and 2019, and elsewhere. Their debut collection, Obits., was nominated for the Lambda Literary Award in 2019 and won the Gerald Lampert Memorial Award for 2019. They live in Montreal, Tiotia:ke—unceded Haudenosaunee and Mohawk territories.