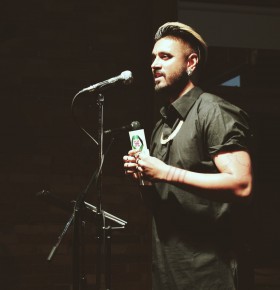 Even though I edit a lot during the writing process (a practice I strongly advise against when I am facilitating writing workshops #hypocrite), there are often chunks of a book draft that get chucked. This is because I am obsessed with efficiency in writing, where the math is always subtracting words versus adding them.

Editing typically involves reading and re-reading sections, often aloud, to gauge flow and create rhythm. I pose questions of the writing and try to listen: Does the text bore, bug or disappoint me? If so, why? Does it feel familiar, like something I have read or written before? Does it gracefully, passionately and efficiently convey what I am trying to say? Can I say it better? Despite being fond of editing, I can still be attached to my writing, especially when one sentence can take a day to craft. To help alleviate the fear when hitting DELETE, I keep a separate document where I paste all the omitted sections.

The section below,“Queer 1998,” was originally going to open my new novel, She of the Mountains, as a foundation upon which to build a bisexual love story. Unfortunately, I wasn’t able to make the voice in this piece match the other voices in the book, so this chapter never made it past the first draft.

It’s fascinating to look back at this two years later, and to recognize that a good beginning is most importantly one that ignites, one that drives you somewhere—perhaps somewhere unexpected. I am sharing “Queer 1998” to honour it for being this very kind of beginning.

In the nineties, we were queer.

We were queer but we didn’t know it.

I was eighteen and except for the pecks I had given Jenny-Marie Beston in Grade 2 under the park bench in exchange for fruit gummies, I had never had a real—full mouth, lasting for longer than five seconds—kiss.

I told you I didn’t know how to kiss and you leaned in.

Coming from a white girl in white Alberta, this intimate interest was the first time I thought being brown could have value outside of my family and religion. I taught you how to say Karnataka—the name of the state where my grandparents lived—correctly and laughed at your inability to roll your r’s and extend your a’s.

You taught me that there was hair product other than gel, that sex didn’t equal penetration, how to keep breathing when you choked me.

I liked being your doll, dressed in your sarong, your bracelets, your eye shadow. We wore matching black turtlenecks that I sometimes accessorized with your younger sister’s jean jacket, and together we brooded in the corner of work Christmas parties, at the Roost and at the Painting Daisies concert, gripping each other’s shoulders and wondering why no one would talk to us.

I want boys and girls to want me, I announced. You shrugged, as though I was stating the obvious.

You found the word queer somewhere in one of the lines of the non-assigned, giant textbooks that you read for pleasure. You said it was what we had been searching for, longing for: a box that wouldn’t limit us but rather, a box that was open by definition. You, a maybe-lesbian with a straight boyfriend and me, your recently-gay other boyfriend. Except we were too queer for words like boyfriend and girlfriend. We were too queer for queer.

We just said we were going with the flow.