I was five years old when I dreamed of snow for the first time, tucked into my bed in our hilltop apartment in Cloud View Tower, Kuala Lumpur, Malaysia.

In my dream, my mom, dad, and I had just emerged from an air-conditioned building into the street’s simmering heat. I was accustomed to the temperature shock—the weather stayed hot and humid year round in Malaysia, an eternal summer—but that didn’t mean that I liked it.

Parked along the curb of the busy intersection was a cherry-red sedan covered with a thick layer of pristine white snow. I stared for a long moment, breathless. The snow blanketed the car’s roof and hood and trunk and it had a radiance about it, a tranquility that made it glow even in air that shimmered with heat and exhaust from the honking cars that flew by.

I ran over and pressed both my palms into the snow on the car’s hood. It felt nothing like what I’d imagined snow would feel like: instead of soft and powdery, it felt rough and crystalline and a little crunchy. Marvelling, I squeezed the snow into my fists and raked my fingers through it, and in my hands, chunks of snow melted into slush and finally into cold water running down my wrists.

I turned to my parents, who stood watching me with smiles on their faces. “But how did this snow get here? It doesn’t snow in Malaysia. You can’t take a car on an airplane, can you?”

I frowned, thinking of the huge ocean that I knew separated America and Malaysia. Perhaps they’d built a bridge, spanning miles and miles of roiling water, so that people like the owner of this car could drive over with their snow and frost. It didn’t make sense, though, the more I thought about it. How had the snow not melted off the car on the way over?

Before I could open my mouth to ask my parents, I blinked into darkness. I startled for a moment, before feeling the soft bedsheets around me and recognizing the silhouettes of my stuffed animals across the room, limned in the gentle pre-dawn light.

I clambered to my knees and peered outside. We lived on the fourth floor of the apartment building, just high enough that my window overlooked the quivering treetops of the mountainside. The fronds of the palm trees standing sentry at the security gate waved in a sad howl of wind.

When Mom and I stepped out of Vancouver International Airport for the first time, I noticed right away how different it smelled. I hadn’t realized that Malaysia had a smell. But I knew it wasn’t this. No smoke, no smog, no hissing steam from street food vendors on the side of the road.

The air in Vancouver smelled like crisp pine and freshly turned earth. Still, but not heavy. Even in the musty old basement we moved into, underneath a small one-storey house built in the 1960’s on Ontario Street, there was a cleanness to the air. I still hated the spiders—the big, black spiders that crawled in every corner. In Malaysia, we just had cockroaches and the occasional lizard.

Mom brought me to Sir William Van Horne Elementary School the next day to enroll me in Grade One. Everyone else had started school weeks ago. They plopped me in the middle of Division 15—Miss Lake’s class.

I had never gone to a real school before—my mom homeschooled me for the past four years. When the bell rang for recess (it sounded more like a foghorn than the fire-alarm shrill I heard in American movies), I thought it signalled lunchtime. I ate the dumplings Mom had packed for me in the containers she’d bought at Safeway. The containers had red snaps on the sides and fruit prints on the lids. I thought they looked kind of granny-esque, and I wished she’d used regular Ziploc tupperwares instead.

In the confusion after the final bell rang, with all the kids bowling over each other to grab their backpacks and jackets from the coatroom, I left my Safeway containers behind. When we got home and found the containers missing from my backpack, Mom berated me for it and made me walk tearfully back to Van Horne to retrieve them.

At school, I learned that everyone loved Bill Nye the Science Guy and that we always cheered about no homework, even though I secretly loved worksheets, and that I had nothing in common with the other kids. Tyler and Jack were best friends, as were Julia and Kristin, but everyone seemed to have grown up together.

They played games I’d never heard of, like groundhog and freeze tag and, bizarrely, toilet tag. I didn’t understand when I could unfreeze in freeze tag and I didn’t run fast enough to beat It and I didn’t get why something boiled red and angry in my chest every time the other kids pointed at me and screamed, “You’re It!” before running in the opposite direction, holding hands and howling with laughter.

As the weeks passed, the air turned frigid and the leaves dropped off the trees, leaving them naked and shivering in the cold. In our little basement, it grew so chilly that I stood in the shower long after I’d turned off the water just so I wouldn’t have to step out of the steam wet and cold. I made Mom warm my clothes on the heater by our bed every morning before I changed into them.

Mom took me to the Bay to buy me a turquoise ski jacket, brown snow pants, black snow boots, blue mittens, and fuzzy Hello Kitty earmuffs. The morning of the first snowfall, I ran outside into the still-drifting snow in my teddy-bear slippers. A full foot of snow blanketed the backyard, so bright and white that my eyes ached looking at it.

I bent over and scooped up some of the snow to form a snowball. “Mom!” I cried. “Mom, look!”

Mom appeared in the doorway, squinting. “What are you doing? Come back here and put on your jacket and boots!”

I brandished two handfuls of snow at her. Rough, crystalline, crunchy. “It feels exactly like my dream, Mom! When I dreamed of snow in Malaysia!”

Mom smiled, cocking a hip to lean against the doorframe. “Really? That’s nice.”

I shook my head. She didn’t understand. I turned my face up toward the overcast sky. Big, translucent flakes landed like frozen feathers on my cheeks.

I smiled, small and private, to the snow, to the sky, to whoever was watching. 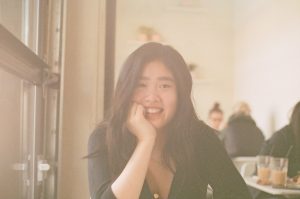 Grace Kwan is a Sociology and Professional Writing & Communication student at the University of Toronto. She has written stories ever since she was seven—her works have appeared in multiple anthologies and magazines. She writes on sociopolitical topics as a contributing writer for The Thirlby. In her free time, Grace binges sitcoms and DnD campaigns online.