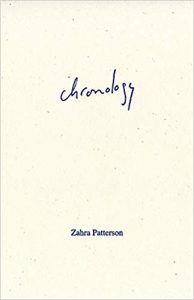 Not by accident, Zahra Patterson grants us entry into her long-form nonfiction essay, Chronology, through failure. The action of the book centers around Patterson’s inability to translate a short story from Sesotho, the language of Lesotho, into English. Incidentally, Lesotho is a fully sovereign state within the borders of South Africa. The author’s failed attempt to translate the story into English brings up her own struggle with identity and privilege, set against the violent backdrop of colonial white Anglo-Saxon Protestant language. Patterson communicates the painful frustration of her experience by making language itself the plot and the protagonist, trying to return to this living organism some of the life English has stolen from it–no easy task given that she is attempting to do so in English. Depending on your personal experience, you may tune into this familiar indignity. To me it underscores the whole essay.

Like the book itself, Patterson’s prose is experimental: she uses letters to form syllables designed to contain sounds that break up the unilingual Anglo neuropathways, touching at linguistic roots she is both connected to and disconnected from. This tenuousness comes alive in her simultaneous proximity to and distance from motherland and thus, self. From this place across the rift, on the other side of exile, she transcribes familiar sounds with broken syntax, mixing up the cadences of these arrangements of symbols on a page. Patterson’s technique breaks some of English’s dehumanizing limitations, expressing the colonial dislocation of meaning by fracturing actual words, like this:

One of the first reactions of the European explorers and colonists, on being confrontedb y a world that was wholly novel and outside the bounds of their experience, was to reorder it according to their existing structure ofk nowledge. This entailedi mposingt heir intellectualg rid on the unfamiliar masso f detailt hat surroundedt hem. Linguistica nd otherb ordersa nd boundariesw ere erectedi n ordert o resctructuret he Africanw orld in a way thatw ould make it more comprehensiblet o Europeans.

Patterson’s book creates a space frankly nonexistent in the English-language canon. In a passage where Patterson is in a library to consult a set of dictionaries to aid her Sesotho-to-English translation, she finds that it’s a one-way dictionary for English speakers only. There’s no Sesotho into English section. In this one-way-ness English goes into the languages it’s colonizing while they aren’t welcome into English. The profound impoverishment that English inflicts on its non-native speakers, individually as well as culturally and historically through colonization and linguicide, comes through powerfully in Chronology. Readers interested in the subtle mysteries of language and the differences between oral and written versions of language might take this one-way-ness as a hint at the limitations that English has imposed on itself so to speak, having been the colonizing language of so many indigenous peoples, including its own. Chronology creates the space for readers to consider what the English-language canon could become if we changed the directional flow. I honestly don’t have the words to qualify the greatness of this feat. I just want to say thank you. How do you say it in Sesotho? I have no idea.

The form of Chronology feels strong and deep and very real. It’s a story about moments containing unfixed experiences, organized through memories, emails, notes, artifacts, souvenirs, pieces of pieces of pieces of lives lived. These are some of the modes through which Patterson communicates the grief of losing or being disconnected from one’s mother tongue, and how this experience infuses every word, thought, breath, eventually altering the self no matter one’s efforts to resist acquiescing to it. In Chronology, the story of a failed translation actually expresses the ineffable quality of exile, how it might feel.

The awkwardness Patterson experiences in terms of relating to Sesotho culture, makes her seem both sympathetic and relatively white, which feels like an authentic place to position herself. There is a grace in her execution. If I had to criticize anything, it’s that I would have liked to know more about how this relational anxiety looks inside her mind, and in other aspects of her life beyond the translation. What negotiations does Patterson make with herself on a daily basis? With others? In her work? I would have liked more depth in that regard but this by no means negates the fact that Patterson does explore this, for example when she asks herself,

What is my function? I am not mere bystander critiquing orthographic politics and the violent gift of literacy. I am a writer. A speaker of English. I am not a translator or a speaker of Sesotho. What right do I have to embark on this project? An emotional pang—is that a right?

This provides an example of the sometimes academic yet authentic world in which Chronology seems to exist, floating back and forth between South Africa, Lesotho and the U.S., tracked mostly through emails spanning a few years since the first one is sent by Liepollo Rantekoa. Multiplicity and non-linearity are the default in Patterson’s book. She achieves this in the way she writes about her actual, tactile experiences with translation and the cultures contained inside this interplay that is inextricably rooted in annihilation and brutality. Her humble, passionate account builds into a longform essay that itself embodies the unmoored, unsayable experience of home and exile as carried through language. Patterson’s nuanced telling of her struggle to connect with Sesotho feels extremely fresh and real, like 3D, which is no failure at all. 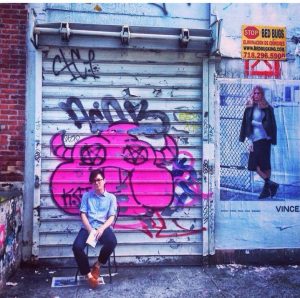