they fumbled through the office door, always late, always elbowing each other as they rush-brushed their teeth before they plopped in the chair. a boy and his older sister, who was the moon to his moving car: always behind, same angle, same distance. emily would have picked the rainbow choker from the prize basket too, thought the dentist. but he was only guessing.

she was the kind of teenager who grinned with her whole mouth even though braces clumsied her face, the kind people trusted to lend out her brightness. but the dentist knew that she couldn’t have clamped her lips shut even if she wanted to—her teeth were too wide, her overbite too severe. and when he angled a mirror against her palette, her tongue flinched away from the quiet.

on the eighth anniversary of emily’s accident, which she couldn’t have known, she gleamed into the chair, stretched floss to the horrible light and said: look, isn’t it like spider thread? said, my uncle actually fixes wetsuits with this stuff, you know. isn’t that wild? that dental floss can mend something torn up by the ocean? the dentist couldn’t thank her, so he undid his mask and said keep up the good work with your brushing. he took the string she’d dropped home with him. wrapped it around his finger, just tight enough for the nail to blink: pink, white. pink.

winter break from her first year of college. somehow tan. she was in love, thought the dentist, but he snapped on his gloves and kept his hands busy. he figured she’d tell him in her own time. jaw propped wide, just a little wider, she didn’t. her eyes flickered with the leaning light.

new stains on her teeth. shallow breaths splitting under her bib.

there was a new first name on file, but the dentist knew these teeth. little calcified crescents, the wisdom teeth they’d decided to keep. pearl chests, burrowed deep. at the end of the appointment they shook hands, and they sauntered out, their little brother lilting in their steps, emily jutting out from their shoulders. their mouth still, always, too full of smile to close. they and them are the right pronouns, thought the dentist, for a soul reassembled, slice by slice.

on the dentist’s last day, the hygienists rhymed floss with boss in a poem composed mostly of giggles. they cluttered on armrests, forkless, their plates drooping with cake. thick slices of carrot and almost-white icing. he smiled, steady, without teeth as he always did. the lack of raisins is proof, he thought, that to know towards someone is to define through negation.

then the dentist bought himself a departure, and midair, mid-breath, he refracted. and when he landed, he didn’t start looking. he trusted the old shards would find their way back. 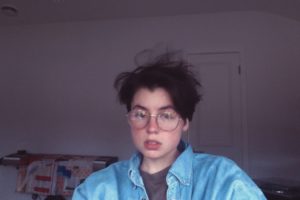 emilie kneifel is a sick fish, goo fish, they fish, blue fish (critic, poet, editor, and co-creator of PLAYD8s). find ’em at emiliekneifel.com, @emiliekneifel, and in Tiohtiáke, hopping and hoping.