Everything came back to me,
in snippets, later, after the smell of his cologne
on a stranger wafted through the doors of a bus
and the details swept
into me like dirt maltreated by a broom—
his hands on me, his eyes seeing my fear
and ignoring it, his voice telling me
to stay still, the things I learned to label
trauma. That was remembering.

Forgetting in the first place wasn’t
clear-cut, not the brain scissoring
an automatic line between this happened
and this couldn’t. Four days after
he’d held me like he did,
I sat in the passenger seat of your car
wrapped in December and idling,  and I couldn’t separate this happened and this
didn’t. I told you some of what happened,
working through my body that old metaphor of rewriting
history: I asked for it,
he was just excited to see me, he didn’t mean
to hurt me, he didn’t hurt me, I love him, he’s the only one
who’ll ever love me. I don’t know
how you let me say those things
beside you. I’m sorry
I didn’t value friendship enough then to know
how much your love knew I was too good
for the story I revised, making excuses
and mechanisms for moving on. That willed
forgetfulness never meant to include you.
All the time you spent remembering that night
when you parked your car in the icy parking lot
of our old high school and let me circle
around the truth of that first boyfriend you tried to like,
at first, for my sake. It’s funny how unsuccessful
love can be, how easy it is to hate
on behalf of someone else: you’ve told me these things
as if, they, too, were secrets. You could not drive me home
to my parents’ place because my mother had phoned you,
you knew he was waiting in the cul de sac, ready to
plead his way into
me again. Instead, you idled
your vehicle in that parking lot, let me open the car’s
door like a wing and fly some of my panic away,
run in circles around you, around the clouds pouring out
of the exhaust pipe. The way it must have felt
to watch me appear and disappear
through the windshield slowly frosting over,
again, with your breath. 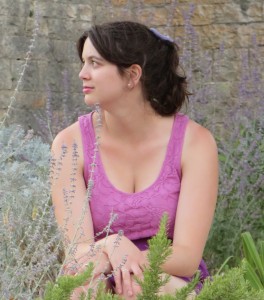 Ruth Daniell was named the winner of the 2014 Young Buck Poetry Prize by Contemporary Verse 2 and is a current nominee for the Pushcart Prize for poetry published in One Throne Magazine. Originally from Prince George, BC, she now lives in Vancouver, where she teaches speech arts and writing at the Bolton Academy of Spoken Arts and runs Swoon, a literary reading series on love and desire that she founded in 2013. Her poems and stories have appeared or are forthcoming in various journals across North America and online.