I’m in the chapel on the Titanic but
it’s modern and kind of tacky.

The ceilings are twenty feet high.
There are huge dark panels on the walls
where stained glass windows should be.
When you walk past them, you can see in, see
three-dimensional representations
of the saints.

I remember a wine-coloured robe.
The framing on the panels is faux
gold metal.

I’m having sex with a guy. Heavy. Black hair.
Blunt nose. Acne scars on his face. I think
he’s hot and he’s going to fuck me.
I have an image of my asshole.

I want him to use a condom. I won’t let him
fuck me without a condom even though
we’re on the Titanic and I know exactly
what’s going to happen. 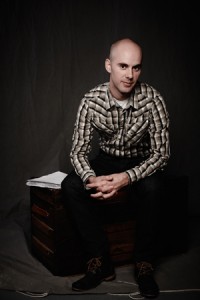 Michael V. Smith is a writer, performer and filmmaker who teaches in the interdisciplinary faculty of Creative and Critical Studies at the University of British Columbia in the Okanagan Valley. Winner of the Dayne Ogilvie Prize for Emerging LGBT Writers in Canada, his most recent book is Progress, published by Cormorant Books. A memoir of his escape from masculinity, My Body Is Yours, will be published by Arsenal Pulp Press in May 2015.