Seasons have changed,
even if doubts haven’t. Up north

we’re together in the final blue curl
of daylight, watching each iteration
of trees out the window, their latest bit,
that wild dead orange. It’s cold

and I feel calmer in my clothes.
I’m answering the call of old
books, thumbing through
their homely congregations of paper.
Out of fashion. Jacsen is upstairs;

he’s cutting his hair.
He’s watching for the moment
when the trees cease being trees.
He’s alive in his own story
and that story is not a book.
Books have ceased being books.

How even the body, when given
enough time, can miss itself
into becoming a different body.

We know this is true, how he was
once a girl on the shores of Lake Michigan
and I was similarly a thief
of my father’s pressed shirts.

Funny how when it’s us, we can’t see it coming
and years later, if asked,
it will be hard to know what changed,
exactly.

I grew a beard, I might say.
I wore tighter pants. 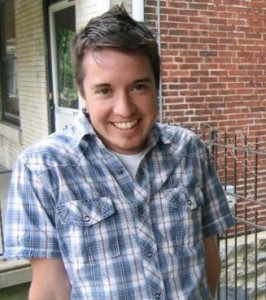 Nico Amador is a writer, educator, and community organizer. His work has appeared in Poet Lore, APIARY Magazine, Original Plumbing, MiPOesias and is forthcoming in Joto: An Anthology of Queer Chicano/a Poetry. He is also the co-editor of Thread Makes Blanket Press and member of the Rogue Writing Workshop in Philadelphia.