Thank you to everyone who submitted to the Emerging Writer Mentorship Award. We received many fantastic stories. The judge for this shortlist was Alex Leslie, and the winning piece will be selected by Shani Mootoo and announced next week.

Congratulations to these three finalists!

Lukas Bhandar — “The Roots of Echoes”

Growing up in a small town, Gabe is stuck in the block between home and school and in the pages of his spiral-bound notebook. The story contains the beginnings of Gabe’s exploration of his gender identity and leaves the reader wanting more. This is thoughtful, sensitive writing, touching on Gabe’s dreamlife, his writing and the questions others ask of him that he cannot yet answer.

Lukas Bhandar is a queer and non-binary artist and writer currently located in Victoria, BC, on the unceded territories of the Lekwungen and WSÁNEĆ peoples (specifically the Kosampson people). Their work has appeared in compendiums of insurrectionary erotica, rejection letters from the New York Times, and on their website, lukasbhandar.com. 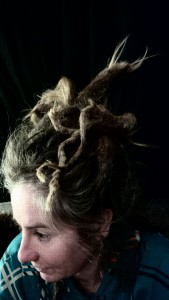 A girl’s childhood and growing up play out against the traces of sorrow in her grandmother’s stories of the Holocaust. The writing resists sentimentality by focusing on the smallest details of experience — the memories passed down that live on in the rooms we share with our families.

Sasha Boczkowski holds an honours degree in Humanities from Carleton University.  Her work has appeared in Descant magazine and the Newfoundland Quarterly. Last year she was the winner of the Writer’s Alliance of Newfoundland and Labrador’s postcard story award. She lives in St John’s.

A compelling monologue in the hoarse, brassy tones of an aging drag queen directly addressing her queer “children.” She recalls her glory/trashy days at the House of Belmont, a club in Saint John. A confident piece of writing that takes the risk of total flamboyance.

Llew Forestell is a PhD student in the English Department at the University of Calgary studying creative writing and the problem of effeminacy in gay male literature. His creative work has been published in Plenitude Magazine, and has been nominated for the Journey Prize.

Alex Leslie has published a collection of stories People Who Disappear (Freehand) shortlisted for a 2013 Lambda Award, a chapbook of microfictions 20 Objects for the New World (Nomados) and a collection of prose poems The things I heard about you (Nightwood, blewointment editions, 2014). Their poetry is included in Best Canadian Poetry In English 2014 (Tightrope Books) and they were the fiction reader for Lemon Hound 2013-2015. Alex edited the Queer issue of Poetry Is Dead magazine. They are currently working on a collection of stories entitled We All Have To Eat, and they live outside Vancouver.