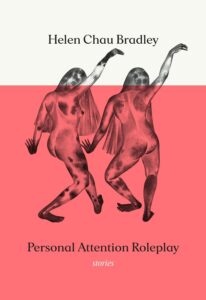 Helen Chau Bradley’s fiction debut Personal Attention Roleplay opens with the line, “I first fell in love with a girl to the theme song of Top Gun.” The story, titled “Maverick,” is the first in an intimate collection of ten short stories exploring the intersection of queer and Asian identity. It sets the tone for the rest of the book—one of longing for connection, misfits in love, and the tumultuous in-between time when we are no longer little children, but not quite full-fledged adults.

In “Maverick,” we are introduced to awkward pre-teen Hannah who finds herself falling for fellow gymnast Larisa. Told in pitch-perfect, first-person prose, we are drawn into Hannah’s experience of infatuation, of attraction, of uncertainty; the highs of first sparks for another person; and the lows when they burn out. Through sensory memories like the “tangy and sweet” smell of Larisa’s hair, the feel of lycra leotards touching, the 1996 Olympics on TV and, of course, the music from Top Gun on cassette tape, to which Larisa’s floor routine is choreographed, Chau Bradley vividly conjures the roller coaster ride of queer desire awakening.

“Maverick” is followed by the titular “Personal Attention Roleplay” which deftly shifts into second-person narrative, effectively putting the reader at the heart of the relationship between Justine (you) and her roommate, Jasmine. When Jasmine starts pulling away from a friendship that she believes has become too co-dependent, Justine finds solace in an ASMR channel: “Her whispered inflection is unfamiliar, but there’s something, a slight lisp to her voice that pulls Jasmine’s absence towards you… Missing her comes upon you now, unfurling, swallowing your week-long attempt at detachment.” Justine’s terror of solitude and resulting transference of dependence onto YukiASMR leads her to dangerous extremes, with her desperate need for attention, ironically, resulting in deeper isolation.

Isolation returns as a theme throughout the book, most notably in the Black Mirror-esque “New Horizons,” where a mixed-race Asian-Canadian woman undergoes a surgical procedure promising to “make your best half whole”—altering the face she has considered ugly for so long, changing it into a fully Caucasian face at last. She gets what she has always wanted, but it is happiness tinged with horror; the fulfillment of a dream that leaves her hollow. Similarly, in “Only the Lonely,” a woman deals with casual racism and precarious work while in the throes of an intense relationship with anarchist/activist/anti-capitalist “V.” Although they share community, circles of friends, and physical connection, the relationship is ultimately doomed to failure, leaving the story’s main character alone and reckless in the turmoil of her heartbreak. The story ends as she throws herself into the midst of a protest in downtown Montreal, saying: “… and there’s no turning back, nothing to do but link arms again, yell ‘UN-DEUX-TROIS-GO,’ and run forward as hard as we can.” It is not the happy ending she hoped for, but she is still part of something, still screaming, still searching for where she belongs. Both stories give us poignant portrayals of isolation, even within romantic relationships, family, or community, and the intensity of emotion that so thoroughly colours being young and queer and uncomfortable in our own skin.

All of Chau Bradley’s characters in this collection are seeking out connections, while also navigating complicated processes of self-discovery. The last story in particular, titled “Soft Shoulder,” brings these elements together as we follow a queer rock band on tour. When past and present traumas threaten to tear the group apart, they face difficult choices about how to move forward in the face of hard truths about each other and the price of protecting the people they love. “Soft Shoulder” offers a sharply observed story about female friendship, queer community, and the ways women keep each other safe, ending the book on a note of solidarity and hope.

The only story in the collection that seems somewhat out of place is “Sheila.” Told from the perspective of May, a young mother just trying to get by, the story moves between May’s memory of her old friend Sheila, the only other Chinese kid at their mostly white school whose dreams seemed to come true so easily; and her hopes for her own daughter and the life she dreams of building that is always out of reach. The split focus of the story leads to a bit of a disconnect from the characters and the abrupt ending makes for an unfinished feel.

When we think of pilgrimage, the images conjured are of seekers, people on a journey to a foreign place. These pilgrims are often seeking something specific, whether it be a blessing, a way to find meaning, or a path to transformation. In “Finisterre,” a stand-out story in the collection, we meet backpacking cousins Jules and Lauren, who find themselves on a literal pilgrimage, following the Camino de Santiago, a medieval pilgrimage route in Spain. For newly “out” Jules, the trip is a chance to find out who she is, away from the expectations of her family in Canada, while for confident cis-het Lauren, who has been told she is “hot for an Asian,” the pilgrimage tests her sense of self, causing her to question who she is in the absence of other people’s definitions. The pilgrimage ends at Finisterre, which translates to “end of the earth,” with Jules and Lauren huddled together, at the end of one journey, and the beginning of something new. In this moment, Lauren says, “…I get a little sad, the way you do when it’s the last of something. The last song of the night, the last kiss, the last time you’ll ever feel this specific way.” It’s a fitting image to encapsulate this slightly sparse collection, where the simplicity of the language belies the complexity of the characters and their quests to carve out space for queer desire and intersectional identity. All of Chau Bradley’s characters seem like pilgrims of a sort, all in search of something, all at the edges of their worlds, trying and failing and trying again to connect, to transform, and to find grace in the spaces in-between. 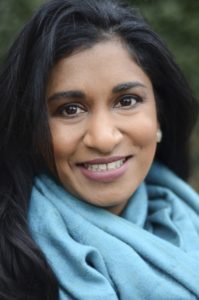 Anuja Varghese (she/her) is a QWOC Pushcart-nominated writer based in Hamilton, ON. Her work appears in Hobart, The Fiddlehead, The Malahat Review, Plenitude Magazine, Humber Literary Review, and others. She recently completed a collection of short stories and is at work on a debut novel while pursuing a Creative Writing Certificate from the University of Toronto. Anuja is also a professional grant writer and editor, and in 2021, took on the role of Fiction Editor with The Puritan. Find Anuja on Twitter (@Anuja_V), Instagram (@anuja_v) or through her website (www.anujavarghese.com).