and i’ve killed my tomatoes. their long arms crack,
despite the butchness of my shoulders.

they insist on death with unrelenting life.
my girlfriend and i are gay on main street,

in the vintage shop where i bought my first men’s shirt,
the one i wore to my second pride, when i blacked out

in a west end port-o-potty. my girlfriend and i
are size xl on main street, scandalizing god.

a mating dance among the hawaiian shirts,
yellow as tomato flowers. they are called perfect flowers,

because they contain male and female parts.
my girlfriend and i are honeybees on main street,

and a woman in a land rover attempts to run us down
with her tiny dog in the front seat, eyes like two pits of hades.

we self-pollinate, and the yuppies on main street are jealous,
and yet i would die to be touched in this wreckage.

a hairless cat understands us from across the street,
his eyes like the theme to taxi driver. rivulets of golden hours

and those little white butterflies in the remains.
our province is burning. i am in love. main street hates us.

and even so, each time i dive headfirst in life,
i come up emerald and everlasting. 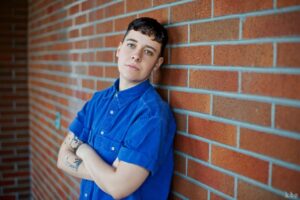 kitchen mckeown is a transmasculine nonbinary writer living on the unceded territories of the Squamish, Musqueam, and Tsleil-Waututh Nations. They are currently pursuing a Master of Publishing degree at Simon Fraser University and have a BFA in Creative Writing from the University of British Columbia. where they won the George McWhirter Prize of Poetry in 2020. Their poems have appeared or are forthcoming in Poetry Magazine, Room, Peach Mag, Poetry is Dead, The Puritan, and Bad Nudes. Their debut chapbook, I NEED NOT BE GOOD, was published by Rahila’s Ghost Press in February 2022. They can be found on Instagram at @tendr.bttns.