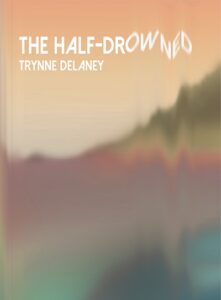 Near the end of Trynne Delaney’s first book, the half-drowned, comes a thematic question: What reality might hit after the end of belonging? The speculative fiction novella is set in a liminal future-scape inhabited by tenacious Black survivors on the Bay of Fundy. It invites readers into presence with multiple realities, considers the meaning of belonging, and journeys through poetic conceptual portals.

The Bay of Fundy has the greatest tidal change in the world, with movement over five kilometres and at low tide uncovering expanses of ocean materials. Each character in this setting, at an indeterminate future point of significant ecological degradation, connects to the shore for salvaging. They locate material treasure bits among mounds of detritus from humans’ generations of leavings. At the same time, they salvage opportunity to connect with alternate forms of life present underwater which can’t be experienced the same way on land. One of these life forms washes up on shore as a miracle baby, a try from non-human beings to make contact, and human settlement dwellers end up adopting the infant. Efforts to retrieve, exhume or rescue valuable artifacts, and relational knowledge, recur through the text.

The major characters LaVon, Harbour, and Maya are queer; in this future, they are not required to conform to hetero-normative conventions. Each settlement resident carries on in their own ways, and the only concerns regarding intimate liaisons are whether community members can stay decent to each other, so as not to fracture the mutual reliance needed for survival. LaVon has been in a multi-gendered triad, and his slightly younger sister Harbour hasn’t let go of loving Kaya. Kaya grew up alongside her and at the cusp of adulthood they open to a potent partnering, but she feels too unrooted as the one of ocean-delivered origins to carry onward to nesting with Harbour.

Early in the novella, Harbour is preparing to undergo Rites, a coming-of-age ritual when around eighteen to initiate community members into metaphysical linkage with their lineage. Tension threads through the book regarding who or what to accept as family, and the challenges of keeping in right relation with their kin. Harbour is trying to understand what happened to LaVon since his Rites a couple years before, what he may have learned that seems to distance them now. Though community members value her gift of song, and welcome her to share as part of weekly musical gatherings, Kaya is contending with the limits of her belonging there. This keeps her from the bond of doing the Rites, but it also sends her seeking answers that go beyond what can be provided by those with whom she lives most closely.

The narrative developments occur over the course of one season, but context is added with flashbacks. Just after Harbour passes through the Rites, this lands for her: “There’s nothing else out there…. She’s always lived here, only wanted what could make this presence sweet. She sets her feet surely, lets go of desire for it to grow sweeter and opens to wholeness.” While the pain of loss runs through daily existence here, Harbour’s recognition that she can find a sense of wholeness by accepting what currently is, signals her capacity to find anchor.

LaVon, on the other hand, has been stretched by grief. He is able to recall their mother’s death from a seasonal rise of illness the community is susceptible to, and is also facing the more recent loss of his cherished triad partners too. Delaney delivers the emotional power of LaVon’s sweetness of time together with these loved ones having dandelion wine outdoors, and the ache of recalling intimate moments of ease in dear company. LaVon too lets go of desire for things to grow sweeter, but he slips into the ocean rather than rooting himself in the community—a vulnerable turn as the waters have become corrosive and swimming pulls his body-mind closer to half-drowned, while his skin shows an unhealthy condition.

The title the half-drowned evokes a sense of continuing on with potentially fatal damage while not vanishing: a condition for the Black survivors who remain in this ecologically and virally restrictive environment, and perhaps for some categories of ancestral knowledge and feelings themselves. All figures in the book, including non-human entities, contend with the question of how to keep living, not dissociating but integrating with the available elements of the ecosystem around them, as trauma pervades.

Tension heightens as it becomes unclear how LaVon, Harbour, Kaya, and their community will go on in their encounters with encroaching alien life. A delirious style rises, narration grows more surreal: “Not many believe aliens have the concepts of joy embedded in their semi-robotic codes…. Your trust makes it want to like LaVon, even if like shouldn’t be in its code. You, it, I, we change”—who is surrendering, who has agency? Does this alien life, with a mission to penetrate and adapt the local habitat, perhaps have its own desire for change and to not colonize? The story is conveyed through dream consciousness, a mind-bending reckoning with what healing could be. The haunting ride is worth it, yielding meditations about individual life and death in relationship to group dynamics, and new ways to think of our humanity at the point of transition from “singularity, into dispersal.” 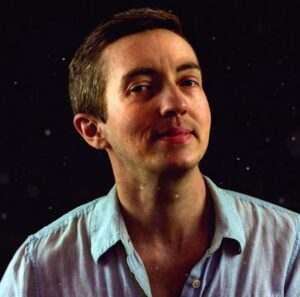 seeley quest is a trans disabled environmentalist in Halifax working in literary and body-based composition, curation and facilitation. Presenting in the San Francisco Bay Area 2001-14, sie’s toured the US. Hir play “Crooked” is in At the Intersection of Disability and Drama, and first game narrative debuted in Canada’s National AccessAbility Week 2020. Sie led a 2021 Quebec Writers’ Federation disabled writers’ workshop, and has published in Canadian Theatre Review, Briarpatch, Wordgathering, Fiction International, Them: a Trans Lit Journal, and more. Sie’s not on social media; find more at https://questletters.net