The world was a gala in its first pair
of high-heeled shoes. A spin of sweat
softball hair and twenty-year-old tuxedos.
Miraculous older couples who appeared
once a year. The world was two hundred lesbians
in a rented hall and we were our first
pair of shoes and this night was a promise
to her girlfriend not to kiss me. So we spun.
If I was the world the world was cleavage
and mascara, everything shiny with dancing.
Her gaze skidded across me, trying not to land.
Nowhere was safe, her eyes said. She looked at me
and dropped her drink at my feet.
What was it like, then, the breaking?
Shards of party plastic shattered bright as exaltation
around my velvet thrift-store heels. The world
was a necklace for my feet. It ruptured sudden
as worship. It smashed like praise
against the hardwood floor, breaking bubble
by bubble like champagne or happiness
or everything that was possible if we only
had a way to open it.

I don’t remember the argument,
only the empty glass in her hand.
Translucent. Hexagonal.
One of a department store set
of six. Eight? I don’t remember
what I said, only how fast her arm
wound up behind her in that narrow
basement suite. Only how far between
the glass and my cheekbone.
I can’t remember if the set
had been whole when we met,
or whether I’d yet seen this anger.
What was it like, then, the breaking?
It came at my face like a corner
I wasn’t going to make. Trajectory
plus or minus a few finger widths of flinch.
And when she held back, that last second,
her hand closed around only the glass.
The breaking already beyond reach.
Unbelted and hurtling. It lived,
after that, in the distance between us.
A few inches ahead of her hand
when she reached for me.

Was it my refusal to yell back?
The cranberry colour of the juice?
The used carpet we’d just bought
for our new top-floor apartment?
Was it the steady hand with which
I emptied my glass on her shirt
before walking away to the kitchen?
Halfway across the black and white
tiles, I turned. She was coming at me
fast. I froze, felt myself drop the glass
at my feet. Was that all I had left
of running? She pushed me down
into the broken glass, the glass
that had been whole in my hands,
the glass I had scrubbed clean in the sink
a hundred times. Held me
there, two hands at my throat.
What was it like, then, the breaking?
Those few moments before I realized
she wasn’t choking me. You’re
hurting me, I said, which meant
I could breathe. Broken glass
like a highway, like everything I couldn’t see
without rolling my face into it.

Look what you’ve done now, she said
as the cops pounded at the door.
It was sometime in those last few months.
I learned from her to wash glasses
with a sponge, not a brush.
How much dinner was too much
dinner. Which threats I could ignore.
She wasn’t going to beat the crap out of me
that morning, no matter how loud
she yelled it or how many times.
What was it like, then, the breaking?
Harder than it looked. I locked myself
in the bedroom. I had to throw that last glass
twice against the bedroom wall. Even so,
it was barely broken. I could have
glued it back together. Could have sipped
carefully from one side. I bashed
the wicker hamper again and again against
the floor until my knuckles bled
and broke only the handle. My world
was not built of bone china or eggs
by the dozen in soft cardboard.
It can take years before a thing will agree
to stay broken. 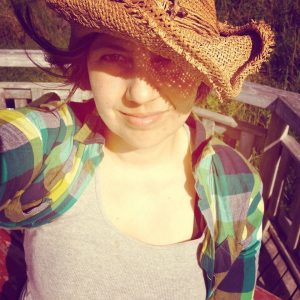 Anna Swanson is a writer and librarian living in St. John’s, NL. She studied creative writing at the University of Victoria, the Memorial University of Newfoundland, and the Banff Centre for the Arts. Her first book of poetry, The Nights Also, won a Lambda Literary Award and the Gerald Lampert Award. Her writing has also appeared in various anthologies, including In Fine Form: The Canadian Book of Form Poetry (Caitlin, 2016), Making Room: Forty Years of Room Magazine (forthcoming, 2016), Alive at the Center: Contemporary Poems from the Pacific Northwest (Ooligan Press, 2013), The Best Canadian Poetry in English (Tightrope Books, 2009), and Torah: A Woman’s Commentary (URJ Press, 2007).