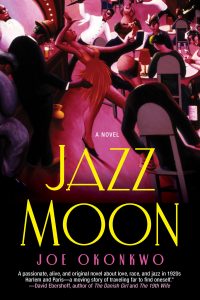 Joe Okonkwo’s lyrical, sensual, and sensory debut novel Jazz Moon is an intimate look into twenty-one-year-old Benjamin Charles’s timid yet determined metamorphosis into a man bold enough to honour his deepest desires. Readers watch as he reluctantly reconciles himself with “this thing” that haunts him from the first glimpse of a peer’s bare, muscular back in Dogwood, Georgia, to the moment he lays his eyes on trumpeter Baby Back Johnston in the haze of a bopping jazz club in 1920s-era Harlem, New York.

Okonkwo’s narrative masterfully weaves his familiar characters into the same realm as jazz great Louis Armstrong and Parisian starlet Josephine Baker, allowing them to become as real as these historical icons. His skill in animating and breathing life into every individual from the main characters to vague personalities who only appear in passing is refreshing. It’s hard not to thoughtfully linger on the strangers in the street who help to build a world that is rich with zest and full of essence.

The main characters, though, shine by getting a chance to exhibit their nuances and idiosyncrasies. They are thoughtfully crafted and layered. Take Angeline, Ben’s wife, who is both innocent and calculating: Okonkwo gets readers to both feel sorry for her and curl their lip at her behaviour. Or Baby Back, the “negro Adonis,” who is arrogant, desperately ambitious, and endlessly braggadocious yet irresistibly charming and undeniably likeable.

Though so many other parts of the story stand out, it’s really Ben’s world. He is a kaleidoscope of competing identities. He works as a waiter but spends his free time writing beautiful poetry he dreams about publishing one day. At times he is proud, certain, decisive. Other times he is insecure, self-conscious, self-loathing. While he struggles to embrace his attraction to men with compassion, he lashes out sexual 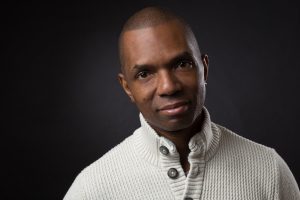 y, even though he wishes for nothing more than love. It’s a journey of self-acceptance, self-recognition, and self-preservation within the confines of extreme environments—an America wrought with vitriolic racial tension and homophobia, and a Paris where blackness is fetishized and commodified under the guise of cultural appreciation and a love of diversity.

Each location is more than just a vibrant backdrop for the goings-on of Ben’s world. They’re living, breathing personalities who are delicately and decadently detailed. Harlem of the 1920s throbs with the rhythm of jazz and racial tension, where “…its saucy beats made men pump their hips in slow pirouettes and women lift their skirts above the knee with a sweltering look that said come and get it, papa.” Similarly, Paris “could be conservative as a mortician’s suit and then you’d round the corner and it was a brazen flapper.” In the “jazz-drenched” province called Montmartre, Black people congregated—mostly musicians looking to make it—and lived their lives as peers of white people for the first time.

Tension runs high throughout the book. Readers are stretched between yearning and rejection; confidence and self-consciousness; and public image versus private image. The first half of the book is fast-paced high drama with intersecting storylines, vivid flashbacks, and subtle premonitions. It’s an emotional whiplash of tremendous highs and devastating lows in bustling Harlem that build the foundation for a tamer second half in Paris, where life slows down after a series of events that challenges Ben’s sense of security in every way.

At its heart, Jazz Moon is a love story of the highest order—the love of self. Ben journeys from one city to another as each environment reveals another layer of himself to explore. Okonkwo creates cinematic visuals in this mini-adventure which sweeps two continents, as if the farther Ben travels from his birthplace of Georgia, the closer he comes to truly understanding how to embrace himself by accepting, exploring, and living the reality of “this thing.” And even though the star of the book is often deeply uncertain and sometimes subservient, we can still root for a hero who is unresolved while finding him to be courageous, bold, and daring enough to find the strength to explore his secret self, thanks to the balanced writing of Okonkwo.

K. Astre is a California writer with a global appetite for art, music and culture. She fuels her creativity with tea, yoga, good music and medication. She lives with her wife and three children in the Bay Area.