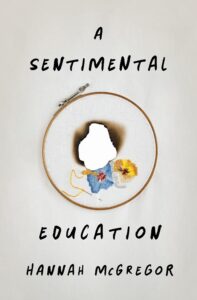 The full-scale uptake of social media since the rise of mega platforms like Facebook, Twitter, and Instagram have led to many critiques of Millennials and Generation Zs for their uncritical devotion to these sites. It’s undeniable that the data-harvesting practices driving platform-capitalist corporations are sinister, but these platforms also provide important creative and community-building “social” elements. Literary and autobiographic technologies—like manuscripts, poems, diaries, blogs, vlogs, podcasts, and even something as seemingly simple and ephemeral as a Snapchat or Tik Tok upload—enable humans to carve out both a life and a self, allowing for expression and opportunities for connection with other like-minded online users. In its (at times) revisionist calls for media production as a key site of feminist community and self-making, Hannah McGregor’s A Sentimental Education (Wilfrid Laurier UP, 2022) takes its place alongside new and urgent directions in feminist theory and cultural production. McGregor writes, for instance, how the self she performs online and through her podcasts began to feel “more authentically me than the one I occupied in ‘real life,’” due to the emphasis on collaboration in these forms. As McGregor puts it: “What language can we find to tell one another stories about our lives, to pile up ephemeral traces that say I am here, and you are here, and we are here together?”

A Sentimental Education is a collection of six essays that outline McGregor’s “extension of [her] commitment to collective learning as a feminist practice.” McGregor is an Associate Professor of Publishing at Simon Fraser University who is at the forefront of Canadian feminist podcasting through projects such as Witch, Please and Secret Feminist Agenda. A Sentimental Education represents McGregor’s efforts to braid and un-braid differing elements of her personal and professional lives through the autotheory mode. This is a cutting-edge method of feminist and queer writing made popular by Maggie Nelson’s The Argonauts (2015) and followed by such writers as Chris Kraus, Sara Ahmed, and Erin Wunker. Nelson explains autotheory as a term that is “not ‘memoir’ … [that] describes autobiographical writing that exceeds the boundaries of the ‘personal’” (qtd. in McCrary & Nelson). For many queer and feminist writers and thinkers, our senses of self are entangled with the texts, music, films, friends, theory that we love, that we have grown up with, and that have made us who we are. Especially when one is existing outside the mainstream (i.e., white, heteronormative, cis-male, able), a more covert compendium of artifacts, networks, and relations fuel one’s growth. Our senses of self are thus formed through the warp and weft of other minds and creators, and autotheory underscores these debts by paying homage to how ideas are never fully singular nor autonomous. McGregor herself has taken autotheory to new heights in her Secret Feminist Agenda podcast through a conversational method she coins as “emergence”—understood as the pure joy and excitement of “just encountering [an other’s] mind.”

The narrative voice in this text represents a version of its author, Hannah McGregor, yet McGregor subtly asserts the complexities of being a public intellectual in A Sentimental Education in terms of what it means to try and perform one’s self online, in podcasting, and in the classroom, therefore challenging the text’s seemingly stable first-person narrator. Such performances, as they resonate in our current era, are beset, for better and for worse, by the concept of relatability. As a public-facing scholar, McGregor explains how fans, colleagues, and followers often feel as if they know her intimately, that the persona she puts forth is a wholly transparent self. The political economy of relatability is such that it has become the hallmark of influencers in platform capitalism: relatability sells. Yet, it also accrues capitalist baggage. McGregor’s text dives deep into the culture of the relatable (white) feminist as this figure exists both online and, in her case, in audio. McGregor as author is quick to admit the costs of relatability: she expresses how a self can be “cannibalized” in the process of creating and nurturing an online following through the performance of a persona that others connect with, and how this can make one feel “invisible.” However, these personal costs also extend to the entrenched structural dilemmas of relatability.

One of this text’s most profound contributions to feminist media and autotheory studies in the twenty-first century is its extended investigation of relatability and its roots to nineteenth-century sentimentalism, which McGregor defines as “an expression of white people’s heightened capacity for appropriate expressions of feeling.” Crucially, white women were the only beneficiaries of such expressions and yet their emotions were disciplined by sentimentalism—lest they imbue a “too-much-ness of empathy and openness to the world” (9).

McGregor admits to feeling kinship with Little Women’s Jo March, Beauty and the Beast’s Belle, and Anne of Green Gables’ fame—“all queer girls just a little out of step with the world around them” who are each bookish, imaginative, and brimming with a “surplus of feeling” (3). Feeling is the balm for a young queer girl coming to grips with their own embodied politics; for McGregor this means inhabiting a body that is out of step with Jo’s, Belle’s, or Anne’s due to her self-proclaimed fatness—a harbinger of the exclusionary nature of sentimentalism.

Sentimentalism has a problematic history, as it was utilized to separate the “rational” man from the “emotional” woman, and then further qualified as a behaviour and/or technique solely ascribed to designated white women. McGregor’s own Sentimental Education traces a through line from sentimentalism to relatability, which has been similarly criticized for centering white, able, often cis-female figures of privilege (ex. Lena Dunham, Sally Rooney) and occluding BIPOC, racialized, non-binary, and disabled folx. The latter are expected to be exceptional, while being considered ordinary is what is needed in order to be deemed relatable. Herein, a specific brand of whiteness is posited as the norm.

Another entanglement concerns the didactic elements within sentimentalism and relatability: for instance, which figures are denoted the authority to instruct others in expressions of “legitimate” emotion and “desirable” performances of an accessible self? To this end, McGregor performs a pointed critique of an episode of the beloved podcast This American Life (TAL) centered upon lived experiences of fatness. She explains how nonfiction radio and podcasts, such as TAL, traffic in twenty first century sentimentalism through their fascination with “story” as symbolic for “universality and shared humanity.” McGregor’s analysis of the TAL episode “Tell Me I’m Fat” begins from her initial affective response to it, which was one of feeling “seen” through its three segments – each of which feature a female-identifying author discussing her fatness. Yet, deeper re-listenings to this episode through the lenses of sentimentalism and relatability drew new conclusions for McGregor:

What I heard was the way each of these women were asked to trot out her body, her pain, and parade it around for a bemused host and an audience of people who presumably had to be convinced to see fat women as fully human.

For McGregor, this episode provides vital epiphanies into her own Sentimental Education. First off, that casting oneself as an “expert” is a position of power that necessitates constant self-reflexivity and accountability. And second, that being the subject of a sentimental story can be a fraught position. On the one hand, “it feels good to be included, but there’s always the stinging reminder that someone else got to decide whether you were included or not.”

McGregor’s text reminds readers of the complexity of existence and creation—both in work and in life—and how the “ephemeral traces” we leave with our performances of selfhood can serve us both in our thinking and in locating our politics and communities. As a serious scholar but one not at ease in praised academic modes of objectivity, constant tear-down critique, and individualism, McGregor’s text thus offers a pointed examination of systemic white supremacist theories and literary forms as they perpetuate in plain sight, while also presenting a call to retain some of the value of the sentimental and the relatable. For queer and feminist creators, especially, returning to the oft-discounted domains of the personal and the emotional is often a radical gesture.  At the same time, A Sentimental Education reminds us that such sharing must be done with the utmost care with respect to awareness of one’s audience, subjects, and to the other beings that have helped to forge one’s own notions. 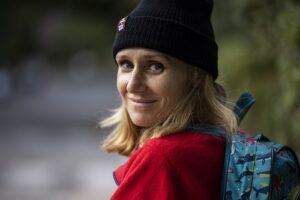 Vange Holtz Schramek’s (she/they) writing appears in Canadian Literature, The Puritan, The Humber Literary Review, Fashion Studies, the Martlet, Grain Magazine, and the chapbook Poems from the Round Room, and is forthcoming in the University of Toronto Quarterly and TEMPER. From the territories presently known as British Columbia, Vange is a PhD candidate in Communication, New Media, and Cultural Studies at McMaster University in what is currently called Hamilton, ON, the traditional territories of the Mississauga and Haudenosaunee nations.