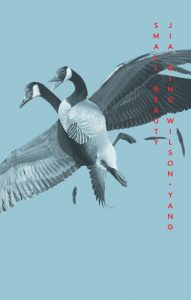 Published in 2016, Jia Qing Wilson-Yang’s Small Beauty is a debut novel that explores family connections and the legacy of racism. The narrative’s central character is a young mixed-race transwoman retracing her family history back through generations while living in her aunt’s rural farmhouse. Many elements of Small Beauty make the novel unique in the landscape of new Queer Canadian literature, including the trans main character and the exploration of a mixed Chinese-white identity. Wilson-Yang’s writing is uncommon, combining a rare talent for poetic description with a solid grasp on the techniques of prose. Small Beauty reads like a complicated love letter to small towns in Southern Ontario, affirming them as places of hope and implicating them in a pervasive racism.

Mei, Wilson-Yang’s protagonist, is instantly real within the first chapter of Small Beauty. She is a depressive but functional transwoman trying to navigate an openly hostile world. There is a sense of ruthless practicality in her. She describes her world in clear terms with little romantic embellishment. Mei’s directness serves to highlight Wilson-Yang’s beautiful prose, as it creates a contrast between the harshness of Mei’s internal world and the vividness of the world around her. More importantly, Mei’s frankness subverts common tropes about transgender characters in fiction.

Small Beauty is narrated by a transwoman who is neither confused by her gender nor struggling to transition. Mei is a woman navigating the intersections of poverty, racism, and gendered violence, but she is not in crisis about being trans. The world around Mei is a hostile one as she experiences racism and transmisogyny on a daily basis, including a violent assault, but these obstacles are presented as a natural part of the literary landscape of Small Beauty. They are problematized by Mei, but they do not constitute the emotional centre or drive of the story. Racism and transmisogyny matter to Wilson-Yang’s protagonist, but Mei’s story is about more than these forces.

The heart of Small Beauty is best showcased with Wilson-Yang’s careful handling of a violent transphobic assault on Mei by strange men in a park. Mei survives the assault by relying on the support of her cousin and an older transwoman mentor. The connections between Mei and her cousin are complicated, resulting in her cousin taking vigilante justice against Mei’s attackers because he views it as his family responsibility to protect and care for her. The narrative struggle is not about Mei’s experience of the assault, but her resistance to accepting the love of her family and her cousin’s inability to demonstrate his affection outside of the bonds of violence. When she hides out in the apartment of her friend immediately after the assault, the bond between them is not just around a shared sense of being transwomen. They connect through their common racialized experiences as Asian women and the bowls of noodle soup that are all Mei can eat while her face heals. While the violence of a transphobic world surrounds Mei, her quest is not about accepting what it means to be a transwoman but how to give and receive love from people around her. Wilson-Yang narrates the intersections of our lives as transwomen, including our familial bonds, identities as members of racialized communities, and our relationships to other transwomen.

At its heart, Small Beauty is about reconciliation. Mei returns to her aunt’s house in a small town in Southern Ontario to reconcile with the legacy of the past. Memories of her absent mother and deceased relatives inhabit the house. Much of the novel is Mei working through those memories, connecting pieces of her childhood with the present. She uncovers hidden relationships, ancestral relics from China, and the web of broken bonds between family members. Her recently deceased cousin has left Mei the house in his will, forming a primary bond of familial love and protection with Mei. The undercurrent of racism that divided the family and fragmented their connections is pulled to the surface to be processed by Mei.

One of the fascinating elements in Small Beauty is the role of ancestral memory. While investigating her family home, Mei uncovers a box of heirlooms from China. She has never encountered these remnants of her grandmother’s life in China. Through this box of leftovers, Wilson-Yang allows her protagonist to explore how her family’s Chinese heritage was erased by their life in a small town. Flashbacks to her grandmother speaking Chinese and memories of her cousin being called racial slurs by schoolmates flood Mei as she stays in the house. When the literal ghost of Mei’s grandmother appears towards the end of Small Beauty, it makes perfect narrative sense.

In other hands, Small Beauty could be a navel-gazing journey. Wilson-Yang’s talent as a storyteller prevents the novel from lapsing into stagnation, as she deftly moves the narrative forward and back through memory, time periods, and people. The atmosphere of the small town saturates the novel, providing passages of descriptive language that elevate the prose. Wilson-Yang adds touches of magical realism to the narrative, merging with the imagery to make Small Beauty dreamlike. It’s a significant and moving debut novel from a writer who shows remarkable lyrical promise. 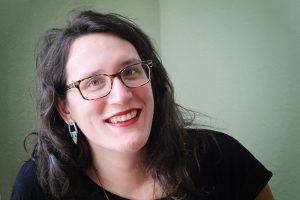 If I have any criticism, it is that the title of Small Beauty undersells its content. There is beauty in the novel but it is not small. Expansive, deeply rooted in Ontario yet still connected to ancestral lands in China, Wilson-Yang’s novel is one of best pieces of fiction I’ve read this year. The uniqueness of Small Beauty’s transgender protagonist cannot be missed in any assessment of the book as well. While the recent explosion of trans characters in media and literature has increased our visibility, we are often limited to narratives around being trans versus actively engaging the world in all aspects of our lives. Mei’s central conflict is not her gender, but her fragmented family and her movement towards coming home to her ancestors.

A goose forms a central plot element in Small Beauty. Part omen from the ancestors, part actual being, the goose stalks Mei throughout the novel. It lingers outside of her family house, hissing and attacking Mei as well as visitors to the farm. It is an insightful representation of the unspoken legacy of racism and family violence. Angry, inarticulate, and omnipotent, the past hunts the present. Wilson-Yang manages to find a path forward to bring Mei home, reconciling the disparate parts of her life.

Given this narrative complexity, it is especially wrong to classify Small Beauty as just a “trans book.” Wilson-Yang may not have intentionally channelled any of the great Southern Ontario Gothic writers such as Alice Munro or Timothy Findley, but Small Beauty is a striking and innovative example of this genre’s exploration of the inner landscape of small towns. Like other works in the Southern Ontario Gothic family, Small Beauty’s power is in exploring the delicate and painful bonds between the people we love and the environment around us.

Gwen Benaway is of Anishinaabe and Métis descent. Her first collection of poetry, Ceremonies for the Dead, was published in 2013 and her second collection of poetry, Passage, is forthcoming from Kegedonce Press in Fall 2016. An emerging Two-Spirited Trans poet, she has been described as the spiritual love child of Tomson Highway and Anne Sexton. In 2015, she was the recipient of the inaugural Speaker’s Award for a Young Author and in 2016 she received a Dayne Ogilvie Honour of Distinction for Emerging Queer Authors from the Writer’s Trust of Canada. Her work has been published and anthologized internationally. She and her many vintage dresses can be found on Instagram @gwenbenaway