I think a lot of straight people don’t realize
how closets work. They picture you
malingering in a darkened chamber,
clarities about yourself
wrapped round your skin like leopard print,
self-knowledge self-available,
your only real deficiency the courage to—
deep breath!—release the door and step
on out.

It’s not like that.
Or at least not
in every case.

The closet can alternatively
be a desperate fixity
of vision, earnest gaze unswerving
from one clear, respectable direction. And/or
just a No—a vexed negation of a truth
that gives itself away by its
insistence in the absence of
a strong opposing claim. I’m not,
I’m really not. Okay: who said you were?
Which isn’t to imply that all confessions
mean their opposites, but just to say
that closets operate this way
sometimes: a knowing that insinuates
itself beneath persuasive strata
of unknowing, where the captive in the dark
is never quite a victim but
is also not the hegemon
who camouflaged the exit routes—
is not the ancient patriarch
who stood outside the closet door
and counterfeit a sound just like
the cinching of a heavy lock. 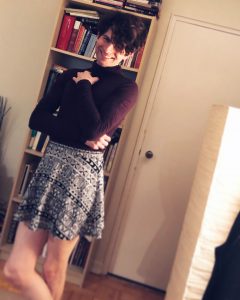 Daniel Karasik (they/them) is the author of a poetry collection, Hungry (Cormorant Books), along with four other books of drama and fiction. They organize for labour justice with the Fight for $15 and Fairness movement in Toronto, and help facilitate a restorative justice-based healing/rehabilitation program for formerly incarcerated people, among other community work things. Their writing on prison abolition and trans liberation has appeared in Briarpatch Magazine; they were also recently a finalist in the poetry category of Briarpatch’s annual writing contest. Past honours include the CBC Short Story Prize and the Toronto Arts Foundation’s Emerging Artist Award.