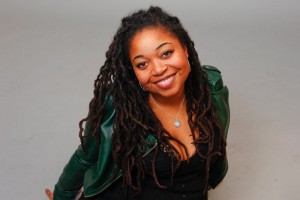 Jillian Christmas is a powerful force in the spoken word and slam poetry scene. Many of our readers are already familiar with Christmas’s work both in Vancouver and nation-wide. I had the lovely surprise of attending the reading series Chicken Sessions, where I saw Jillian perform solo and with Chelsea Johnson, an amazing musician and long-time collaborator. I finally caught up with Jillian to see what projects she has on the go and what she’s been doing with the summer. It turns out, as no surprise, that she’s doing quite a lot.

How did you become involved in the world of slam poetry?

As a young malcontent, poetry was a natural salve for the worries and angst of my adolescent life, but it wasn’t until my mid-twenties that I was introduced to the stage. I found myself on a terribly awkward date back in 2008; as I was filing through reasons to end the visit and ways to gracefully depart, my date asked if I’d like to watch a DVD. I supposed that I could survive a DVD, at least neither of us would have to talk. The DVD was Russel Simmons’ Def Poetry Jam, it changed my entire life. The date and I didn’t have much of a future, but I did meet one of the great loves of my life that night.

How have you seen your work evolve over the years?

Certainly I have watched my work evolve since first entering into the world of poetry. As anyone who has grown long-toothed in the age of technology knows, there is plenty of room for the cringe-worthy videos of our youth within the echoing depths of the Internet. Occasionally I happen upon some of my early work, and though I can, from time to time, stomach the unnecessarily long pauses in my performance or the deep and obvious desire for my audience to love me (please love me!!!), more often than not I find that my favourite work is my most recent. I think it’s a common experience. It’s not that the previous work was as terrible as it sometimes feels upon playback years later — everything has a learning curve, and all of the experiences that get us here are valid — it’s simply much easier to recognize myself in the work that I am creating as of late.

What attracts you to spoken word as a artistic medium?

I love any form of communication that involves direct contact. I crave the ability to look my audience in the eyes, to share the story with them and allow their reactions to shape my delivery. Spoken word is a conversation and I love a good conversation.

What have you been doing over your summer?

The majority of my year involves a significant amount of administrative work, but summers are all mine. I have the extreme pleasure of working with a number of incredibly talented artists, thus my summer has been filled with short tours around the Gulf Islands, and through the interior of BC. My main summer goals have been to swim as often as possible, sing my heart out at every opportunity, and write, write, write. With a little luck I should have a new collection of poems completed by the time winter rolls around here in Vancouver. Fingers crossed.

Who are some slam poets you have your eye on?

Lately I’ve been really enjoying the work of Coral More and Tasha Receno, two of the newest members of the Vancouver Poetry Slam team. They are currently headed off to Oakland, California, to represent Vancouver on the international stage and I know they will do us proud. Both have a knack for telling complicated stories in a way that extracts a universal meaning without losing any of the gritty and glorious details that make their poems so unique. Also Maneo Mohale, a brilliant heart studying at UBC (by way of South Africa), who I have now had the honour of performing with twice. I could listen to Maneo’s tender delivery for hours, but it would take much longer to dissect the depth of her lyricism. She is unafraid to tackle difficult topics and she does so with a compassion and insight that suggest a long and enduring body of work yet to come … and don’t even get me started on her singing voice. Gorgeous.

I saw you perform with Chelsea Johnson at the Chicken Session reading series. It was amazing to see you both collaborating. What can audiences expect from you both in the future?

Chelsea and I have been working together for close to four years now, and some days I still can’t believe how lucky I am. Over the last year we have been putting our energies toward a new project, our band The Late Nights, with phenomenal drummer Jess Jungalwalla, out of Australia. The band is a mix of soul, rock and spoken-word, and it is thick with three part harmonies. Working with these ladies recharges my battery in a way that is necessary for all of the working and loving that I do. We just finished a tour up in Northern BC, and if all of our mutually busy schedules align, you will be hearing a new LP from The Late Nights in the not so distant future.

Can you tell our readers about your time as artistic director of Verses Festival of Words?

I’ve been fortunate enough to be a part of the programming committee of Verses Festival of Words for the last three years. For the past two years my curating roll as artistic director has allowed me the great honour of facilitating space for some of the most brilliant poets, songwriters, comedians, storytellers, workshop facilitators and all around creative minds that this continent has to offer. This year the incomparable Erin Kirsh has joined our team as managing director, and I am thrilled to be working so closely with her on a project that we both believe in so deeply. The work for the 2016 festival has already begun … Stay tuned for the wonderful art explosion that is sure to unfold all of over Commercial Drive [in Vancouver] come April. www.versesfestival.ca

Read some of Jillian’s recent work on Plenitude!

Matthew Walsh is a writer from Nova Scotia. His work has appeared in Arc, the Found Poetry Review, Carousel, Descant, Existere, Matrix, Carte Blanche, and the Steel Chisel and as part of the Halifax Commons poetry anthology. His long poem “Cloud Grape” won the York University President’s Prize for poetry. He is also the recipient of the 2014 John Newlove Award for poetry.