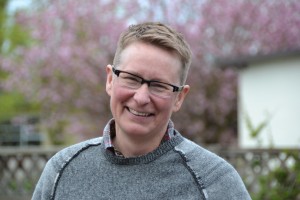 “If you scan my bookshelves you can pick out the books I gobbled up coming out in the ’80s—the green-spined Virago re-issues of lost women’s classics, the zebra-striped spines of The Women’s Press with the little clothes-iron colophon (so clever! so ironic!) and ‘Steaming ahead!’ motto, the Press Gang books, the balloon-lettered Firebrand books. Sigh. Women’s presses.

“The Women’s Press—and let’s not leave out the Toronto Women’s Bookstore—was how I came to The Conversations of Cow by Suniti Namjoshi, a wonderfully offbeat little volume in which a fictionalized Suniti, then living in Toronto, meets Cow of a Thousand Wishes, the goddess, and invites her to become her travelling companion. The two of them contort through a comic series of Cow’s manifestations—gorgeous Bhadravati, gruff Bud—and Suniti’s figuring out who to be in relation to her until they pretty much live happily ever after.

“It delighted me then for its sauciness, its lightness, its boldness and verve, its visit to a commune of lesbian cows. If the delight is the slightest bit rubbed off now, the book compensates with an added ting of historical interest. I’m sure there are still communal lesbian farms out there, but I haven’t been to one since summer solstice, 1985.”

Anne Fleming’s three books, Gay Dwarves of America, Anomaly, and Pool-Hopping and Other Stories, have been shortlisted for some nice prizes, including the Governor General’s Award. A book of poems will be out next year, and maybe also, fingers crossed, a children’s book about a mountain goat in New York City.