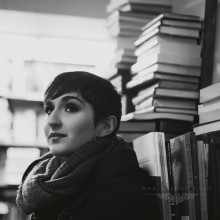 When are we going to start believing women who are brave enough to come forward to share their stories? When are we going to trust that survivors know their own bodies and experiences? These questions haunted me while I read Leah Horlick’s latest collection of poems, For Your Own Good.

To expose the stories more commonly shrouded in silence and shame is a twofold activity. It requires the daring to stand up and say it, to single oneself out, which is extraordinarily vulnerable. But it also requires a willingness, on the part of hearers, to listen. This collection explores the process of Horlick’s story, from her own struggle to see things clearly to telling her truth and the subsequent (mis-) understanding thereof.

The subject of systemic silencing has come up in much of my reading lately. From Tina Fey’s Bossypants to Rebecca Solnit’s Men Explain Things to Me to the many online tirades about rape culture, perpetrator apologists, and the like, there is no shortage of exposure these days. It’s like we’re finally having conversations that should have happened decades and centuries ago. However, the discussions tend toward placing violence against women in the context of patriarchy. There is no shortage of evidence that men inflict violence upon women. What do you do when it happens in the supposed safety of queer relationships?

Reading Leah Horlick’s collection, I felt a sense of relief. Finally, we’re here. Finally, we’re talking about this. Her collection opens the space for reflection on spousal abuse and domestic violence amongst women. I found myself nodding along, thinking about the women who’ve shared their complex histories with me, who’ve trusted me with their stories, because this is what Leah Horlick does in this collection: she trusts us with her story.

The impact of such vulnerability is huge. Never self-pitying nor psychoanalytical, Horlick’s poems tell a story that is cloaked in disbelief and silence. Read together, these poems explore the various mindsets involved in the experience of abuse. From the questioning of her own experience to the search for allies and eventually to the acknowledgement of her own legitimacy, Horlick’s verses are dynamic portrayals of herself and her community.

Horlick’s artful weaving together of animal imagery creates a unique sense of kinship to nature. Birds play a complex role in the collection, representative not only of freedom but of archaism and cruelty. In “Vulture,” the line “picked apart by your own kind” has an eerie feel to it, calling to mind the shadow elements of community. For anyone lulled into the sense that queer communities are inherently anti-oppressive and based in utopian ideals, Horlick reminds the reader that sometimes the very people who are supposed to be allies are in fact enemies.

This collection thwarts the paternalistic need to represent queer communities in an idealistic way. I admire Horlick’s invitation to engage with the difficult grey area between attraction and abuse. Some lines are fraught with tension and heat. “She was sure / you would like it. / She could tell / just by looking.” Other lines call previous ones into question. “You made her do it, this / the unnatural act, and you’re what / has to break before her fever.”

Horlick reminds us that nobody signs up for abusive treatment. These dynamics creep up on us in relationships. They’re not simple. If they were, they’d be easy to avoid. Rather than fall into a perpetrator-victim binary, Horlick, who seems to speak from an enlightened perspective to a former self, holds herself accountable. “If only you had done / something. You could see it / all along.”

Yet, while Horlick confronts and lays bare the utter solitude of being in a destructive dynamic, she also conveys the warmth of finding support. Horlick’s poem “Horoscope” is a homage to friends who were present for her. “They make you say useful. / They make you say smart.” I found myself crying at a number of poems in the collection and this was one. To remind the reader of the unconditional love of friendship is so important, especially in this context. These bright moments, so full of love, are crucial to the landscape of the collection. Horlick does not lead the reader to a place of doom and despair. Rather, she weaves together the complexity of experience.

In the “Conclusion,” we learn that when the abuse happened, Horlick was a gender studies student, an out, queer lesbian with friends and an affirming family. This is telling. It is a reminder that in spite of the appearances of community, we are still alone. We may be safe in public environments (debatably) but we can go home to encounter crushing and debilitating abuse, both mental and physical. She tells us about searching to find any representation of her story but there was nothing. The catastrophic silence around survival is quite possibly the main theme and reason behind this tremendous work. Horlick links this dangerous suppression to colonialism and oppressive systems of power. 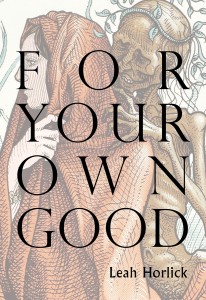 The collection shines particularly with Horlick’s revelation of her doubts and shadows. She wants to make sense of her relationship, wants, as we all do, to be loved. This collection is not a simplistic depiction of a bad relationship; it is about the challenge of seeing one’s own self in a clear way, an undertaking that is nearly impossible. Horlick is simultaneously calling out a villain and confronting the villain inside of herself who convinced her that she was not seeing things correctly or that she deserved what happened.

In Men Explain Things to Me, Rebecca Solnit argues that the predominance of male psychological theory and history convinced all of us that women are not to be trusted with our own stories. Women are hysterical and unable to be objective. Horlick, too, deals with the aftermath of Freud and his followers. There’s an urgency to claiming her space and legitimacy, one that I appreciate so very much because it reflects an optimistic assumption about her reader. We are ready to hear her. We are ready to listen. We are ready to understand, and finally emerge from silence.

Generously, Horlick shines a light on her own history and captures snippets of a secretive past. In reading these poems, we see a more mature Horlick looking at her younger self with compassion, telling herself that she is not alone and that, by extension, none of us are.