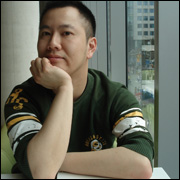 “One of the most influential books for me as a gay Asian-Canadian writer has to be Wayson Choy’s The Jade Peony. It tells a tale of what growing up in Chinatown Vancouver back in the 1930s and 1940s was like.

“Told in three sections, the book splits up the narration between three family members. One of those family members just happens to be gay, which is hinted at ever so subtly yet manages to be beautifully striking at the same time. By exploring the character’s sexuality, Choy manages to make me feel as though I belonged and that the story I have to tell is important too.

“I had the chance to interview Wayson Choy a few years ago for a magazine and we talked a lot about his life growing up in Chinatown Vancouver and being gay. The story he weaves in The Jade Peony comes from experience and wisdom, heartache and redemption.

“This is an important piece of gay, as well as Asian-Canadian, literature. It definitely helped me find my voice as a writer and gave my point of view some much needed affirmation. Thank you Wayson for your continued inspiration!”

Alan Woo is the author of the children’s book Maggie’s Chopsticks, which won the Christie Harris Illustrated Children’s Literature Award at the BC Book Prizes in 2013. He’s currently started a book of poetry titled Confessions From a Dead End Job, and several short story collections (which one day he hopes to complete). His next children’s book is in the works, and will be about a new boy at school who, at recess, teaches the game of Chinese Skip to other kids.