I’ve been walking in the woods for some time when I see it: a bright synthetic pulse of colour, about a stone’s throw from the trail, peeking out from the dead leaves. Upon further inspection it’s a cross, tole painted in uneven coats of periwinkle blue. In a careful and tidy hand, someone has written KIMOTHY—1986-2002—TAKEN FROM US. The cross is hung with a wreath of fabric flowers, their petals faded to a pale mauve by seasons past.

A chill runs down my spine. Am I standing on someone’s final resting place? And yet the earth looks undisturbed. Maybe they died here, and a sister monument stands in the consecrated soil of a nearby cemetery—a granite headstone embroidered with moss and lichen. Or perhaps this Kimothy has been taken in another sense. Given the setting, maybe an evangelical parent erected the cross for their errant child. Or—I notice a beer can lying in the undergrowth—maybe someone marked the beloved hangout spot of a friend who abandoned them for Jesus.

The mushrooms are more elusive than anticipated. My wicker basket is nearly empty; what I’ve collected barely covers its gingham lining. Abigail talks about the chanterelles in the woods beside her childhood home as if they’re ambrosia. Their golden flesh, she says, is peppery, with a divine hint of peach. I’m going to serve the mushrooms in a rich cream sauce with ribbons of tagliatelle, and then I’m going to propose.

Further from the trail I glimpse a golden cap under the canopy of an immense oak. I wade through the bramble, and I’m kneeling to cut the mushroom’s stem when the rhythmic pounding of shoes against gravel reaches my ears. My pulse quickens at the sound, my knuckles grow white around the knife’s handle. A jogger emerges through the dense vegetation, his bare torso gleaming in the sunlight. He waves to me and then disappears around a bend in the trail.

I am, like many survivors, hypervigilant. A year before I would’ve bolted through the trees at the sight of him, but my actions are no longer governed by my hyperactive nervous system. Besides, this isn’t the sort of place where sinister things happen to young women. Granted the cross was creepy, but I saw one just like it on the side of the highway this morning. Abigail seldom speaks of home, but when she does, it’s of a folksy community where neighbours lend each other cups of sugar and no one locks their doors. Her fire-and-brimstone parents don’t love the fact that their only child is a lesbian, and so I’ve never been invited to visit. But the folks I met at the diner were welcoming—one of them gave me a quaint book of prayers.

I spy more chanterelles through the trees; they beckon like a trail of breadcrumbs. The sun is sinking in the sky, and I’m hesitant to leave the path proper, but it seems to be the only way to fill my basket. I conjure a vision of the sparkling joy in my girlfriend’s amber eyes when I present her with the sentimental meal. I’ve driven two hours to get here, I’m not about to return empty-handed. And so I make my way through the woods, and the birches and poplars taper off, giving way to massive walls of sea-green pines beyond which stretches the forest’s hidden depths.

My basket is nearly full when the sun begins to set in earnest, and it dawns on me that I am lost. It’s eerily still, and I feel as if I’ve crossed a threshold into the forest’s core, where the vast expanse of foliage muffles any sound of civilization. I wrestle against a creeping sense of panic—there’s a full moon tonight, I tell myself, and the forest is only three hundred acres. I count my steps under my breath, and with every hundred taken, I tear a strip of cloth from my basket and tie it to a branch for good measure. I’m not going to be like those hopeless souls in the Blair Witch Project who circled back on themselves like a snake eating its tail.

I’ve counted six hundred and fifty-four steps when I come across a path. It’s overgrown; in several places it’s barely there. A desire path, one might call it. It’s an improvement on the labyrinth of trees from which I’ve emerged, and so I take it. Country barn stars are nailed to trees here and there, presumably as wayfinders. I recognize these objects—I saw larger versions mounted on the strawberry-box houses in the surrounding area. Their deep ochre finish is barely visible against the dark trunks.

I walk until I reach a gate set in a wrought-iron fence. Along its perimeter, wild rose bushes spurt from the ground like pricked fingers of the earth. A Pinterest-worthy sign hangs from the gate. WELCOME, it reads, in twee cursive lettering. I push it open—its creaking hinges cut the silence of the woods—and I walk into the clearing beyond.

At first I think it’s a tree, but then I notice the hands. The statue is at least six feet tall, carved out of wood. It depicts a woman kneeling, her hands stretched towards the sky in a pose of supplication. It’s like finding a shipwreck on an ocean floor; it doesn’t belong.

Adirondack chairs are arranged in a horseshoe before the statue. I pass between them, taking in the rough-hewn features of the woman’s face—the corners of her mouth are downturned in an expression of grief, or maybe terror. Someone has dripped candle wax down the statue’s cheeks so that it looks as if she is weeping. I feel lightheaded; my ears are ringing.

“Are you lost, little lamb?”

I spin around to find a shadowy figure leaning against a tree. His eyes are green as grass; there is a frenzied glimmer in them.

“Um, no. I think—maybe?” I can’t tell what frequency he’s vibrating at, mentally speaking, and I don’t want to provoke him.

“Have you come to the house of God in search of salvation?” He takes an occasional step towards me as he speaks, almost as if in a trance. His eyes look through me more than at me.

“Oh my god, no.” I back away slowly, cautiously.

“He’s my God too,” says the man with a look of rebuke.

“I said he’s my God, too.” He moves out of the shadows, and in the waning light I can see that he’s in his forties, clean-shaven, smartly dressed in a wool suit. “You are come unto Mount Zion,” he says, “unto the city of the living God.” He pauses for a moment, as if to let the silence of the woods punctuate his words. “We have found what Abraham was looking for.” He points to the darkening sky. “And by the grace of God we’re going to walk up there. Let God’s enemies be scattered, and he will open the door.”

“If you could tell—”

“Shhhhh.” He puts a finger to his lips. Blindly I back into a chair and fall into a seated position. “The Devil is here,” he says in an almost-whisper. And then, for the first time—as if he’s only just noticed me—he looks directly into my eyes. “Young lady, I don’t think you’re going to leave here like you came.”

He extends his arms towards me and I lose it. The blade glints in the lingering embers of daylight; a long crimson ribbon appears on his forearm. His lungs unleash a terrible lupine howl as I spring from the chair and dart towards the trees.

Sharp thorns claw at my limbs as I tear through the darkness, between towering trees, their teal-black outlines barely there against the inky sky. I trip over a root and fall to my knees as my basket sails through the air, its contents catapulting into the night. I recover and run on, leaving in my wake a trail of broken chanterelles, and the faint thudding—imagined or real—of footsteps behind me.

Abigail dabs at my skinned knee with hydrogen peroxide, and I wince. It’s 1:18am and we are side-by-side on the brocade loveseat in our living room. Half-eaten bowls of store-bought tortellini sit abandoned on the heart-shaped coffee table.

“Honestly, it’s a blur,” I say. “It was pure animal instinct that got me out of that—that place.”

“The forest chapel,” she says, smoothing a bandage over my knee. “It’s super weird, I know.” She tells me that the clearing in the woods—where I saw the weeping statue—is some kind of al fresco church where the community meets to worship, weather permitting.

“What you tried to do for me, with the mushrooms, that was so nice.” She smiles sadly and looks down at her lap. “Maybe I talk about the chanterelles because they’re the only good memory I have of that place.” I take her hand in mine and squeeze it. “I can’t believe you slashed one of those Jesus freaks,” she says. “I would’ve paid to see it.” A blush creeps over her freckled face. “Oh my god,” she says. “I’m sorry. Too soon.”

We sit in silence for a moment. Then I turn to her, and with a straight face, I say, “He’s my god, too.” We laugh so hard we can’t breathe. When the hysterics die down, we find ourselves in each other’s arms. “I feel kind of bad, in a sense,” I say, stroking Abigail’s hair. “I don’t think he meant to hurt me. I think he wanted to bless me.”

“Knowing those people, I think he wanted to exorcise you.” She laughs darkly. “Or worse.”

We start on our bedtime routine. The altercation in the clearing has all but eclipsed my memory of the cross in the woods. I’m washing my face when the scene returns to the surface of my mind. “Abby,” I say, looking at her through the mirror. “Does the name Kimothy mean anything to you?”

The colour drains from her face. But she says no, she’s never heard the name before. Then she turns on her heel and vanishes into the shadow of the hallway.

I lay in bed under a sliver of moonlight, counting my breaths in the darkness. The stranger in the woods is going to be okay. I’m no murderer—the paring knife is capable of nothing more than a shallow wound. Undoubtedly, he’ll have a scar on his forearm for the rest of his life. My own scar from the encounter will be less tangible.

How little I know of my girlfriend’s origins; the things she’s seen, heard, felt. It seems we both have secret chambers of the mind. Or worse, she’d said. What could be worse? In the moment I lacked the energy to pursue it, but now the words return to haunt me.

In the silence of the room, her eyelashes make scraping sounds against the cotton pillowcase. I know she’s sleepless as well. The velvet ring box is buried deep beneath our summer clothes, in the cedar chest at the foot of the bed, where it will remain for some time yet. 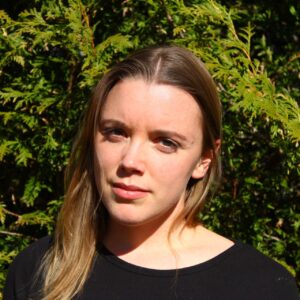 Miriam Richer is a writer, a digital artist, and an information professional. They were born in California, and have spent most of their life on unceded Wolastoqiyik territory. They are currently under the influence of folklore, the uncanny, and the rural gothic.