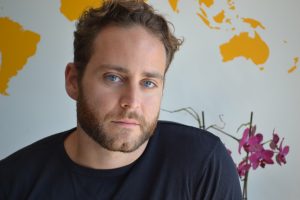 Saleem Haddad was born in Kuwait City to an Iraqi-German mother and a Palestinian-Lebanese father. He has worked with Médecins Sans Frontières and other international organizations in Yemen, Syria, Iraq, Libya, Lebanon, and Egypt. His first novel, Guapa, was published in 2016, a political and personal coming-of-age story of a young gay man living through the 2011 Arab revolutions.

Rachna Contractor: It feels palpable that Guapa, set in an Arab country during times of revolution, would touch on themes of capitalism and post-colonialism. Did you intend for this novel to send certain messages to readers in the Middle East?

Saleem Haddad: Yes, there are many messages in there for Middle Eastern readers—I wanted to send strong messages about my disdain for the rigid class structures in the region, and how oblivious those of us at the top can be to the reality of what’s happening in other parts of our country. But I wanted to do so with humour, and to be tongue-in-cheek about it, so that’s why I utilised satire.

RC: I was raised in Dubai, with some Arab culture, so I felt a strong connection to the aspects of this novel that dealt with Arabness rather than queerness. For people of colour, immigrants, there is often an expectation that we need to reconcile our queerness with our cultures of origin; I find this Western idea to be problematic, racist. How do you respond to this expectation? And how do you either blur or maintain all of the lines that make up your whole?

SH: I often get asked how is it possible to be both Arab and queer, as if it is so easy to disassemble our identities like puzzle pieces. But I am not a fan of binaries and not a fan of fixed identities, including notions of “the West” and “the East.” The world is much more complicated than that and we should avoid trying to simplify it by allowing ourselves to fall back on these labels. For me, writing the novel was my way of relating one experience of Arab queerness, and I only did so once I stopped thinking of these labels entirely and simply focused on a single experience or life, in all its contradictions. As for how I navigate the question when asked what it is like being Arab and queer, I just ask the interviewer what it’s like being straight and white.

RC: For the first half of Guapa, I felt like I was reading a love letter. Then I began to think about how Arabic is a much more romantic language, and [wonder] if you wanted to write this novel in Arabic?

SH: That’s nice to hear, because in many ways writing the novel felt like writing a love letter to the Arab world. Like all love letters, it was written with an honesty that wasn’t afraid to be critical when criticism was required. I was writing the novel during a very emotional time in the region, a time when there was so much at stake, and everyone was involved in politics in a way I had never experienced before. I had so much love for the Arab world at the time, that moment when we finally realised that it was us—citizens—who owned our countries, not the dictators. I wrote this while existing in a very transient space. I was living in London, but visiting the region regularly. I was filled with conflicting feelings of nostalgia, of wanting to permanently return to the Middle East, and yet also of being hesitant to put all my eggs in the revolutions (because at the time I was in the final stages of my immigration process in the UK, so returning to the region would have meant losing the opportunity to immigrate and get a British passport).

As for whether I wanted to write the novel in Arabic—in my head, parts of the dialogue were written in Arabic before I translated them to English, especially the conversations with Ahmed, Teta, and the various taxi drivers. Otherwise, I quickly realized this was a novel that I could only write in English. If I tried writing it in Arabic, it would be a very different novel (it would also have taken me double the time to write!).

RC: In writing Guapa, did you feel you needed to counter perceptions of Arab culture as being homophobic? Or maybe assert this perception, in order to sell books in the West?

HD: Neither. I was interested in telling the truth, as I knew it, unapologetically. Inevitably telling the truth as I saw it was to complicate simplistic notions of how homophobia manifests itself in the Arab world, and how interconnected homophobia is to other issues around patriarchy, class dimensions, and political rights.

RC: What and who are you looking forward to reading in 2017?

SH: I have so many books on my bedside table that I’ve forbidden myself from purchasing any more books this year, but I’m making an exception for Omar Robert Hamilton’s The City Always Wins.

Rachna Contractor is Reviews Editor for Plenitude Magazine. She has written about literature, art and culture for Xtra, Wiqaable and Kala Magazine. She earned her BA in Art History from the University of Toronto. After working in communications for over a decade, Rachna moved to the hospitality industry where she combines her interests in story-telling and food. Rachna (r-uh-ch-nah) lives in Parkdale, Toronto.