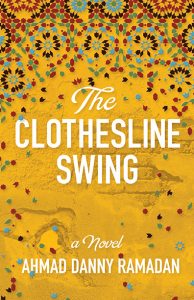 Ahmad Danny Ramadan isn’t afraid to challenge readers with The Clothesline Swing, his debut novel. Weaving together fantastic and magical tales with those that are heartbreaking, sobering, drunken, and decadent, Ramadan’s storyteller, an old man residing in Vancouver West End who was born and raised in Damascus during a turbulent era of Syria’s history, is beguiling and mercurial. This man’s artful playing with truth, lies, and that massive grey area between the two confounds and mesmerizes. Named Hakawati, the narrator isn’t just weaving stories for the sake of speaking. His long-term partner is sick, and with impatient black-clad Death literally occupying the same rooms, Hakawati’s fighting for more time, more love, and more memories before his partner’s soul is taken away forever.

Brett Josef Grubisic interviewed the author in advance of his novel’s publication on May 9.

ADR: I enjoy writing short stories; I find them mesmerizing and capable of telling a small peculiar detail that would reveal much of my characters’ background through the lenses of limited narratives. I also highly doubt I stepped away from the genre: The Clothesline Swing is—in a way—a collection of short stories with intertwining characters that weave in and out of each other’s lives. I think that as I got older, I became more capable of seeing the complexity of the human condition, and see the intersectionality of people around me—as well as myself. That allowed me to see the many faces one can wear, and the many stories one can carry. In a way, my experiences and knowledge reflected in how I master my craft, and how I want to tell a story in a more complex way.

As for the language, I think that I’m adaptable. I have always enjoyed writing in Arabic, and I still do. But I find myself capable of telling the same stories in English in a way that reflects my culture and background as a person indigenous to a nation of storytellers, as well as allows me to pull the curtains apart for folks on this side of the world to see the real Damascus—the city I loved—rather than the desert full of fighters and war people see on television.

BJG: Fending off Death, your storyteller narrator compares himself to Scheherazade. When working within that classical literary figure (and technique), what peculiar challenges did you face?

ADR: I’ve always been fascinated by this triangle of characters in One Thousand and One Nights. There is a power dynamic there between a woman who is only capable of saving her own life through her craft as a storyteller, and a powerful man who is mesmerized by her—and almost defenceless to her power despite having a swordsman who can off her head without hesitation. I think that the most peculiar challenge I found using this technique is to remain true to this balance of power; Hakawati has something to gain by telling stories—he is saving his own life, keeping his idea of death at bay. His worst nightmare is loneliness without his partner—for what’s a storyteller without a listener to validate his stories?

The listener, while passive and almost defenceless to Hakawati’s waves of stories, is actually the more powerful side of the relationship, and by dying he is punishing his partner further than he can imagine; he is making him suffer through his worst nightmare.

Also, it would have been easy to just let the characters talk, or tell a chronicle story of the two lovers; I didn’t want to write a book where one-dimensional characters are telling redundant stories about predictable struggles of refugees and clichés of Syrian culture. I wanted to tell a meaningful story, with characters that have depth and authenticity.

BJG: The storyteller mixes together magical tales, fables, and harrowing (and seemingly realistic) accounts from his own life and those of family and friends…while also suggesting that he might be insane and imagining the story from “a mental hospital bed.” What drew you to create such a complex way to render your story?

ADR: The first answer that jumped to my head when I got this question was “Why the hell not?”—haha.

In all seriousness, I believe that the mental affects of going through the experience refugees go through remain an underrated topic to discuss. The alienation, longing for home, and the PTSD many refugees go through is worth noting and exploring. It’s also worth telling and sharing. Now, looking at queer-identifying refugees, those are folks who always felt alienated and experienced traumatic events in their daily life, and going through the physical experience of moving not only across the world, but also across cultures, would surely trigger such issues.

Also, looking at Hakawati—a person growing up with a mentally ill parent and an abandonment issue—who ended up finding a fleeting sense of happiness and home with his partner and then feeling that he is about to lose that home will surely trigger those abandonment issues and make him believe he might be hallucinating that previous joy as he’s starting to grasp the fact he is about to lose it.

In my mind, Hakawati is not insane. He is just frightened and mentally decaying—hence his friendship with Death.

BJG: Your storyteller says, “We rarely leave the past behind and completely let go. Sometimes we even forget the past, but its residue remains within us.” How did you go about choosing what of  your own past experiences in Syria wound up in your novel? 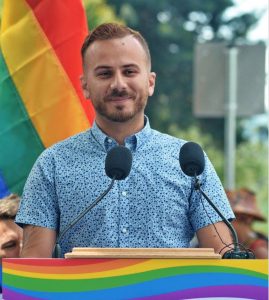 ADR: In my acknowledgements at the end of the book, I thank a number of friends and acquaintances from back in the Middle East by first name only for their stories they shared with me. This book wouldn’t have been rich with details the way it is if I didn’t hear those stories and go through some magical experiences I had with the many friends I left behind in the Middle East. I think that I melded those stories with my own personal stories and made them into this book. Many of those stories might have become unrecognizable even to those I was inspired by to write them.

Also, some of those stories are roads that I wish I took that I explored in my own writing. As well as two stories in the book told by Hakawati that are true events I personally went through, and writing them the way I did allowed me healing that I didn’t imagine is possible. I think part of that healing is for people to read them and to be affected by them, and that’s why I shared them.

BJG: The storyteller’s remembrances of his past are often violent, harrowing, and brutal. In contrast, fleeting and long-lasting friendships between gay people as well as their love affairs, while often secret and intoxicated, are a lovely and necessary positive force in your book. How different is your personal understanding of queer life in Damascus from that of the storyteller?

ADR: I think this is one of the places where Hakawati and I see eye to eye on a topic: I think that there are so many understandings that can be brought to light when talking about queer life in Damascus, and I have tried my best to reflect many of them in the book through multiple characters. I think that queer life is a secretive life that is so far off the mainstream it became a beautiful—yet sometimes lonely and scary—variety of its own. Some of my queer Syrian characters are rebellious souls pushing the envelope and trying to find their place in the reality of Damascus while other queer characters are just trying to survive it. Some of them are impacted by their queer identity in a way that changed their lives or even ended them.

I think allowing all of those characters to exist and tell their different stories reflects the reality of queer life in Syria; it’s a colourful mix of horror, beauty, friendship, love, and social hatred.

BJG: Although set in what I understand as a future version of Vancouver’s West End, the city itself and Canadian culture more generally appear to make little impression or have little positive influence on the story’s lovers. As the teller of an immigrants’ tale, what led to that characterization of the place?

ADR: All right. I have to be honest here, this is a logistical issue more than a creative choice: this happened mainly because I wrote 80% of the book between 2013 and 2014 while I was still in Beirut as a refugee and before I came to Canada with little to no knowledge about Canadian culture or what Vancouver is like.

As I edited the book with my wonderful editor, we started to enhance the Canadian narrative and add to it. I have thought about adding more touches of the Canadian culture to the book as I was working on its final draft months ago, but then I looked at my characters and at their own lives. These are two men who rarely left each other’s sides, they’re haunted by their experiences and struggles to come to Canada. It makes sense to me that they would be prisoners of their own past instead of stepping outside into this new culture. First-generation immigrants, you’d notice, are the least [likely] generation to let go of their home cultures, and the ones who struggle to learn English and adapt to the Canadian culture and the Canadian weather. It stands to reason that those two men have found peace here in Canada, but they didn’t explore it further—they didn’t want to find more trouble; they had their fair share of that.

BJG: Reluctant nomadism—as a physical fact and state of mind—forms a kind of theme or undercurrent in your novel. For a refugee, such as Hakawati and his partner, how do you see that pattern of nomadism as impacting daily life?

ADR: From personal experience, I can tell you that change became my normal. Routine is scary, like a ticking clock of a time bomb. The longer I stay still, the more anxious I become. I feel like a sitting duck; I become an easier target for my own demons.

This served me well in my own travels around the Middle East; it sheltered me when I needed to escape one corner to live in the next, allowed me to land on my feet like a street cat, and protected me from being exposed for my sexual identity. But as I came here to Canada, it became more difficult and challenging; my mind wants to continue running, but it doesn’t know from what anymore.

Today, I’m here in Vancouver, I’m where I belong. I live today for today, and I hope that the more roots I dig in here, the stronger that sense of home becomes.