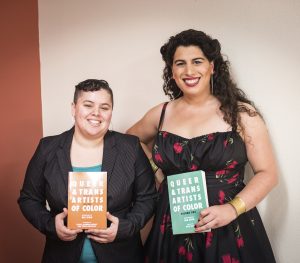 Nia King with Elena Rose, her co-editor for the second volume

Nia King is a queer, mixed-race artist and activist from Canton, MA (Wampanoag land), living in Oakland, CA (Ohlone land). She is the author of Queer & Trans Artists of Color, volumes 1 and 2, and the host and producer of We Want the Airwaves podcast. Find more of her work at artactivistnia.com.

Rachna Contractor: Do you have a favourite interview from either of the volumes? Which one, and why?

Nia King: There are thirty-two interviews, so if I choose a favourite I make at least thirty-one enemies! I can say that Ryka Aoki is a favourite of readers and podcast listeners. She’s in the first book. I really enjoyed talking to Trish Salah for the second book, in part because she’s SO smart and in part because I think she was able to articulate really well why my work matters, which is something I often struggle with. There are a couple quotes in her interview that make me go, “Yes, THIS is why I do what I do!” Here’s one:

“If you’re marginalized, the lesson you encounter, endlessly and relentlessly, is that you have no value. The calculus of what is good art and what is bad art is a calculus of what is valuable. The way in which sex workers and substance users and poor people and racialized people and colonized people and trans people and queer people who are not participating in an economy of a certain kind of value, the way in which our speech and realities exist, is under persistent erasure. I value cultural conversations. I value the way in which the aesthetic allows us to make our lives livable and more than livable: desirable and interesting for ourselves.

“I also think psychic life is messy. There are so many untransitioned trans people out there in the world who don’t transition because their lives don’t seem viable. There are so many Indigenous folks who don’t have status and don’t have relationship to their band. There are so many diasporic people who don’t know their parents’ languages. I also think that culture allows us to articulate our existences in complex ways that don’t bow to the calculus of certain logics of visibility or out-ness, homonormativity, or being a model minority. I think it has the potential to be a profoundly resistant form and to be valuable beyond its capacity to mark resistance.” —Trish Salah
RC: Did you intend for these interviews to be an exercise in documentation of the queer/trans of colour community, or did you set out to share the stories of individuals? This work is endless; will you keep producing volumes?

NK: I think that by sharing the stories of individuals you help paint a picture of a community. The more individuals you interview the clearer the picture becomes, hopefully. I’ve interviewed people involved in sex work for survival and people who work in the White House. The community of queer and trans people of color just within the US is incredibly diverse. Trying to paint a comprehensive picture is almost impossible, but I’d like to keep doing what I’m doing because I think QTPOC lives deserve to be documented. I started this project in order to pick their brains and I still have a lot of brains to pick. I’d like to do a third volume, but I don’t know if I will have enough time, energy, or money. Here’s hoping!

RC: The interviews are transcripts of your podcast, We Want the Airwaves. Why did you decide to publish the interviews as books, and how do you find the two mediums – podcast and text – differ?

Editing audio and editing text are really different. With audio I try to keep the editing pretty minimal. I mostly just edit for listenability, which means taking out long pauses, ummms, uhhhs, and any unpleasant nose and throat sounds (like coughing or sniffling). When you’re editing text, the focus is on readability. A lot of people don’t finish their thoughts and sort of let their sentences trail off, so editing that sometimes means reconstructing their thoughts into sentences that are clear and easy to read. All of the artists get to see the edits we make and sign off on them before they go to print, which is how we avoid changing the intended meaning of their words.

RC: I feel like the term activist can also be applied to most of the subjects. How do you define “artist” when considering who to include in the podcast/book?

NK: I’d like to think my definition of artist is pretty broad. The new book has a lot of writers and musicians, a game designer, a painter, a journalist, and a couple filmmakers. The first book had a stand-up comic, a cartoonist, a burlesque performer, and a drag queen (just to name a few). I don’t really believe in differentiating between high art and low art. I think “low art” (for instance, drag, stand-up, comics, and burlesque) is often more accessible to low-income folks and people of colour than the kind of art you see in museums. I would like to see it be taken just as seriously as a mode of cultural production.

RC: You and I have exchanged a lot about Bollywood—through Twitter, by email, and in person. What does Bollywood mean to you? Why are you so taken by it? What do you find in Bollywood that you don’t get elsewhere?

NK: To me, Bollywood means being able to watch a three-hour movie and not see a white face. Roles for people of colour in Hollywood and on TV in the US are getting better, but they’re still pretty limited in terms of the types of stories being told about POC. I like Bollywood because there are lots of different types of stories being told AND almost everyone is brown. I also love the colours, the costumes, the cinematography, and of course the singing and dancing. Bollywood suffers from a lot of the same problems as Hollywood does: racism, colorism, sexism, homophobia, etc. But there’s also a lot of same-sex intimacy on screen in Bollywood movies, especially between men. Even though the characters may not be explicitly gay, it’s cool to see dudes holding hands or giving each other a kiss on the cheek without a big thing being made of it. I think I read a lot of gay subtext into movies where it may not necessarily be intended, but that’s the fun of movies. You can kind of read them however you want to.

RC: You’re touring next year; tell us more about where people can catch you.

NK: My co-editor Elena Rose and I will be at Bluestocking Books in NYC on April 18, Red Emma’s in Baltimore on April 19, and the Harvard Bookstore in Cambridge, MA, on April 21, and we have a still-to-be-confirmed date in Philly. It’ll either be April 17 or April 20 but the venue hasn’t been decided yet. The best way for people to find out if and when we’re coming to their city is to follow me on social media @ArtActivistNia.

Rachna Contractor is Reviews Editor for Plenitude Magazine. She has written about literature, art and culture for Xtra, Wiqaable.com and Kala Magazine. She earned her BA in Art History from the University of Toronto. After a decade of working in communications, Rachna moved to the hospitality industry. She is C0-Director of Unforked, a monthly salon that connects food, culture and ideas in Toronto.