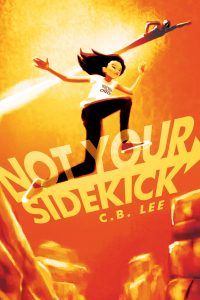 In C.B. Lee’s Not Your Sidekick, Jessica Tran is a non-superpowered teenager who just wants to live up to her superhero lineage. Despite not having powers, she decides to take a paid internship and work for her city’s most notorious supervillain in order to make her college applications look good. As she works alongside her secret crush Abby, and her fellow intern known only as “M,” she discovers a sinister plot that changes everything she knew about superheroes and villains.

The first thing that drew me into the book is its futuristic world, especially the city of Andover. The sci-fi elements come not only from having superheroes as the norm, but also from the advanced technology: self-driving cars, small robots that serve as maids, and computers with holographic screens. There is also an intriguing backstory about how the society of superheroes came to be, which adds an underlying dystopian element. For the most part, the setting is dazzling in a way that is reminiscent of the animated superhero film The Incredibles.

A world where superheroes and villains are the norm is entertaining. The superheroes play on tropes typically associated with them, including comic books, movies, and secret identities. They also have a class system for superpowers similar to the system for having a driver’s licence. The more powerful your superpower is, the higher your class. By adhering to norms and regulations, they are able to promote themselves and maintain a status quo in society, one that is eventually questioned by Jessica. Not only does this pay homage to the superhero genre, but it also deconstructs it by considering what makes a hero and what makes a villain.

Besides the world-building and unique spin on superheroes, there is also a great cast of characters. As a main character, Jessica is inspiring and likeable. Even though she feels out of place sometimes, she knows she can still do great things and that is admirable. She is also quirky—good at writing and geeky about superheroes, collecting comics, watching films, and spouting facts about her favourites. Having her be so excited about superheroes despite not having powers shows how dedicated she is to fulfilling her desire to be a hero.

Jessica is both biracial (Chinese and Vietnamese) and bisexual. While the book features authentic scenes that show how she navigates both of these identities, it also doesn’t make the entire story about her biracial identity. The same applies to Bells, Jessica’s Haitian, transgender friend, whose identities are woven into the story in a way that is natural and unforced. For readers who have multiple marginalized identities, this validates their experiences without reducing them to struggles.

In addition to Jessica and Bells, Abby is another well-developed, enjoyable character. At first she seems to be the typical unattainable pretty love interest, but there is more depth to her. Abby is many things: smart with electronics, caring toward her loved ones, and complicated in a way that earns sympathy. As Jessica’s love interest, she is sweet and considerate, and seeing her relationship with Jessica grow from co-workers to friends to lovers is refreshing and heartwarming.

The only flaws I found in the book were the pacing and the lack of development for Jessica’s other best friend, Emma Rios. The book’s pacing slows down considerably after we are introduced to Jessica Tran and her world, especially when Jessica starts working at her internship. Though it’s an internship that involves working for a super-villain, not much happens other than Jessica befriending “M” and Abby. Maybe my expectations were too high, but I thought we would see Jessica running into important people associated with the super-villain or have someone in the superhero world cause trouble for Abby at work.

When it comes to Emma Rios, she came off as a little superficial because she doesn’t have a lot to do in the book. Latina representation is meaningful, and she is a great friend to Jess. However, there should’ve been more to her than getting excited about attractive superheroes and being Bell’s love interest. Toward the end of the book, she states that she, Jess, and Bells could be a great superhero team, but she needs more character depth in order to contribute something valuable. It is possible that her character development got sidelined to make room for Jess, Abby, and Bells. Since the upcoming sequel Not Your Villain centres on Bells, hopefully Lee will add depth to her character as Bells tries to tell her his feelings.

Although Not Your Sidekick is a book with great characters, world-building, and a lovely queer romance, the book’s plodding pacing might prevent less dedicated readers from finishing the book. Nonetheless, Not Your Sidekick is an entertaining read that provides much-needed representation and a creative twist on the superhero genre.